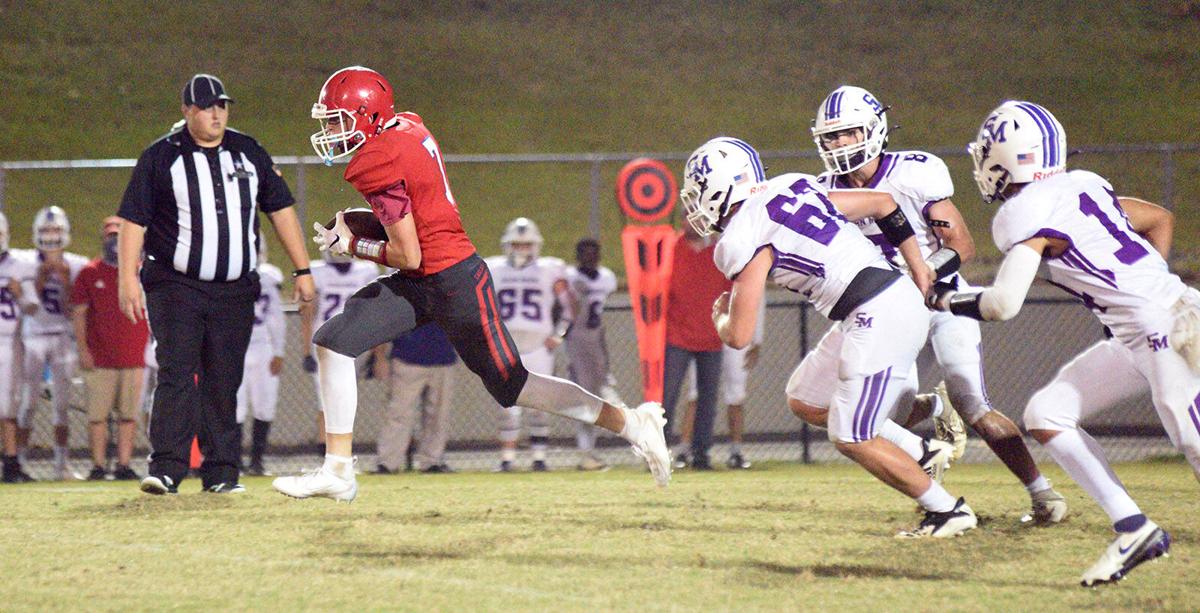 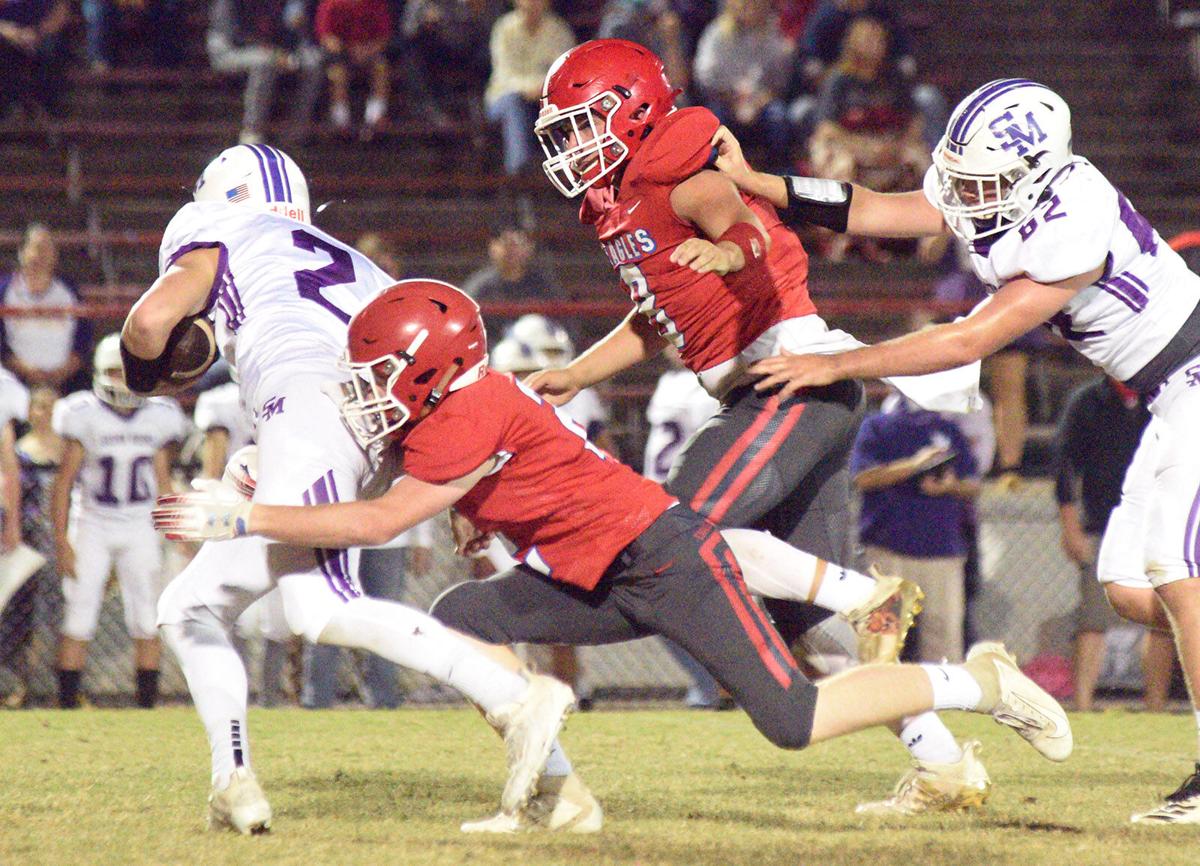 Vinemont's Jarrett Friedrich and Tanner Brown combine for a sack. 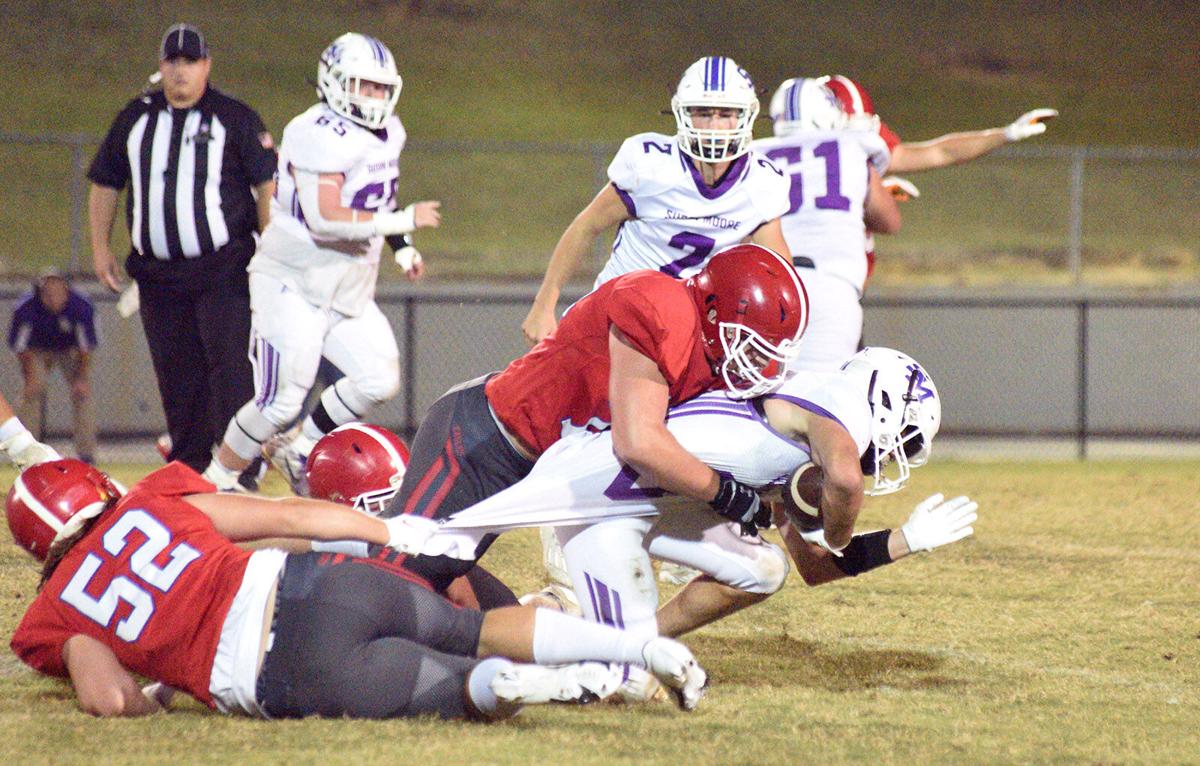 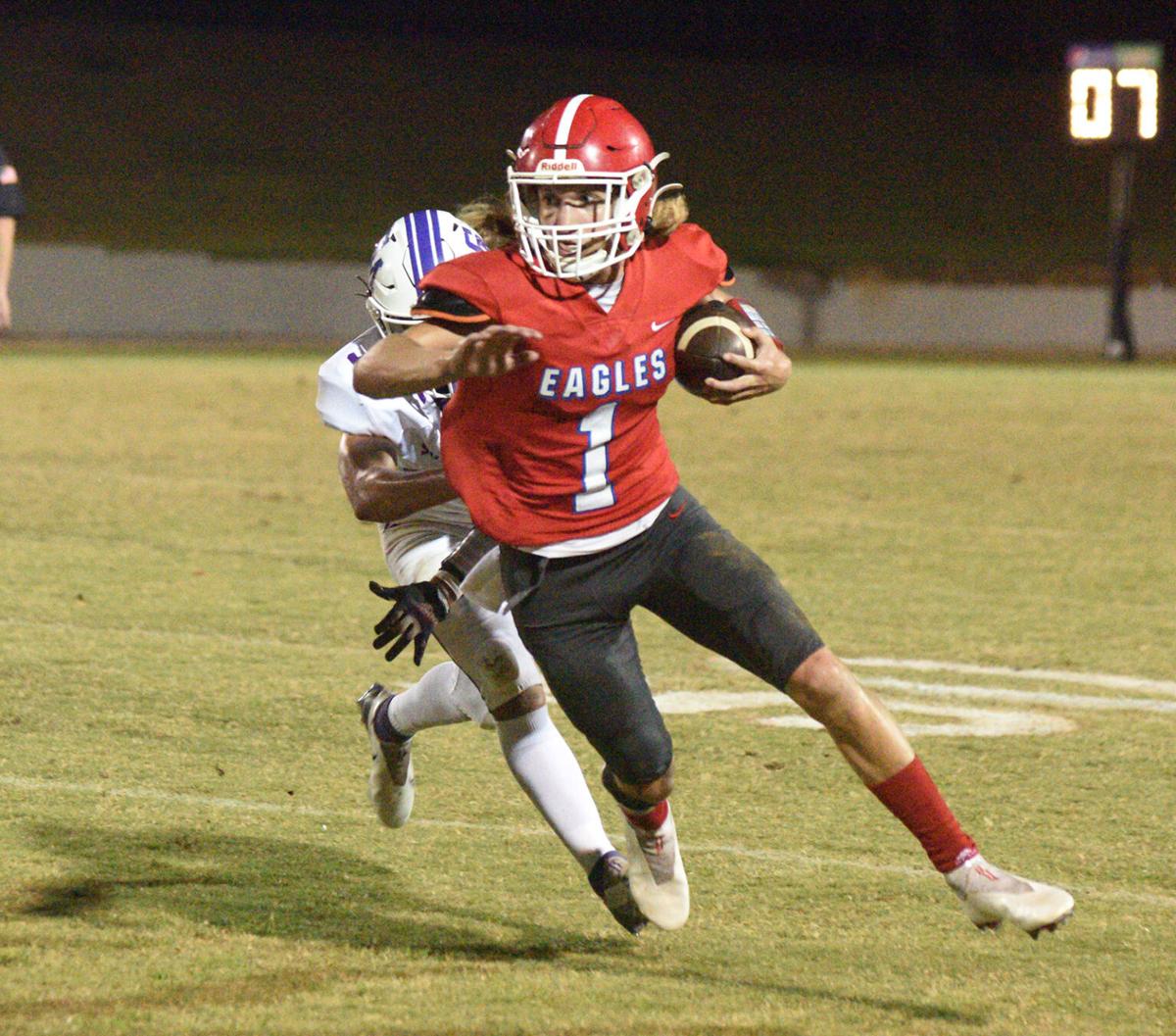 Vinemont's Jarrett Friedrich and Tanner Brown combine for a sack.

Vinemont inched closer to its first postseason appearance in six years after registering an impressive 21-7 triumph over Susan Moore at Eagle Stadium on Thursday night.

Vinemont, which improved to 4-3 overall and 3-2 in Class 3A, Region 6, scored 21 unanswered points after a first-quarter deficit, while the Eagles’ defense put together a strong performance.

“The second half was probably the best half we’ve put together since I’ve been here. We overcame some mistakes in the first half and played disciplined football after that. It’s a huge confidence booster for us. We beat a good, physical team,” said fourth-year coach Stephen Robinson. “Our defense played great all night. It could prove to be a huge win for us down the stretch.”

Susan Moore scored the game’s first touchdown with 9:47 remaining in the first quarter, earning a 7-0 lead.

Vinemont answered in the second quarter on a Colby Miller touchdown. The Eagles missed the extra point, and Susan Moore maintained a 7-6 edge at the break.

Vinemont notched a pair of rushing touchdowns in the third quarter. Brodie Curvin accounted for the first at the 5:10 mark, and the Eagles added a 2-point conversion to seize a 14-7 lead.

Miller added his second score of the night with 1:13 to go in the third, extending Vinemont’s advantage to 21-7.

Vinemont’s defense never allowed Susan Moore to muster any momentum in the second half.

Vinemont hosts Oakman next Friday in another pivotal region game.

Will Cochran accounted for five touchdowns (three passing, one rushing and one receiving), and Jacob Dye added two receiving touchdowns in the first meeting between the two teams.

“We put it together on both sides of the ball. I’m proud of our guys for going out there and building upon last week’s win. This one gives you an extra confidence boost,” said West Point coach Don Farley. “We didn’t play the cleanest at times, but our effort was great overall. Our effort has been there all season.”

Cochran rumbled 13 yards for West Point’s initial touchdown with 59 seconds remaining in the first quarter, tying the game at 7-all.

West Point dug into the bag of tricks early in the second quarter as Kobe Bowers found a wide-open Cochran for a 48-yard touchdown pass. The Warriors led 15-8 at the 11:51 mark.

Bowers and Cochran reverted to their traditional roles later in the quarter when Bowers hauled in a 35-yard touchdown pass from Cochran, giving West Point a 22-7 advantage at the half.

Kelton Washington rushed for a 13-yard score with 8:44 remaining in the third for the Warriors, and Cochran tossed a pair of touchdowns to Dye before the quarter closed. Dye’s receiving touchdowns went for 35 and 13 yards, respectively.

West Point will seek its third win in a row next week against Douglas.

After trailing 27-14 at the break, Addison’s defense buckled down and kept Lamar County scoreless in the second half.

Meanwhile, the Bulldogs (5-3, 4-1) went to work offensively after halftime, posting 28 points. Addison seized its first lead, at 28-27, early in the fourth quarter on a 3-yard touchdown run by Weston Smith.

Quarterback Christian Roberts added a pair of touchdown runs (70 and 1) in the final stanza, helping Addison keep pace at the top of the region standings.

Roberts threw a 40-yard touchdown pass to Tommy Lee Daniel in the first quarter, briefly tying the game at 7-all.

Nelson Martin had a 25-yard touchdown run for the Bulldogs in the first half, and his second score of the night in the third quarter chipped away at Lamar County’s lead.

"We didn’t chew them out at halftime,” Addison coach David Smothers said. "I just asked my punter how many times we had punted. He said none. And then I asked, ‘What does that tell you guys?’ We basically just stopped ourselves. That was the ugliest first half of football, but we found our composure and got that first stop in the second half and went from there. I was proud of how we came out and took care of business and focused and got the job done in that second half."

Addison dips out of region play next week, traveling to Hamilton.

The 10th-ranked Raiders are off to a 7-1 start for the third straight season.

Malin had rushing touchdowns of 20, 40 and 35 yards. He added a 45-yard touchdown through the air to Paydon Bagwell with 1:13 left in the first half, handing the Raiders an 18-7 advantage.

Good Hope led 18-10 at halftime and pushed the cushion to 25-10 in the third quarter on Malin’s 40-yard scoring run. The Raiders then held off the Wildcats down the stretch.

Colton Bagwell had a 25-yard rushing touchdown for Good Hope in the first half.

"I’m proud of our guys for their ability to keep fighting," Good Hope coach Alan Scott said. "It wasn’t easy tonight, and it wasn’t pretty at times. But Fultondale has a very athletic team, and I’m very thankful to come out of there with a win."

Good Hope hosts Dora next week, seeking its first win in seven tries against the Bulldogs.

The seventh-ranked Blue Devils notched their second shutout of the season, cruising at Ray Talley Stadium for a Class 4A, Region 6 win.

Winfield cruised to its fifth consecutive victory on Thursday night.

The Pirates scooted out to an early 14-0 lead by the end of the first quarter and pushed it to 21-0 at the 9:55 mark of the second quarter.

Winfield pulled away from there. The Pirates led 35-8 at the half and 49-8 at the end of the third quarter.