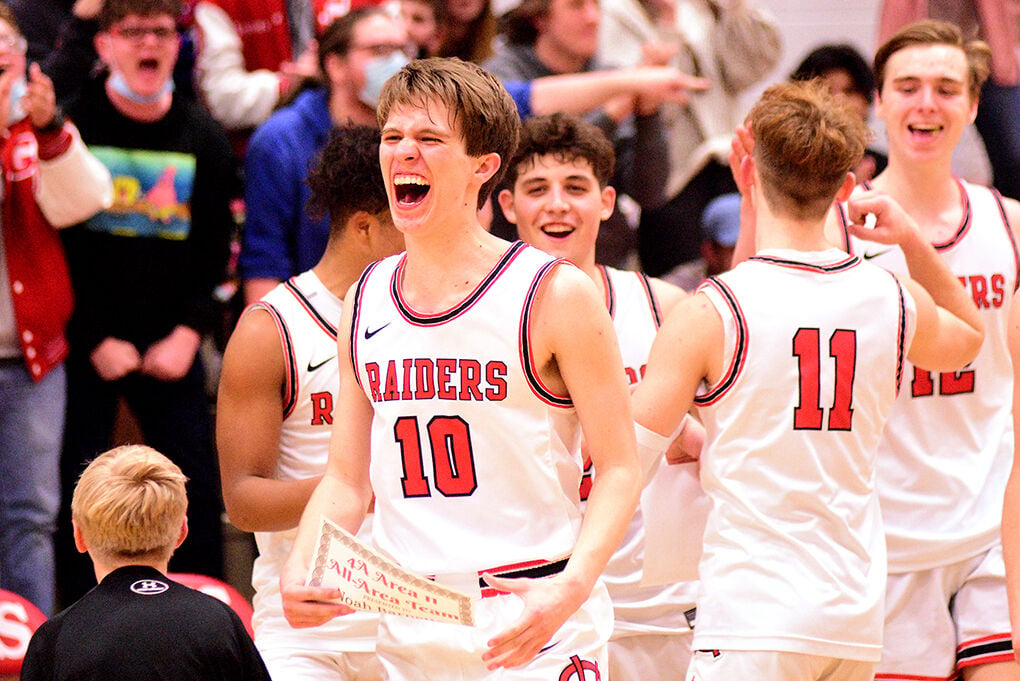 Good Hope’s Noah Barnette is all smiles as the Raiders head to pick up the trophy on Friday night. 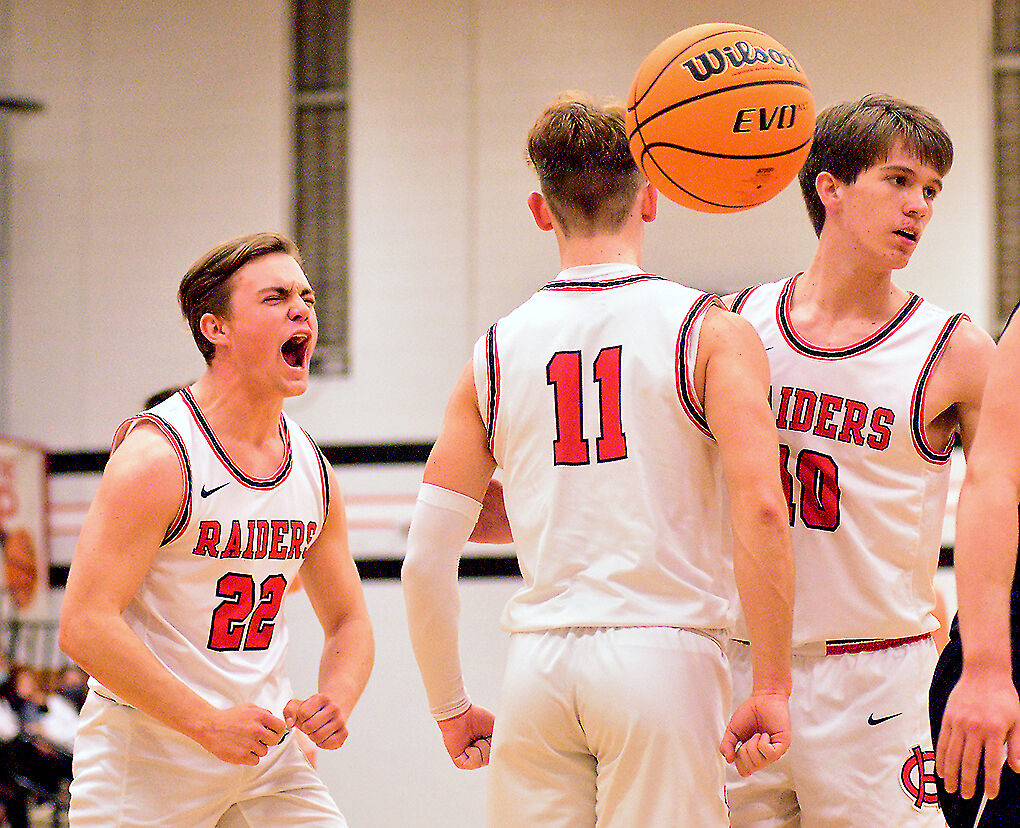 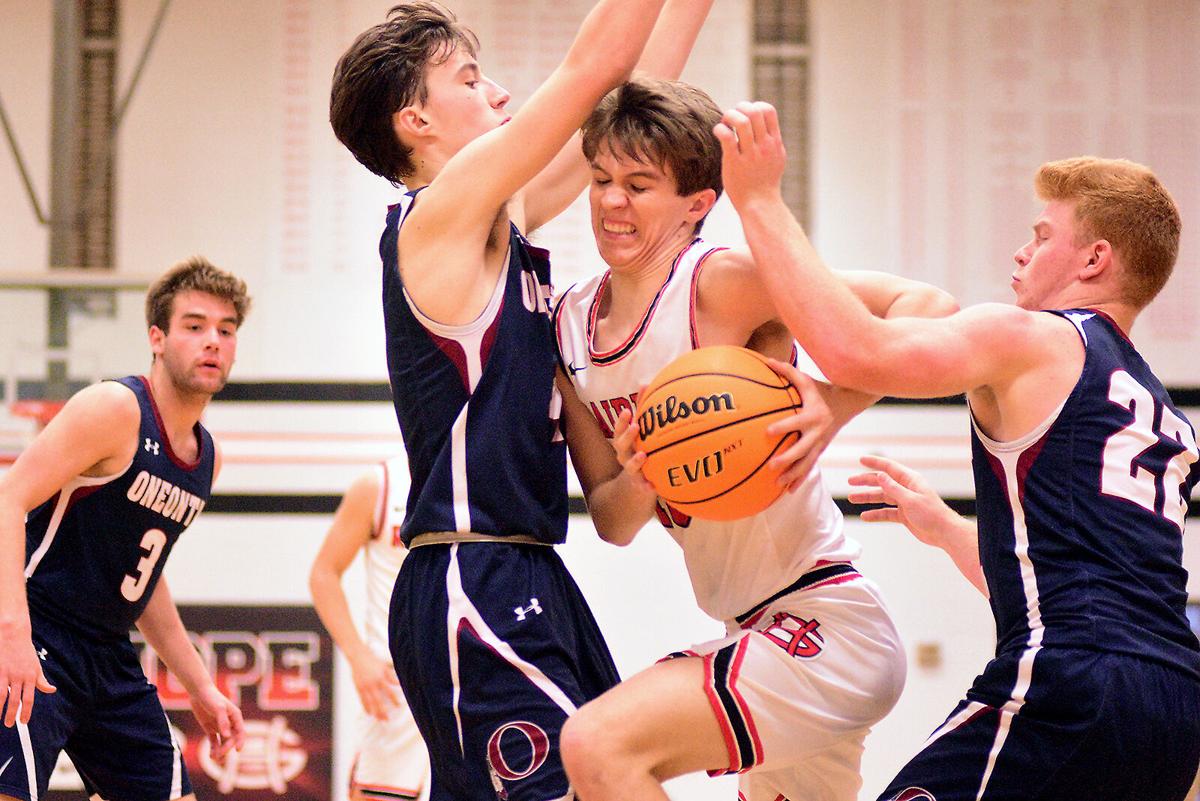 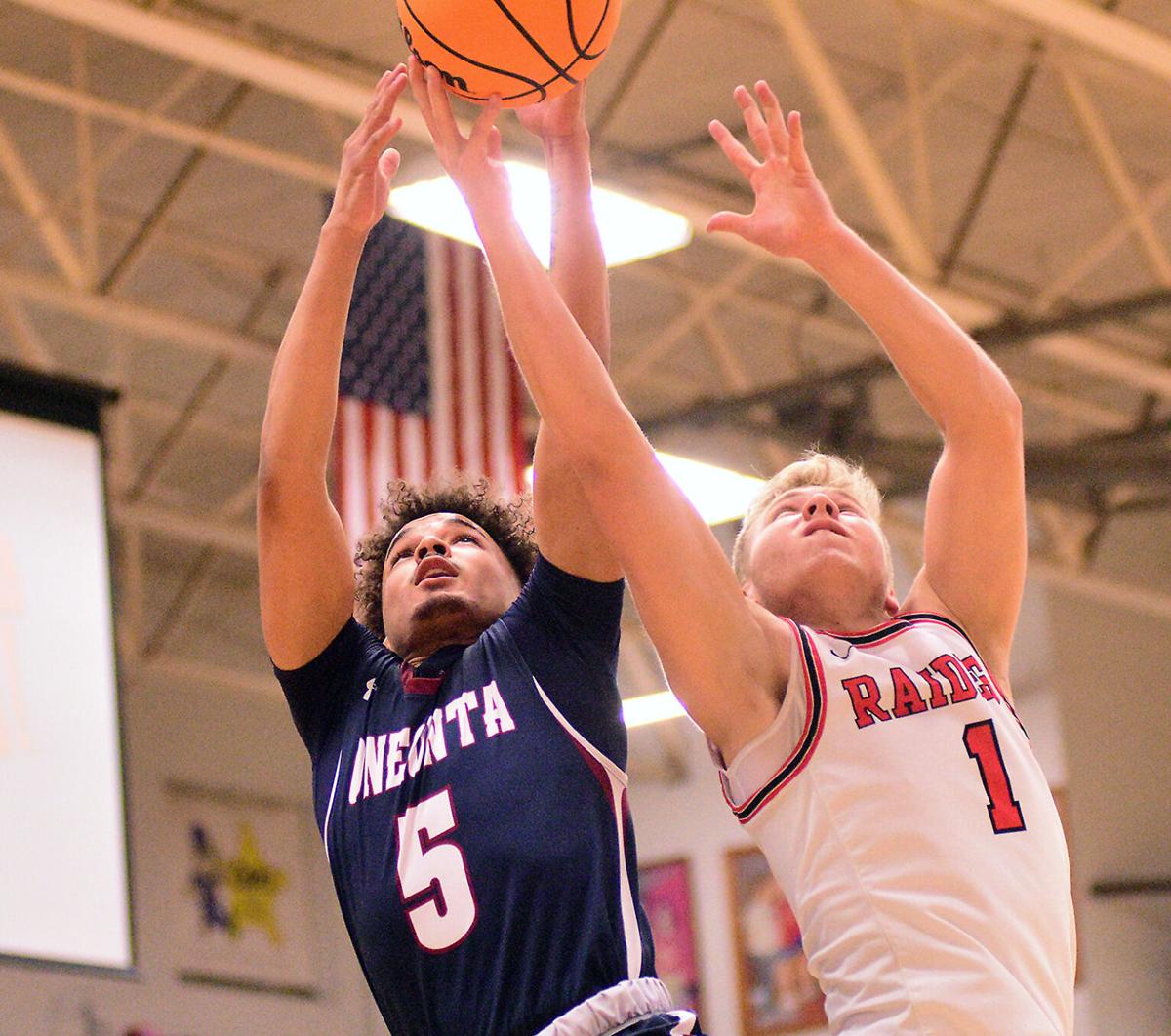 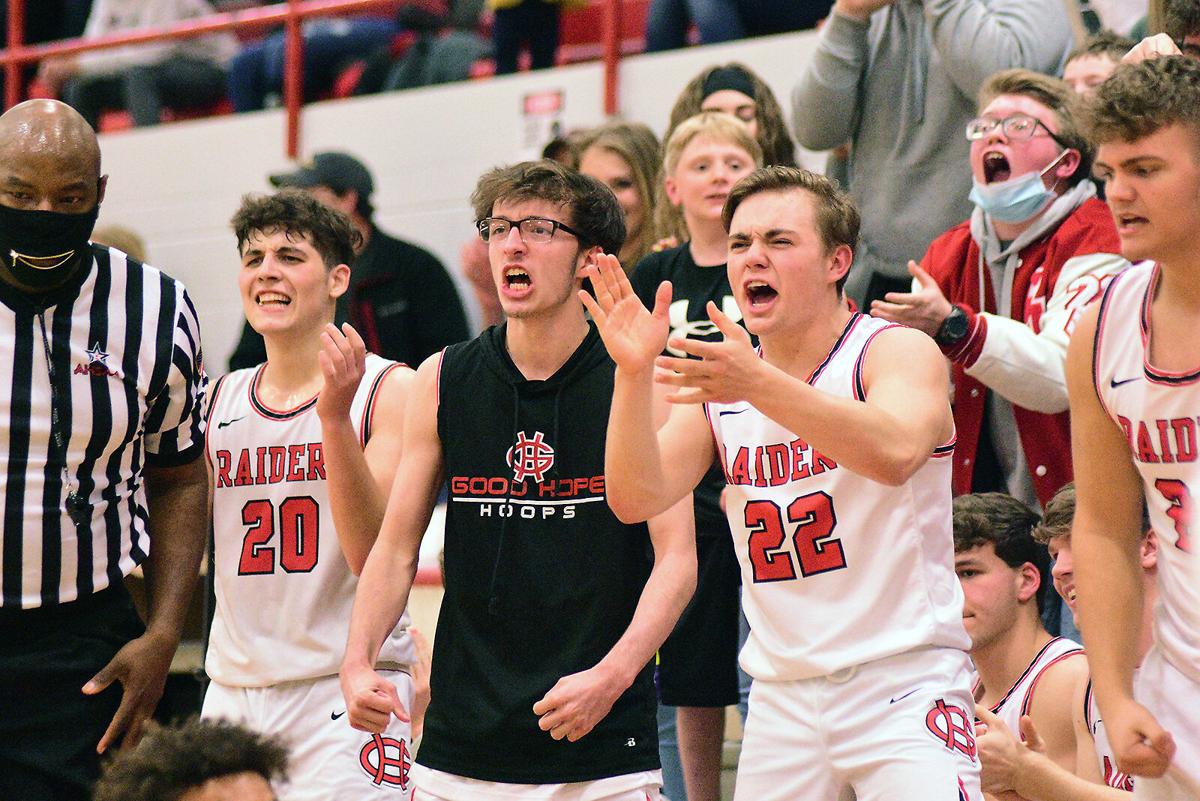 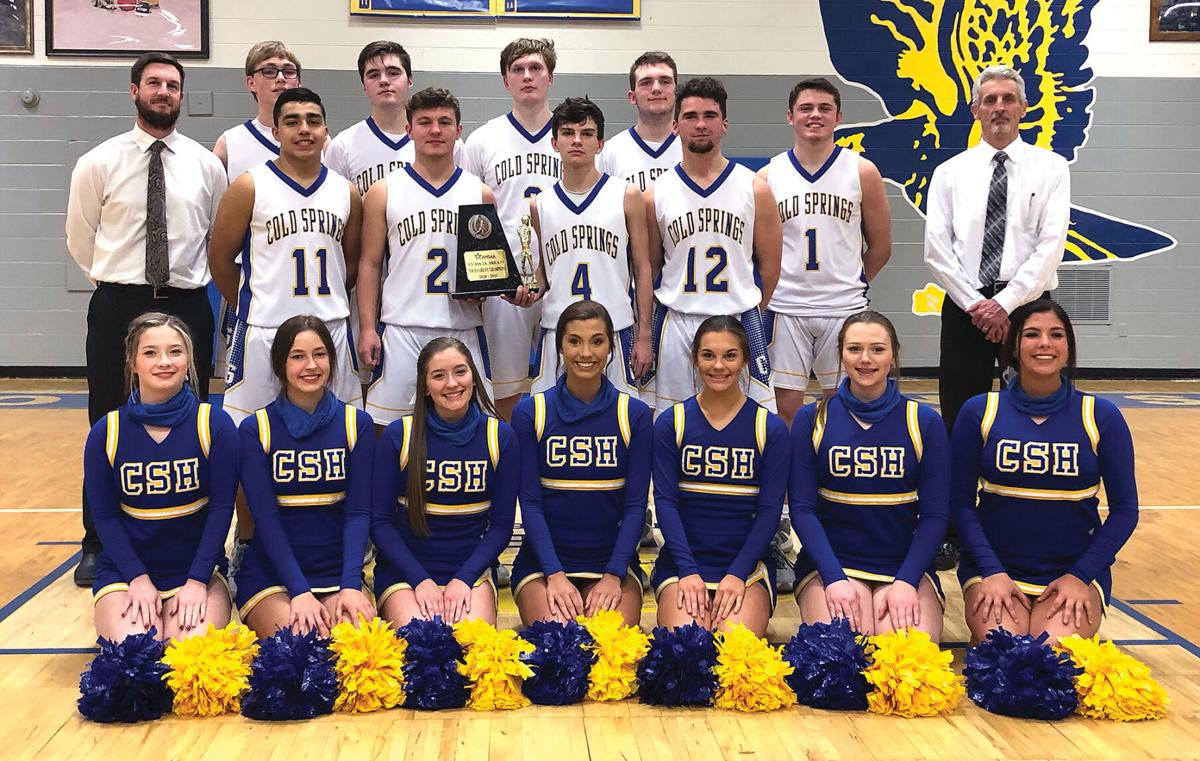 One last stop, one last burst of energy, one last ounce of grit — and the Raiders would be champions, simultaneously erasing a series of close calls and heartbreaking losses the past few seasons.

It came down to one close miss.

Tanner Malin amassed a game-high 19 points — making some clutch buckets late — and Good Hope steeled its resolve on Oneonta's final possession, forcing an off-the-mark 3-pointer for a 50-48 win in the championship game of the Class 4A, Area 11 Tournament.

It's the first area tourney title for the Raiders since the 2009-10 campaign.

And it couldn't be sweeter, even if Drew Adams' thoughts turned sour late.

"We've played Oneonta nine times in the last three years, and eight of the nine have gone down to the wire," the Good Hope coach said. "In those moments, as a coach, you always think that shot's going in. And I really felt like we had done enough things to give them a shot to do it. So, when the ball goes up, all I can think about is how we would feel if that goes in.

The teams duked it out over a full 32 minutes in a matchup worth the price of admission.

The Raiders eventually led 46-43 — and that's when Malin made his presence known.

He scored inside to bump Good Hope's lead to five at the 1:16 mark and then answered an Oneonta 3 with yet another basket to put the Raiders in front 50-46 with 47 seconds remaining on the clock.

The Redskins, though, battled back, trimming their deficit to two (50-48) following a pair of missed free throws and then forcing a turnover with less than 10 seconds left to put themselves in a position to win.

Not ideal, but nonetheless fun. At least, for Malin.

"It's the best feeling ever," he said. "Knowing that one stop, one shot will change the outcome of the game. It's the best, especially when you're on the good side of it."

Malin and Co. made sure of that, sprinting to their spots on that last, pivotal possession and forcing a semi-contested 3-pointer — Noah Barnette closed out hard — that ultimately missed its mark as time expired.

"When the ball's in the air, it's just hope that it doesn't go in," Malin said. "When it fell off, it's then just the realization that we finally won after losing the past two years. And we finally got over the hump of beating Oneonta and winning an area title."

According to Adams, the final stand was merely a microcosm of his team's effort on Friday night.

"I really thought we grinded out some tough defensive possessions," he said. "Yeah, we've got to score more than them, but this is all about grinding out possessions, grabbing rebounds and limiting Oneonta to just one shot. That's what it came down to in the fourth quarter.

"Offensively, 11 (Malin) had a lot to do with it, too. I'll put that kid up against anybody around here."

Malin, Barnette, Lindsey and Farr were all named to the All-Area Team.

See below for next week's sub-regional matchups involving local teams. All games will tip at 6:30 p.m.