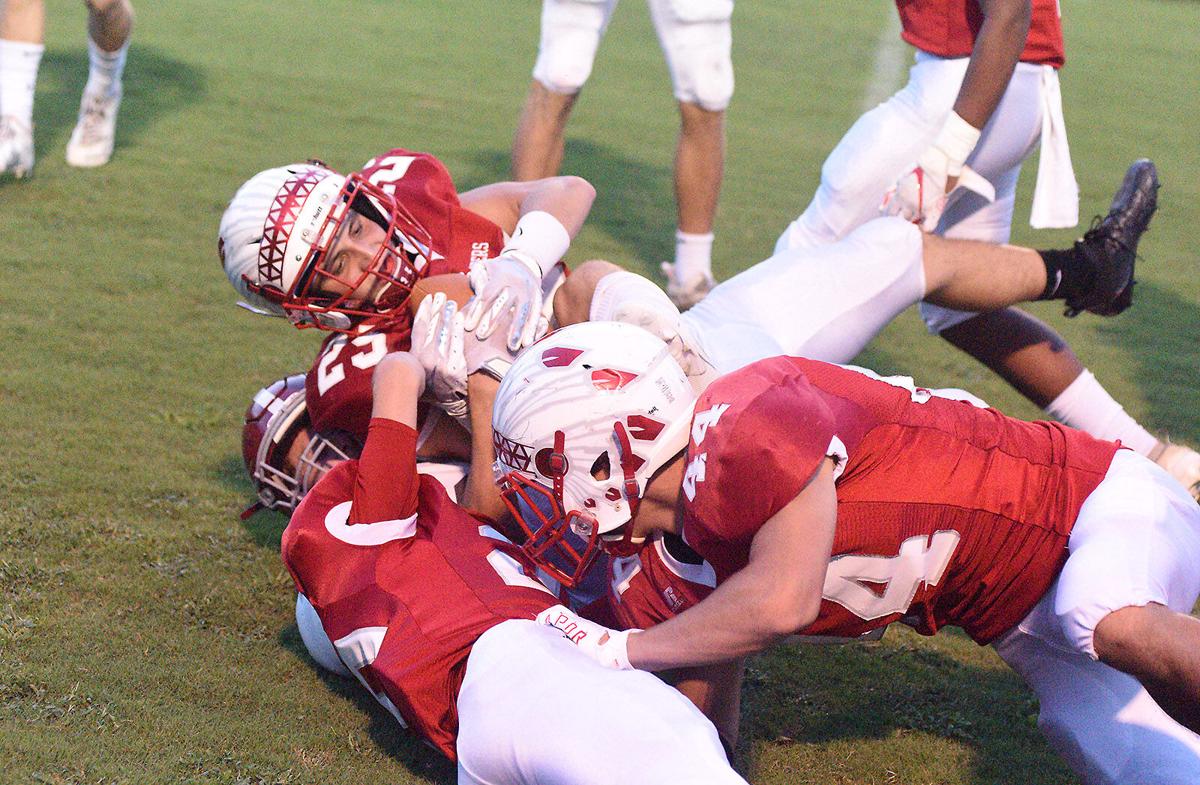 Good Hope's Michael Owens fights for the ball in the first quarter. 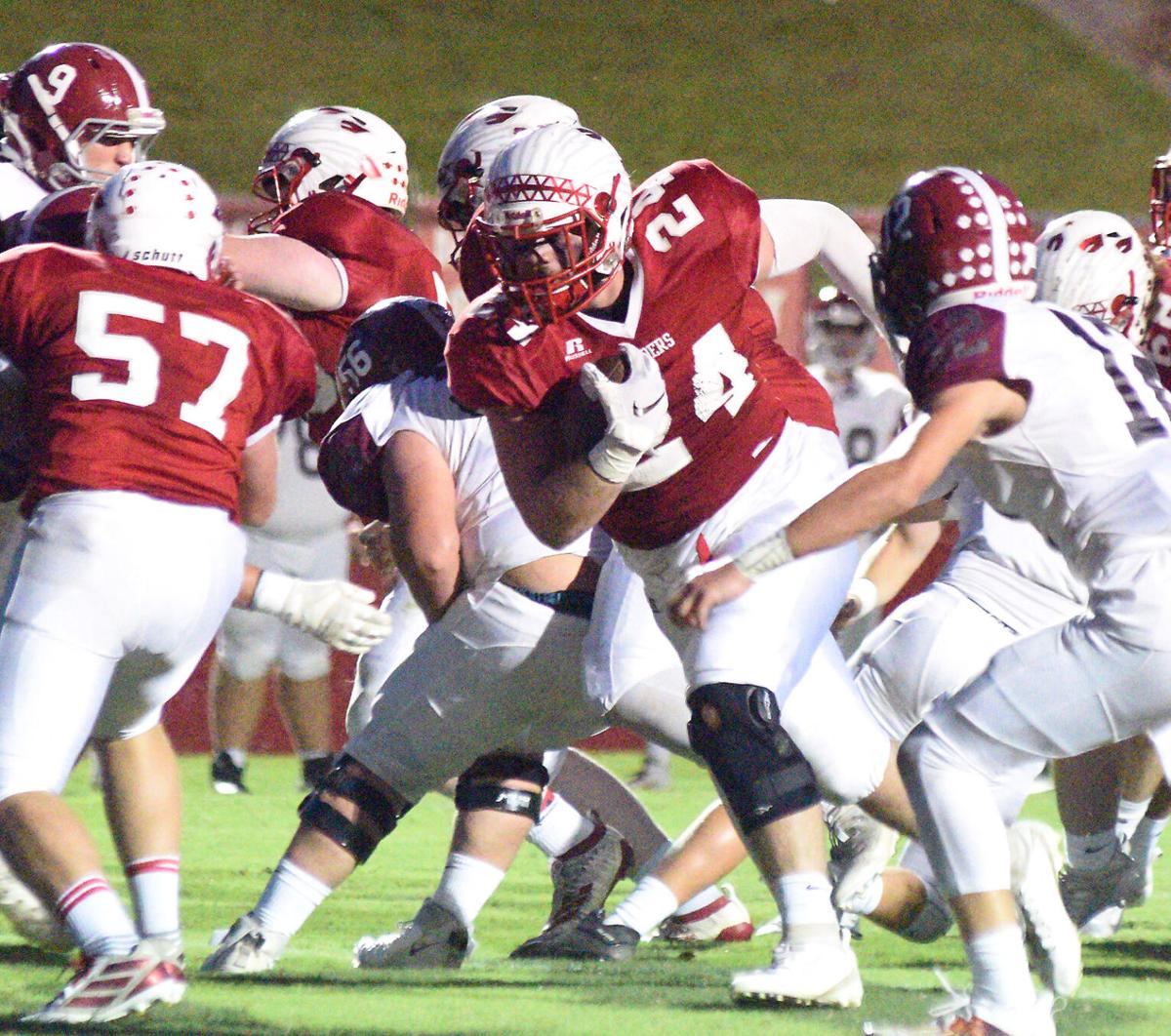 Colton Bagwell breaks through for a Raider touchdown in the first quarter. 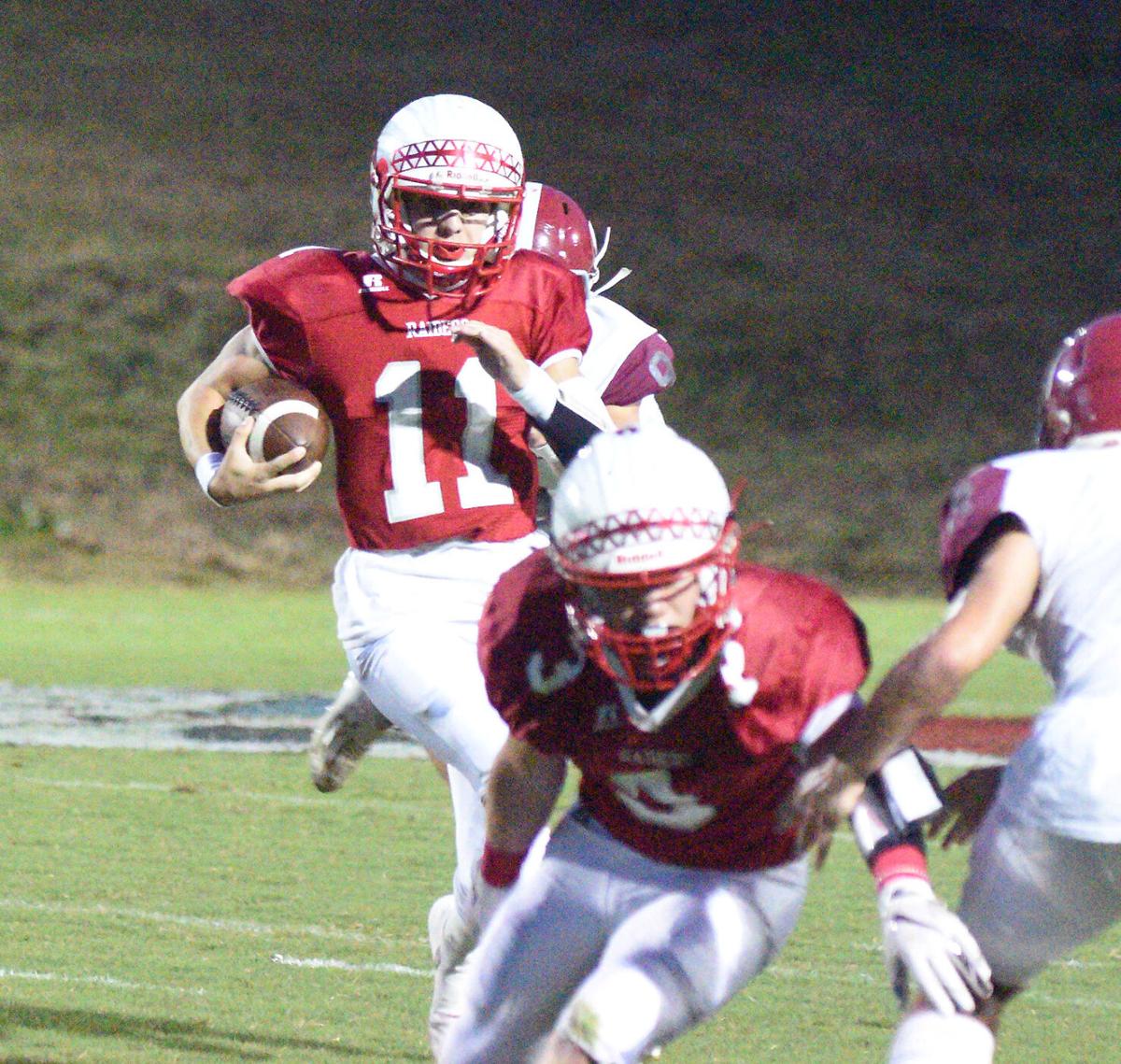 Good Hope's Michael Owens fights for the ball in the first quarter.

Colton Bagwell breaks through for a Raider touchdown in the first quarter.

Good Hope and Haleyville swapped leads six times and neither seized more than a four-point lead throughout.

"Our guys showed a lot of character and responded to adversity, especially in the fourth quarter. We had two touchdowns of more than 60 yards called back in the fourth, and anytime that happens and you let it roll off your back, it shows how resilient your players are," said Good Hope coach Alan Scott. "We went back to work on the final drive. I'm very proud of my guys."

Haleyville got on the board first with a 68-yard touchdown pass with 7:52 left in the first quarter.

Good Hope answered on its next drive, notching the game at 7-7 after Bagwell scored a 6-yard touchdown run.

With 56 seconds remaining in the first, Haleyville claimed a 10-7 advantage with a field goal, and that was the score at halftime.

Bagwell's second touchdown with 5:55 left in the third gave the Raiders a 14-10 edge. It didn't last too long as Haleyville used a 12-yard touchdown pass to earn a 17-14 lead with 21 seconds remaining in the third.

But the Lions couldn't contain Bagwell before the stanza ended. He rumbled for 75 yards on the next play from scrimmage and followed with his third score for a 20-17 advantage to end the quarter.

Haleyville cashed in a Good Hope turnover for a touchdown with 8:28 left in the game, grabbing a 24-20 lead.

Good Hope's final drive was the difference as the Raiders dialed up Malin's strike to Burns.

The Raiders are 4-0 for the third straight season under Scott, scoring at least 24 points in all four wins.

"I'm most impressed so far with how hard we play. We preach not to look at the scoreboard and play every play as hard as we can. Our guys remain positive throughout and have an ability to put the negative plays behind them," Scott said.

Good Hope dips back into Class 4A, Region 6 play next week, traveling to Hanceville.

Vinemont set the tone Friday night on the game’s opening drive and never let up.

The Eagles struggled to slow Carbon Hill’s offense to open the game as the away team traveled inside Vinemont’s 10-yard line and threatened to score. However, it was a strong defensive stand that led Carbon Hill to turn it over on downs. From there, the Eagles rolled to a 36-0 win.

Vinemont’s offense didn’t find the end zone until late in the first quarter, but it was Colby Miller that led the way once things got going with three touchdowns and an interception on defense.

“He picked up a couple big third-down plays and even a couple big fourth- down plays,” Vinemont coach Stephen Robinson said of Miller.

Miller gave the Eagles (2-2) an 8-0 lead late in the first quarter, which was extended to a 22-0 lead at halftime after interceptions by Carson Greer and Miller led to scores by Brodie Speer and Ayden Thomason.

Miller added two more touchdowns in the third quarter to help Vinemont coast to a Class 3A, Region 6 win.

The Eagles were scheduled to play Tarrant next week, but the game has been canceled. Robinson says Vinemont is actively looking for an opponent.

Addison used big plays from a handful of players to get a big region win Friday night.

The lopsided home win started well for the Bulldogs with Weston Smith scoring on a 2-yard run in the opening quarter and a 10-yard run in the second to give Addison (2-2) a first-half lead.

The Bulldogs led 18-8 at the half after Christian Roberts hit Cannon Hiller with a 32-yard touchdown reception.

Roberts continued to find success against Midfield in the second half, hitting Justin Mather on a 30-yard score in the third quarter and Tommy Lee Daniel for a 20-yard touchdown in the fourth.

“It’s always big to bounce back after a loss,” Addison coach David Smothers said. “We lost one in overtime last week, and it’s always good to get a win.”

West Point overcame a big deficit, but it wasn’t able to pull out a win in Friday’s Class 5A, Region 7 contest.

A pair of touchdowns by Kelton Washington were the only times the Warriors (0-3) found the end zone in the first three quarters, as they trailed 28-12 entering the final period.

With 9:46 left in the game, Will Cochran rushed around right end to score on a 9-yard run to get West Point to within 10. Three minutes later, Cochran connected with Kobe Bowers for a 95-yard touchdown pass to cut Boaz’s lead to three.

West Point had a chance to win the game, taking over on its own 34 with 2:12 left. The Warriors got as far as the Boaz 30, but a fourth-down Hail Mary as time expired traveled through the back of the end zone.

Hanceville came up short in a Class 4A, Region 6 game to fall to 1-2 on the year. Dora was able to extend its lead to 23-0 before Zach Campbell’s 9-yard run midway through the third quarter got Hanceville on the board.

Friday was not Holly Pond’s night in non-region action. J.B. Pennington (3-0) scored early and often as the Broncos struggled to get anything going.

Holly Pond (1-3) got on the scoreboard late in the third quarter on a touchdown by Austin Marsh.

The Broncos travel to Carbon Hill next week.

Vinemont High School honored its seniors Friday night before the 12 senior Eagle players paid tribute to the victims of the Sept 11, 2001 terrorism attacks.