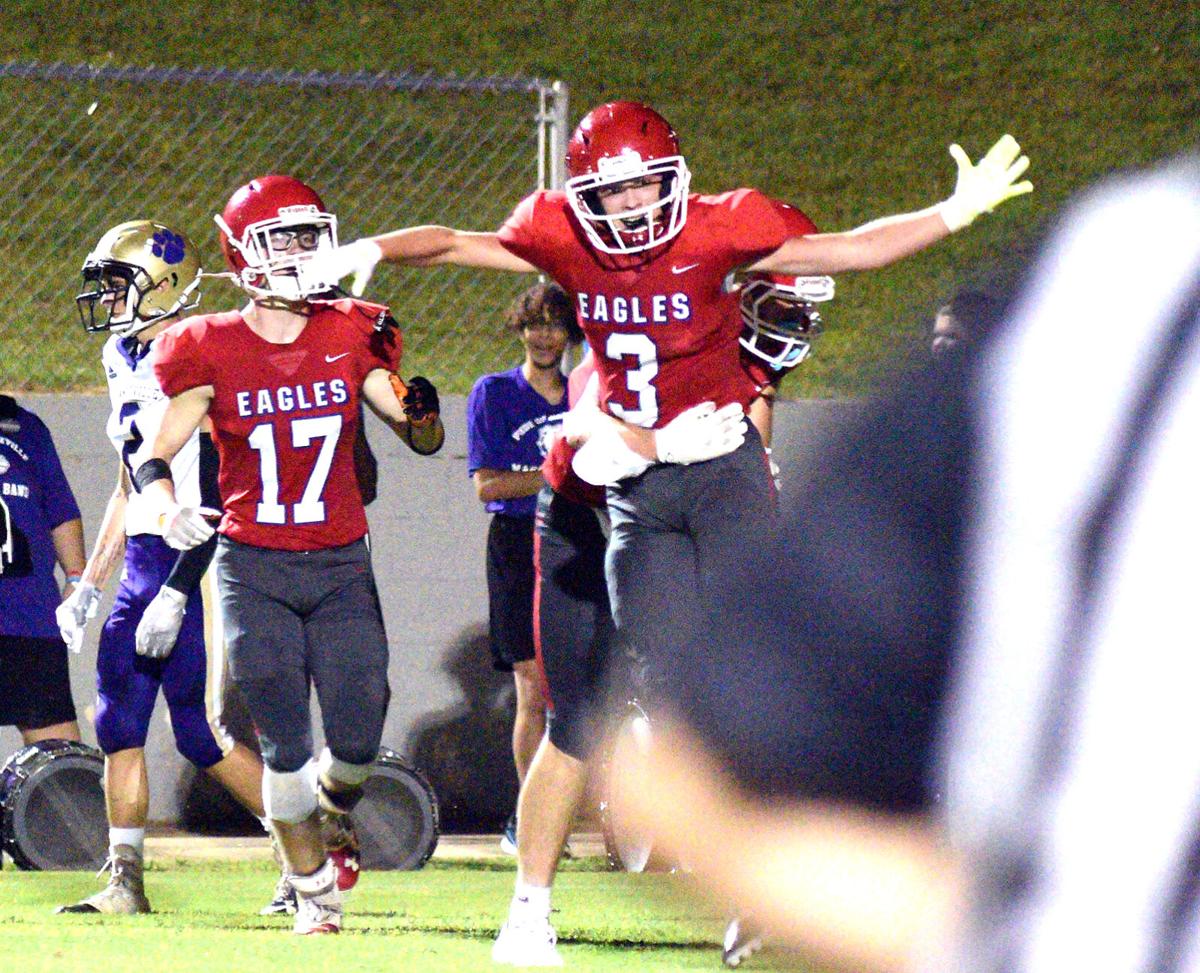 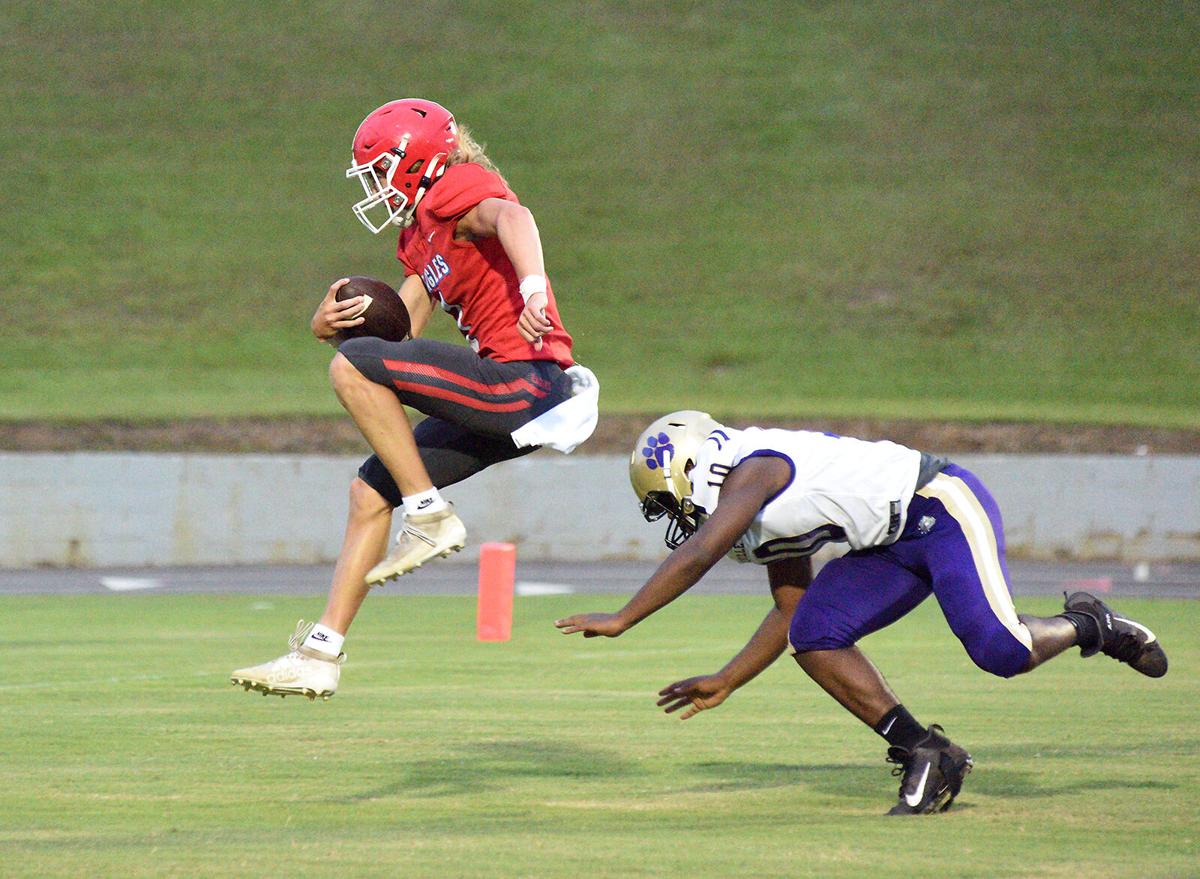 Vinemont's Colby Miller leaps out of reach of Hanceville's Brosnan Ward for a touchdown in the first quarter. 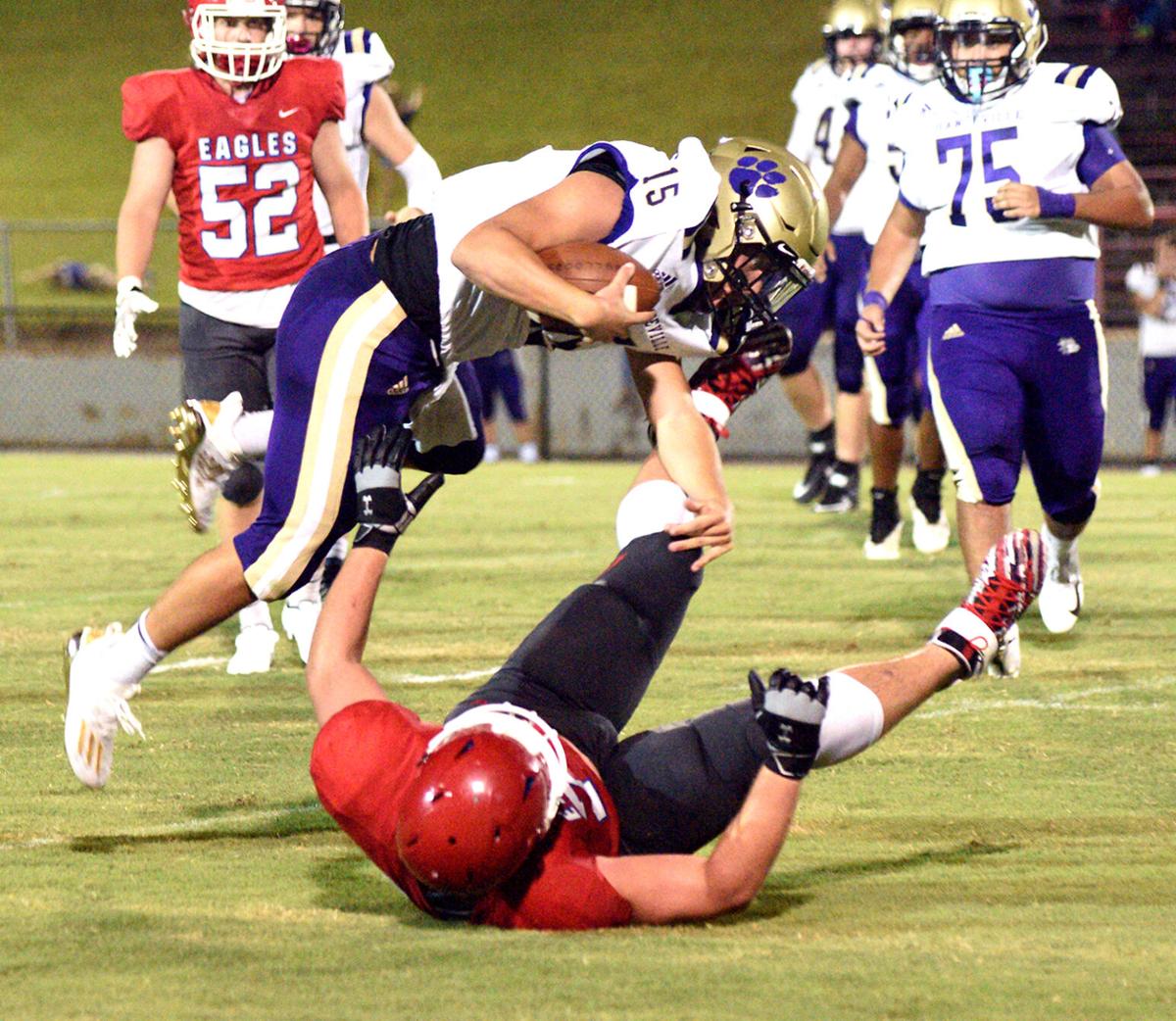 Hanceville quarterback Bo Joles gets tripped up by Vinemont's Isiah Young on the final play of the first half. 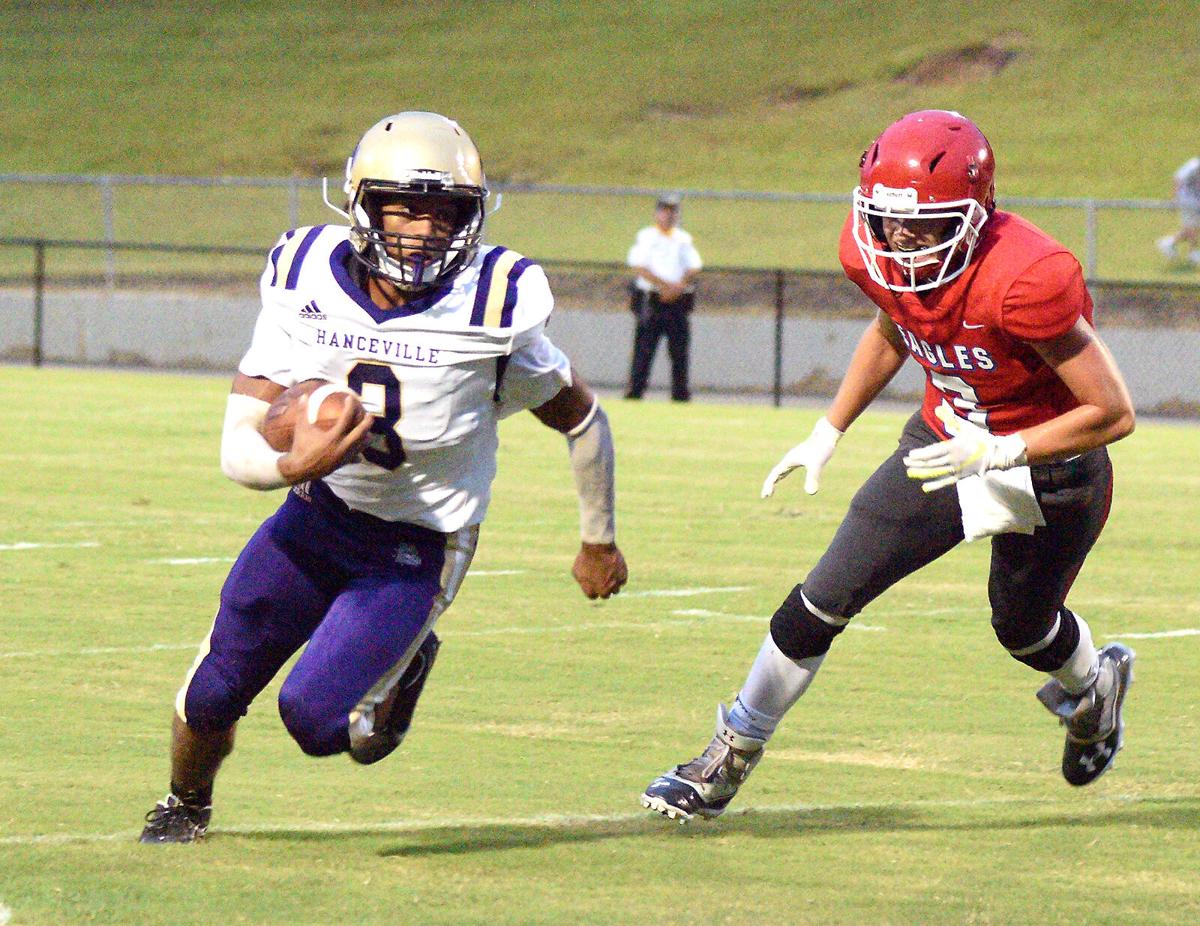 Vinemont's Colby Miller leaps out of reach of Hanceville's Brosnan Ward for a touchdown in the first quarter.

Hanceville quarterback Bo Joles gets tripped up by Vinemont's Isiah Young on the final play of the first half.

After all, the fourth-year Vinemont coach had just watched his Eagles triumph in their season-opening matchup against Hanceville on Thursday night — an instant classic at Mark Smothers Field.

But even more than that?

"The fact that we are standing on grass under lights with fans in the seats playing football again — it's awesome," Robinson said. "It's the best thing."

Colby Miller accumulated more than 250 yards of total offense, Vinemont's defense corralled a critical stop late, and the Eagles outlasted the Bulldogs for a thrilling 31-30 victory.

"It's paid off already with this one."

The Eagles secured a 6-0 lead midway through the first quarter following a 17-yard touchdown dash by Miller, who finished the contest with 210 yards on 31 carries.

Hanceville, however, responded with two scores to close out the stanza and seize a 15-6 advantage.

The first touchdown came after wide receiver Trevor Shadden scooped up a fumble by running back Barrett Hardin — who had recorded 26 yards before losing possession of the ball — and scampered 35 yards the rest of the way to the end zone. Hardin added a 2-point conversion.

Bo Joles followed that up with a 1-yard touchdown run on the Bulldogs' next possession.

Miller, though, took over from there to help the Red and White close out the first half in a big way.

He kept Vinemont's ensuing drive alive after converting a fourth-and-15 with his legs — he registered 18 yards — and the Eagles eventually cashed in with a 1-yard touchdown run by Ayden Thomason.

Miller wowed again just before halftime, connecting on a 32-yard touchdown pass — this one coming on fourth-and-17 — to Kix Johnson with less than five seconds remaining on the clock.

Just like that, Vinemont took an 18-15 lead into the locker room.

"He's a tremendous player," Robinson said of his junior quarterback. "He makes plays when we have to have them. He's cool and calm."

While Miller's play delighted his coach, it served as the foundation for Cody McCain's frustrations.

"We had hands on guys to make tackles and end drives right there twice, but we didn't do it on either one," said the third-year Hanceville coach. "I didn't think we tackled very well tonight. Defensively, that's on me."

The Eagles pushed the lead to 24-15 midway through the third quarter, punctuating yet another long drive with a touchdown — this one, a 27-yard scamper from Isaac Moody.

But the Bulldogs bit back one play later with a 65-yard touchdown pass from Joles to Logan Guthery.

The road team then produced a much-needed defensive stand, turning Vinemont away at the 2-yard line to gain possession of the ball with less than 10 minutes left in the game.

But as they did all night long, the Eagles relied on their experienced — and sizable — offensive line to pave the way.

Miller's 40-yard touchdown run capped off a six-play, 75-yard drive, and Nacho Salgado's extra point pulled Vinemont ahead by a point with 5:04 remaining.

Robinson's squad then came up with a critical defensive stop on Hanceville's final possession — aided by a missed big-play opportunity from the Bulldogs — and sealed the deal with one final first down.

"We've got a big ol' line, and we just rode 'em and rode 'em," Robinson said. "To be able to ride our senior offensive line ... that's what we're counting on. That's the strength of our team. We can't outrun those (Hanceville) guys. They're fast. They've got some stinking athletes. But we could get as far as needed to get to play another day. I'm just fired up right now."

Miller finished 2-for-4 through the air for 45 yards and registered three total touchdowns.

Thomason racked up 92 yards and a score on 20 carries, while Brodie Spear (34 yards) and Moody (31 yards and a TD) also contributed to a ferocious ground attack.

Joles, meanwhile, completed 6 of 13 passes for 117 yards and a touchdown.

Vinemont travels to Fairview next Friday, while Hanceville is off.