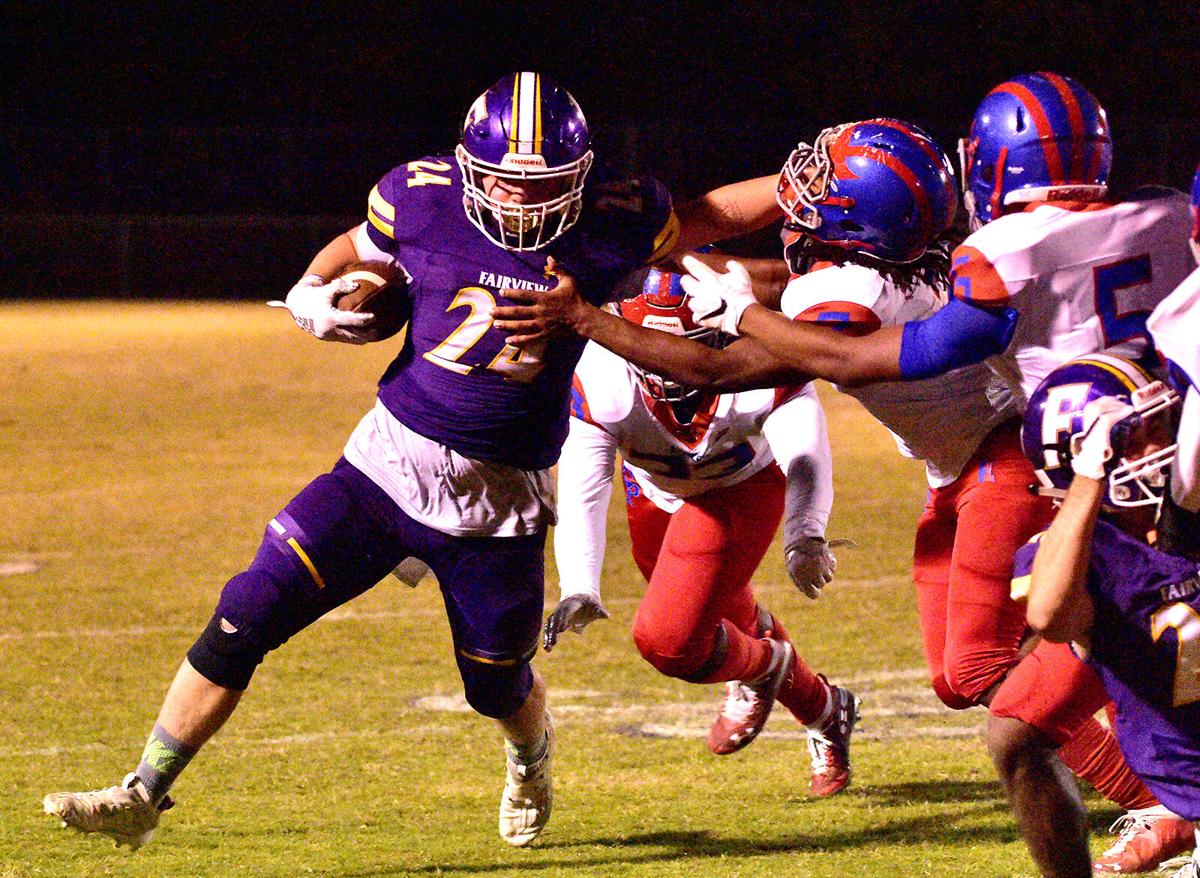 Fairview's Tyler Simmons tries to get away from Center Point defenders. 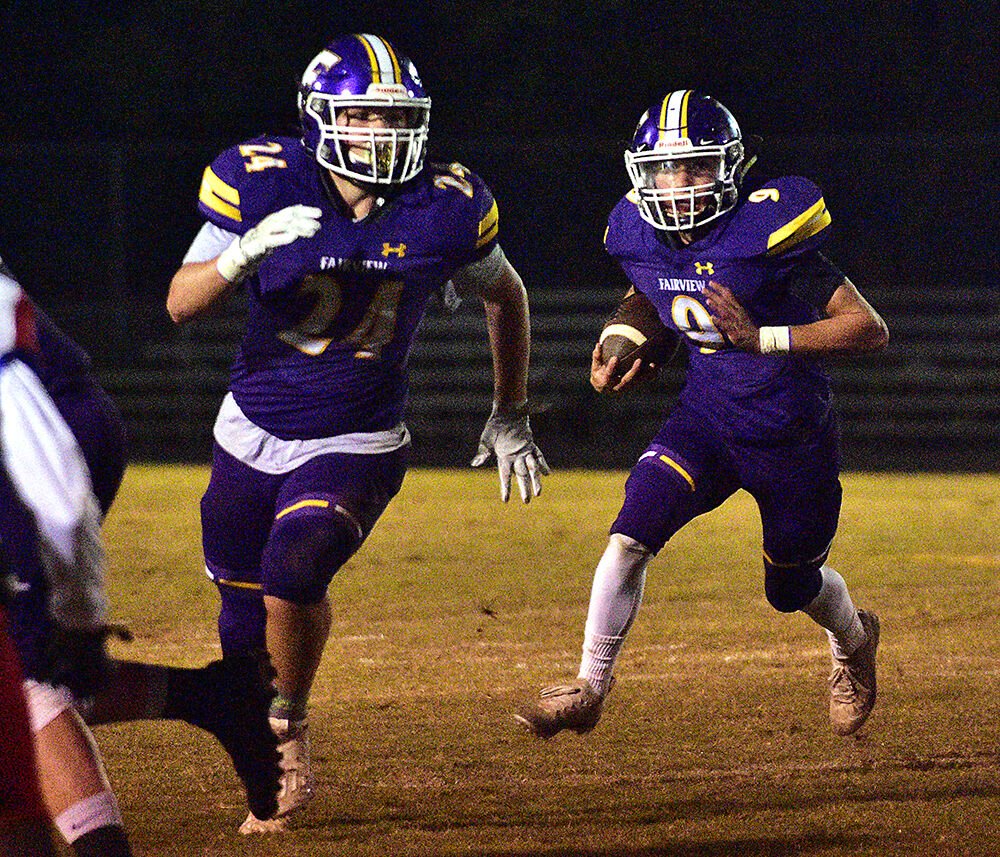 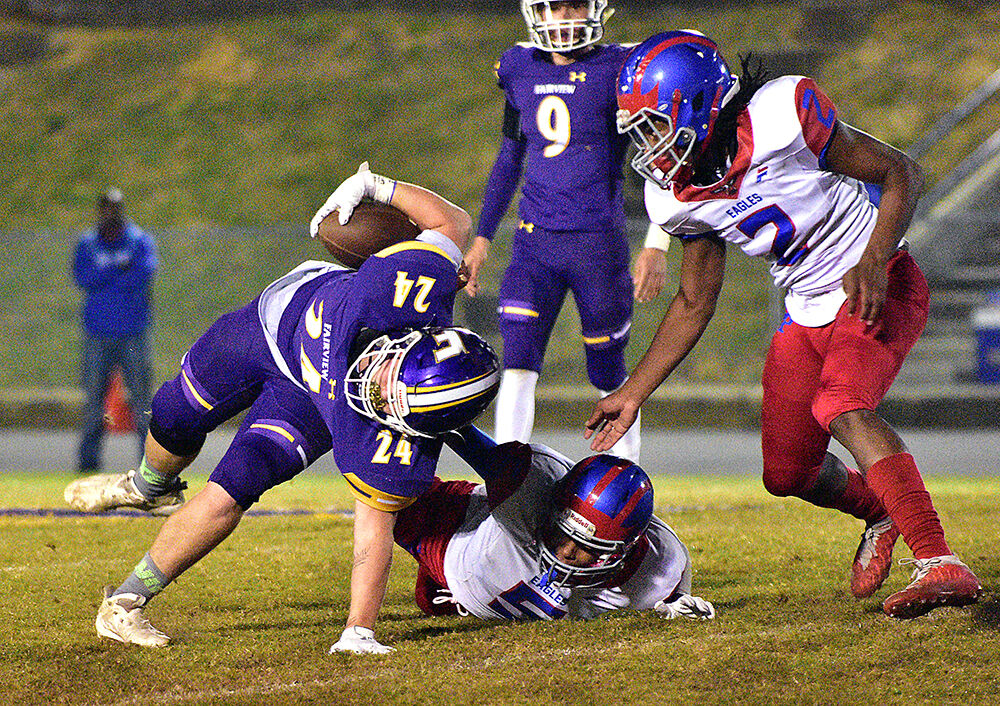 Fairview's Tyler Simmons tries to get away from Center Point defenders.

FAIRVIEW — Bryson Chamness tossed a go-ahead, 19-yard touchdown pass to Parker Martin, Fairview's defense came up with a couple of fourth-quarter stands, and the No. 10 Aggies bested Center Point 27-22 in the first round of the Class 5A playoffs on Friday night.

Martin accounted for three rushing touchdowns as well for Fairview, which improved to 10-1 this season.

The Purple and Gold will head to No. 1 Ramsay — which downed Lawrence County 56-20 — next week.

"I couldn't be more proud of this team," Fairview coach George Redding said. "They're only the third team in school history to get to 10 wins. They made it a goal, and I'm proud of the way they fought. We're really excited to represent our school in the second round."

Fairview moved the ball into Eagle territory on its opening possession, but Center Point's Kemarius Horne scooped up a Martin fumble and returned it about 80 yards for a touchdown. The Eagles then converted a 2-point attempt to claim an early 8-0 lead.

The teams traded scores the rest of the first half.

The Eagles increased their lead to 22-13 following D'ontae Eatmon's 34-yard touchdown dash and Harold Holloman's subsequent 2-point conversion on the opening drive of the second half.

The Aggies, though, kept battling and making plays.

Martin's 6-yard touchdown jaunt and 2-point plunge brought the home squad back to within a point (22-21) late in the third quarter.

Fairview then came up with a defensive stop and used some razzle-dazzle to punctuate a 14-play, 80-yard drive that resulted in the Purple and Gold claiming their first lead of the matchup.

On a fourth-and-7 from the 19-yard line, Martin took the snap and handed the ball to Eli Speegle.

Speegle then gave it to Chamness on a reverse, and the latter hit a wide-open Martin down the sideline for the go-ahead touchdown.

"We've had quite a few wrinkles here and there, and we've been carrying that one for half the season. Man coverage, and we knew they'd chase the motion. Not a lot of people look for the quarterback coming out of the backfield," Redding said.

The Aggies forced a turnover on downs on Center Point's ensuing possession, and Tyler Simmons' sack in the waning seconds of the frame officially sealed the deal as the clock hit zero.

"Our defense played extremely well and eliminated explosive plays," Redding said. "I felt like we did a solid job up front and controlled the line of scrimmage and grinded them out."

Both Martin and Simmons eclipsed 100 rushing yards for Fairview.