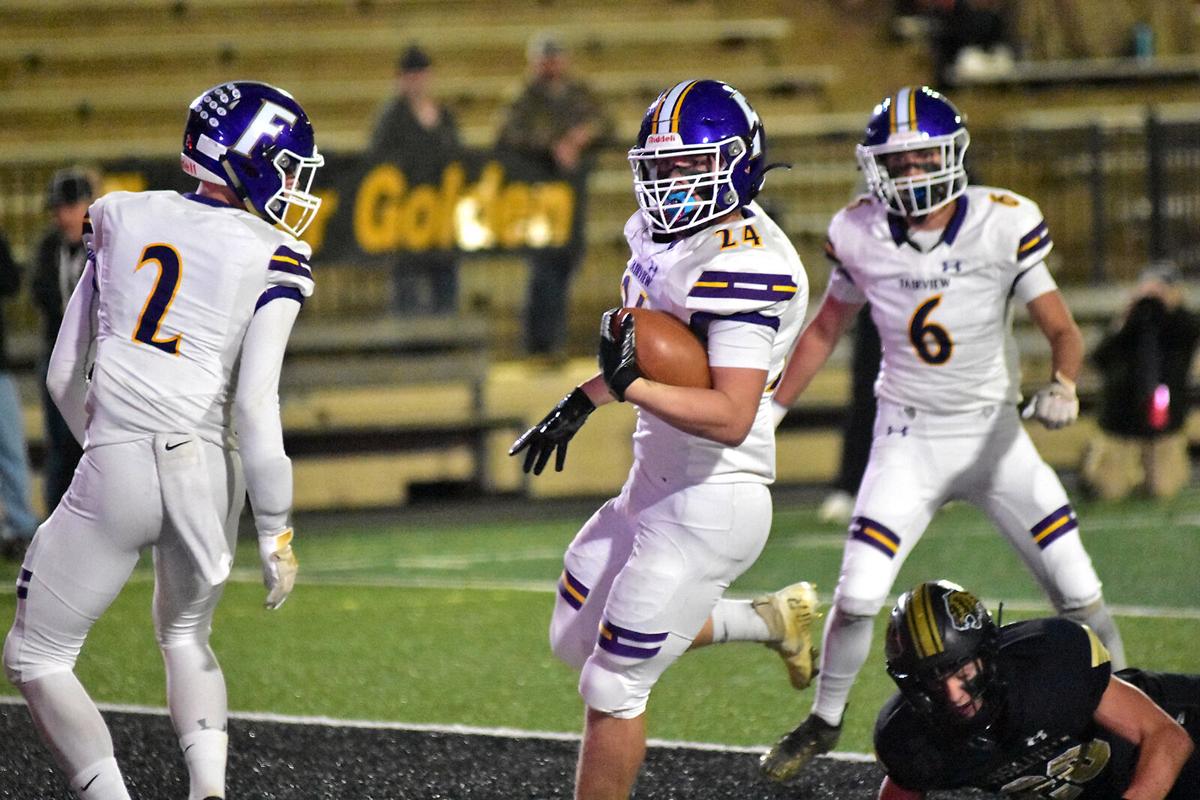 Fairview's Tyler Simmons runs in for a touchdown. 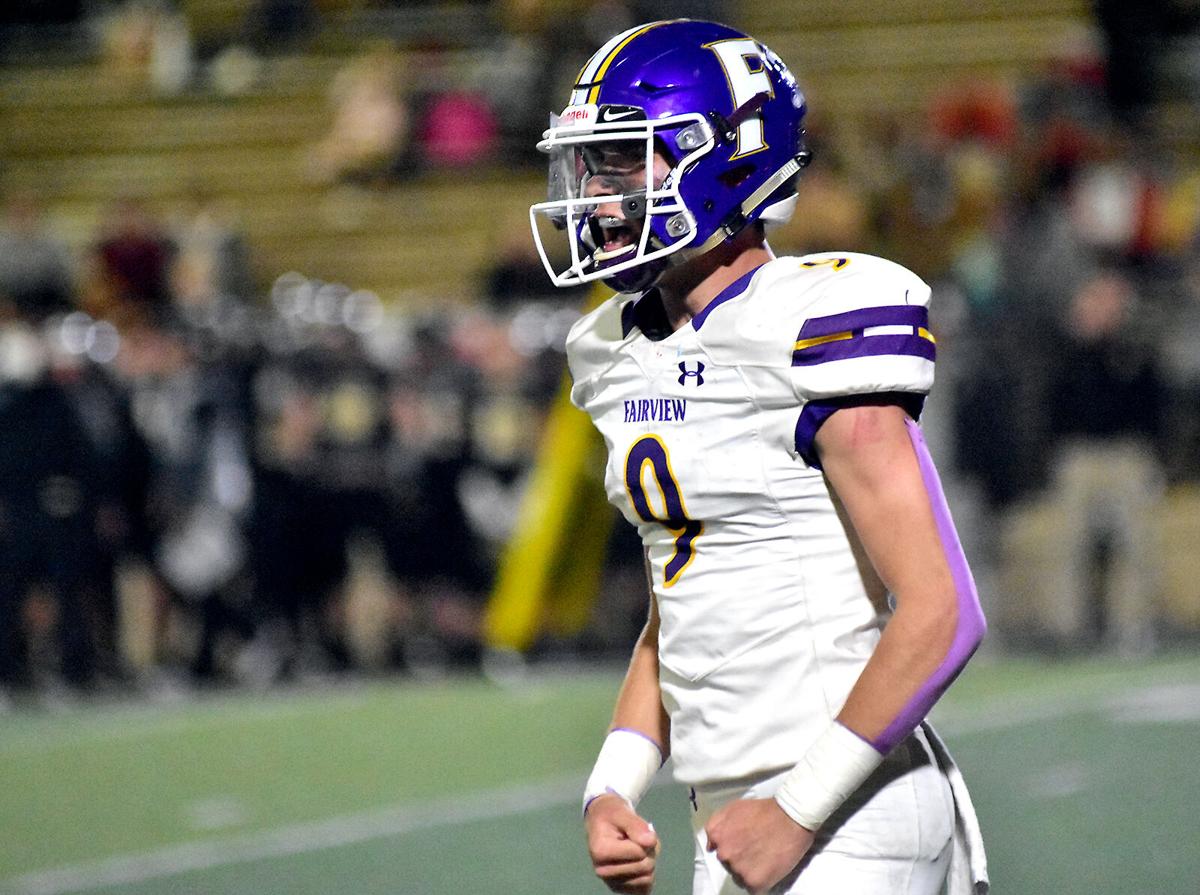 Fairview's Parker Martin celebrates at the end of the first half. 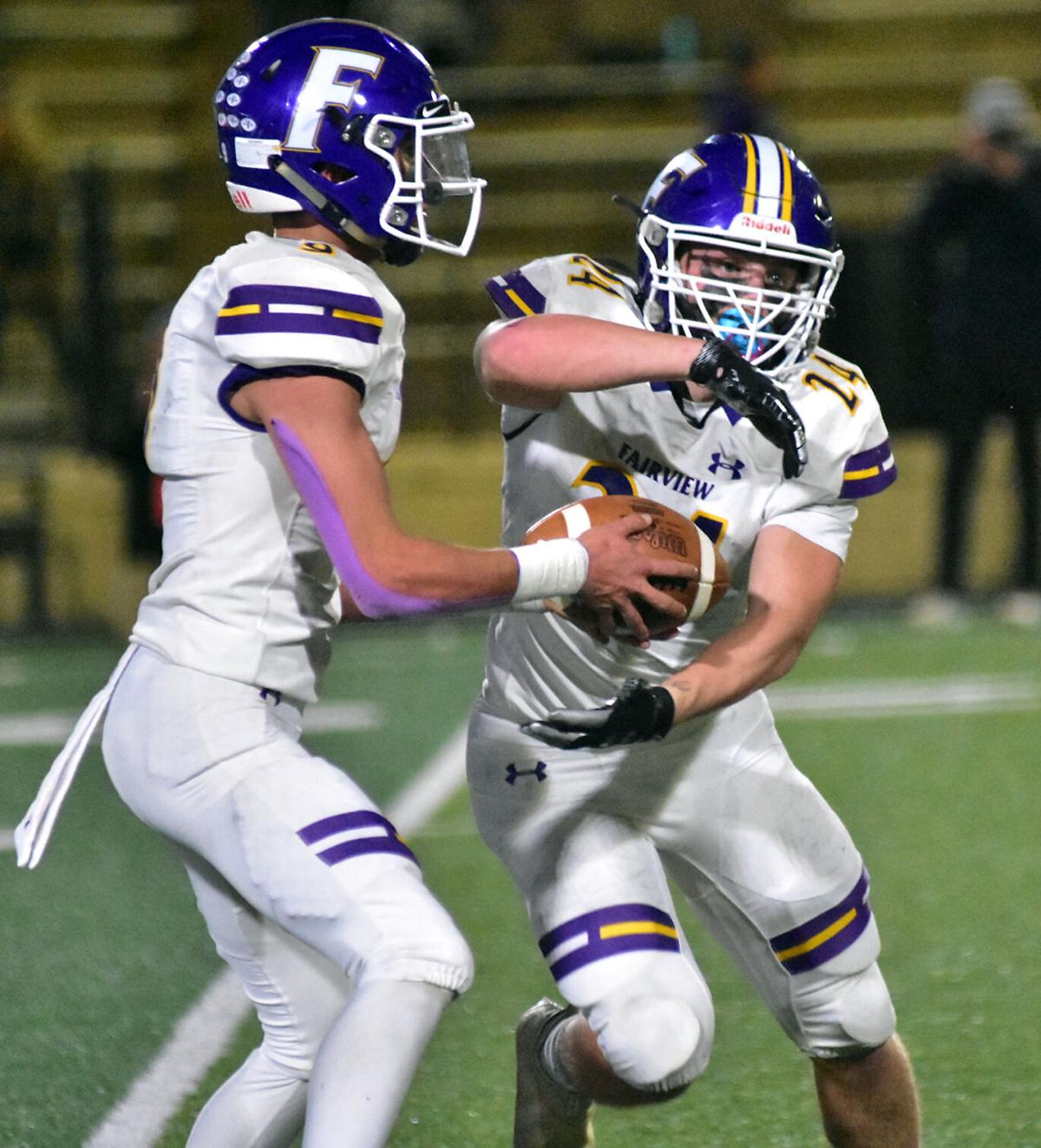 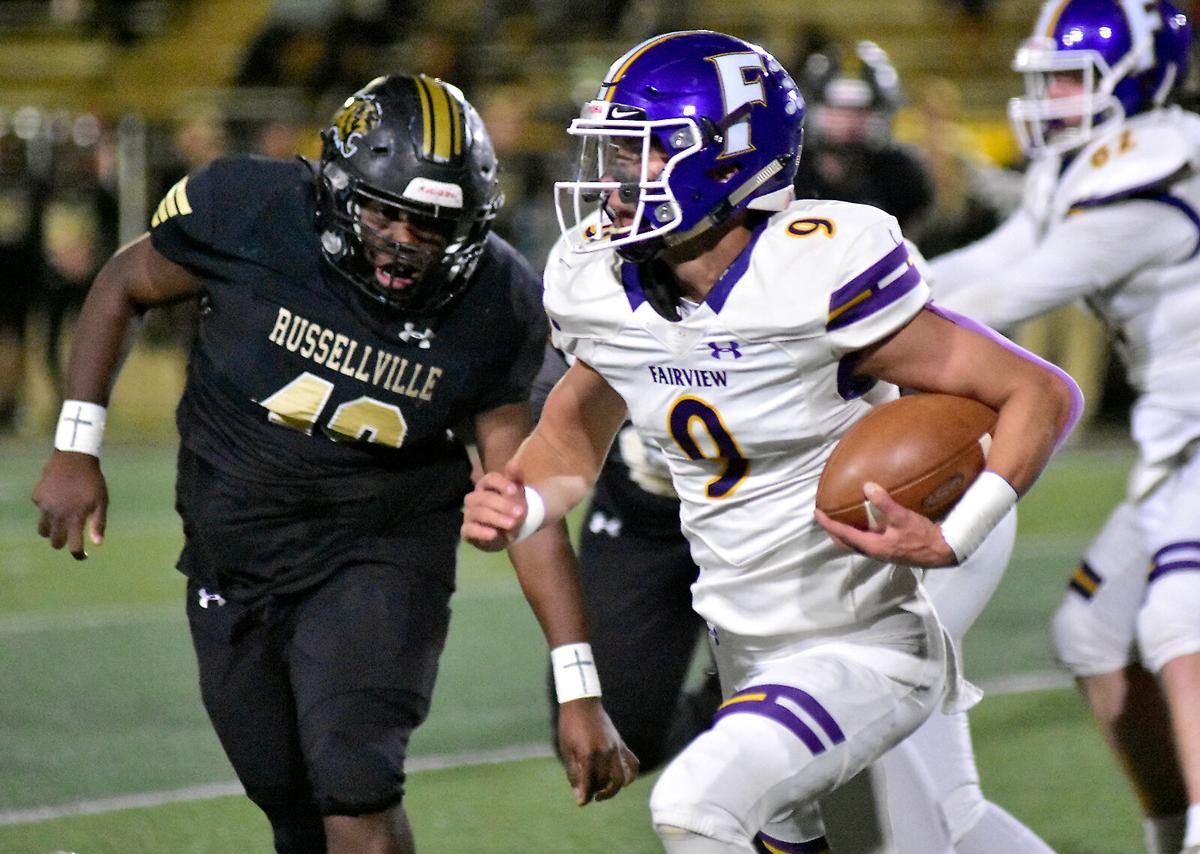 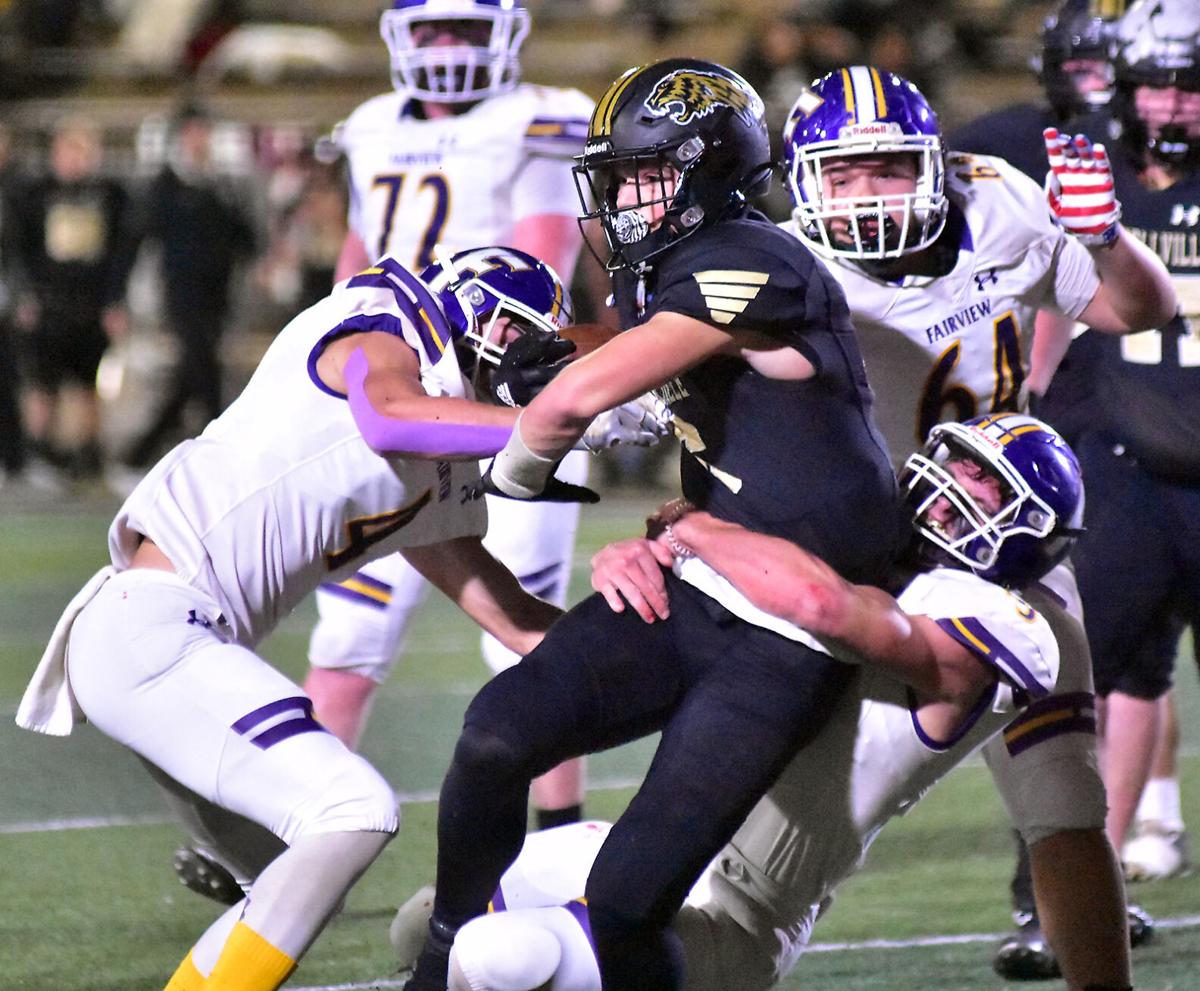 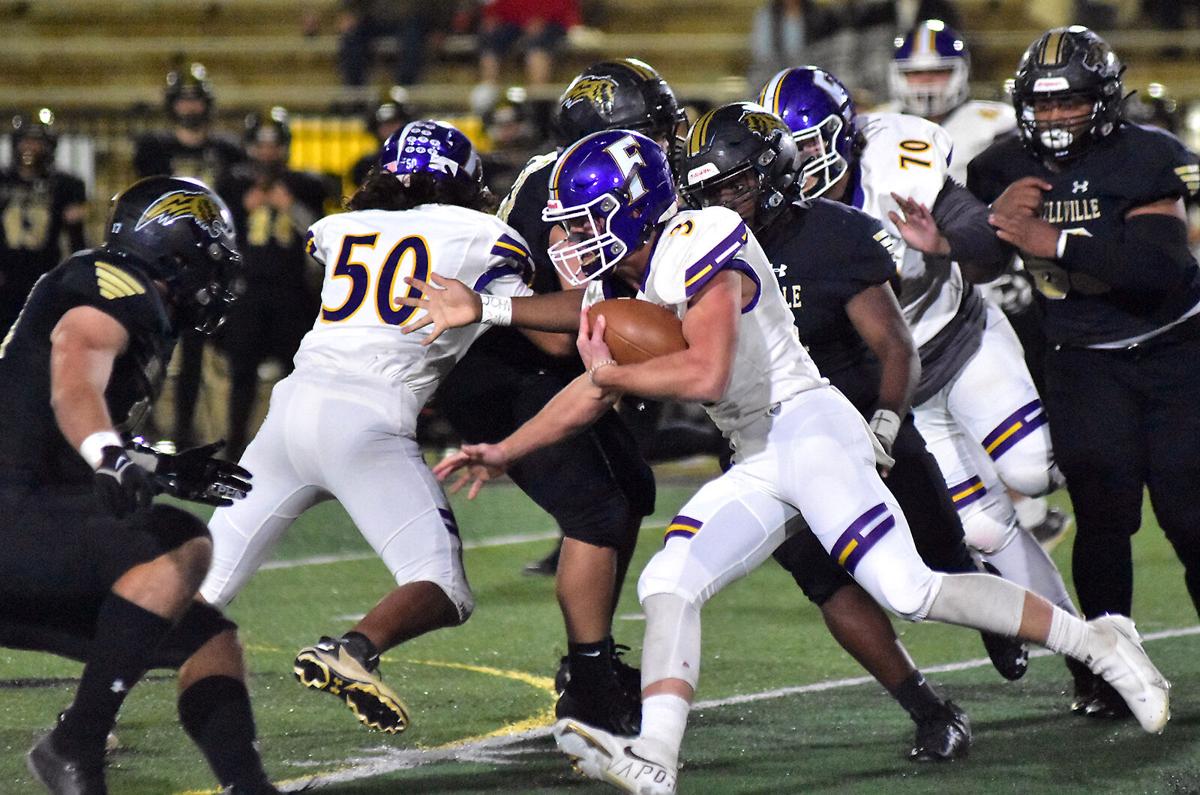 Fairview's Tyler Simmons runs in for a touchdown.

Fairview's Parker Martin celebrates at the end of the first half.

RUSSELLVILLE — Parker Martin accounted for four touchdowns, George Redding notched his 100th win as Fairview's head coach, and the Aggies powered past No. 9 Russellville 35-21 in the Class 5A playoffs on Friday night to reach the quarterfinals for the first time since 1994.

"These kids are willing to fight,” said Redding, who was a high school senior the last time the Aggies advanced to the quarterfinals. "Our community shows up every week to cheer our guys on, and they’ve never been to a game where these kids didn’t fight hard. We knew that’s what it was going to take tonight. We knew it was going to be a fight. You know, there’s an aura out there that we aren’t supposed to be here or make it this far. Well, someone forgot to tell these guys. This is what they want to do, and we’re going to keep doing it."

The Aggies marched down the field on their opening possession, capping a 10-play drive with Tyler Simmons’ 13-yard touchdown run to notch a quick 6-0 cushion.

The Golden Tigers (9-3) responded, though, scoring the next two touchdowns of the contest to claim a 14-6 advantage.

Fairview, however, had a chance to close the gap just before halftime, and the road team took full advantage of the opportunity.

Redding’s squad possessed the ball at the Russellville 7-yard line with less than 10 seconds remaining before intermission and elected to go for the touchdown. The ball was snapped over Martin’s head, but the senior signal-caller raced back to scoop it up and eluded a handful of Golden Tiger defenders — never once taking his eyes off his downfield targets — before zipping a ball to Simmons, who hauled it in to set off a huge celebration on the sideline.

The wild-and-crazy sequence punctuated a 16-play, 85-yard drive — one that saw the Aggies convert a trio of third-and-longs — and bestowed the Purple and Gold all the momentum going into the locker room, especially after Martin’s 2-point pass to Dalton Payne knotted the game at 14-14.

"I had the privilege to play for Dafford Smith,” Redding said. "He always said the good games, the tight games, were going to be determined by four or five plays. We talk about that every single day. Every play matters. Before we went out there for that play, Ethan Bice said, ‘Hey, we’re built for this.’ We try to put our guys in these situations … maybe not that one exactly (laughs) … but our guys did a great job of coming through.

“I’m just so proud of our kids and our coaching staff tonight."

After forcing Russellville to turn it over on downs to start the second half, the Aggies went right back to work on the offensive side of the ball, putting together yet another lengthy drive — 11 plays — and ultimately seizing a 21-14 lead on a 12-yard scoring pass from Martin to Jameson Goble on 4th-and-goal.

Fairview made it 28-14 early in the fourth quarter on a 1-yard plunge from Martin.

The Aggies snuffed out a fake punt to set up the scoring possession at midfield.

Russellville, however, fought back, scoring a quick touchdown to cut the deficit back to seven points (28-21).

But Martin and Co. were just too good on this night.

The former gashed the home team’s defense one last time, racing for a 38-yard touchdown with 2:16 left that all but sealed the deal.

When the Purple and Gold got one last defensive stop shortly afterward, all that was left to do was celebrate.

“It’s great to be here,” Simmons said. “This year, we said we were going to go further. I just want to thank everyone who came out to support us. I mean, look at this crowd — it’s crazy. I love our team. There’s too much to explain how much I love them.”

The Aggies are now just one of eight teams left standing in the 5A playoff picture.

Regardless of what happens between now and whenever their journey ends, the Purple and Gold will no doubt enjoy the ride.

“We’re in the business of trying to play at a high level but also represent our school and our colors at a high level,” Redding said. “We want to show up every Friday night and give it all we’ve got. We hope that our community is proud of what we’re doing and what we’re putting on the field."