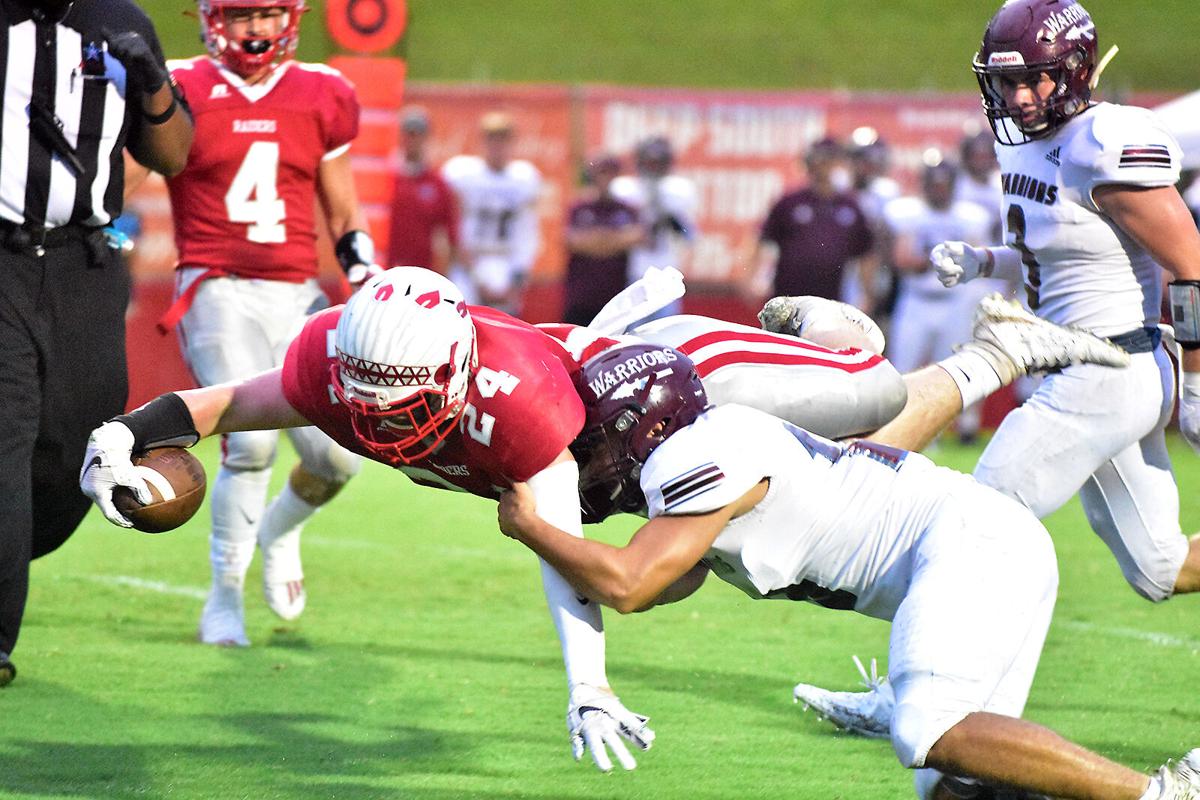 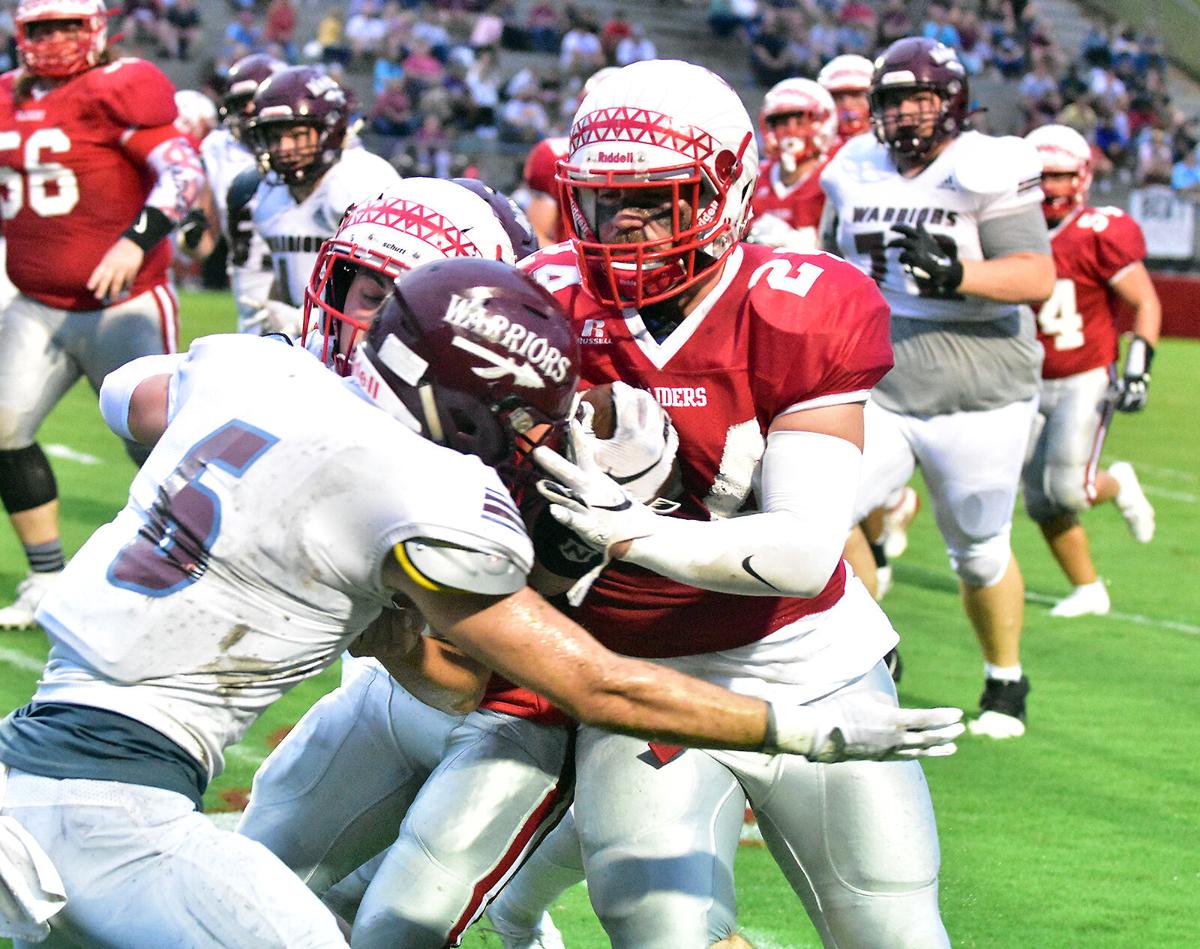 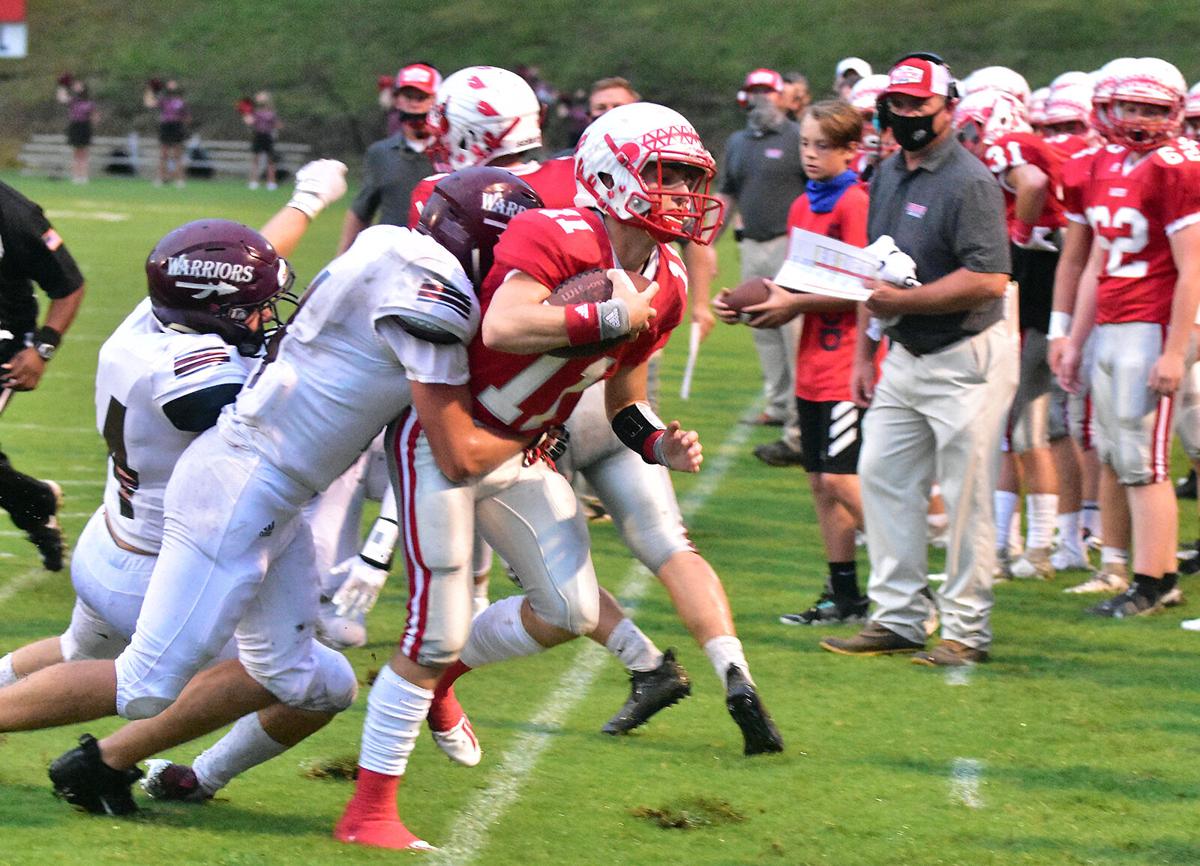 Good Hope's Tanner Malin is wrestled out of bounds. 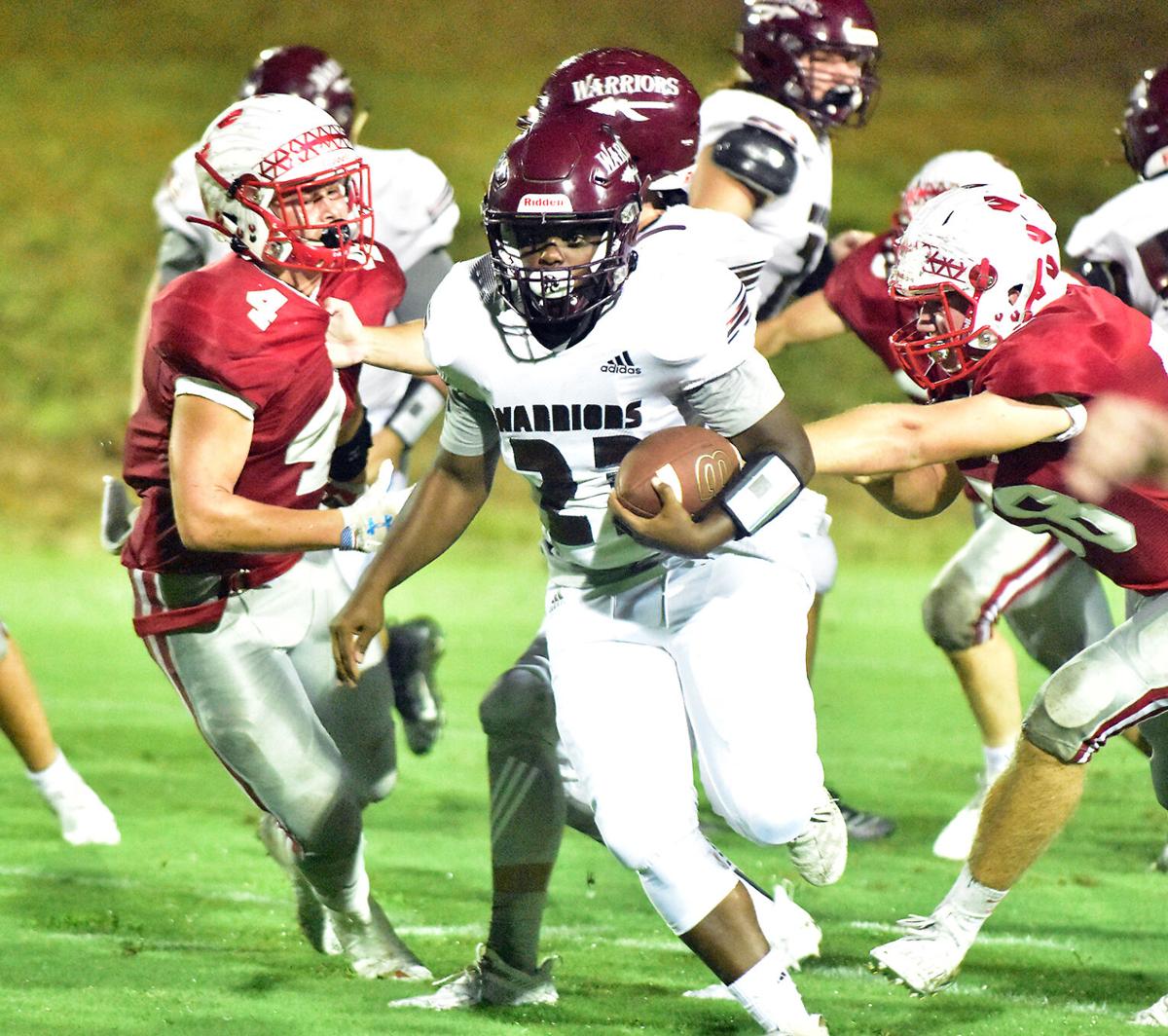 Good Hope's Tanner Malin is wrestled out of bounds.

The Raiders improved to 2-0 on the season following the home triumph, while the Warriors dropped to 0-1.

Good Hope coach Alan Scott was pleased with the win, even if it wasn't the most textbook of victories.

"One of my seniors told me on the sideline, 'Coach, that wasn't pretty, but we got it done,'" he said. "I think that probably sums it up. West Point has a great community and a great program. Coach (Don) Farley is a great coach. They're doing things well over there. We haven't played them in a couple of seasons, and the last two times we did; they just stomped us.

"I think for our guys it was a litmus test tonight to see where we stood. I felt like they stepped up."

After forcing a West Point punt, the Raiders scored a touchdown on their opening possession of the game — Bagwell found the end zone from 10 yards out — to seize an early 7-0 advantage.

West Point, though, answered on its ensuing possession with a 2-yard touchdown plunge from quarterback Will Cochran to bring the halftime score to 13-7. The TD was set up by Kelton Washington, who notched 52 yards on the ground (three carries) during the drive.

Both offenses continued to click coming out of the locker room.

The Raiders cashed in a 10-play drive with a 9-yard touchdown scamper from Malin to make it 19-7, but the Warriors punched back just four plays later on Cochran's 39-yard scoring run to cut the deficit to five (19-14) midway through the third frame.

It was all Good Hope from there.

The Raiders scored a touchdown — a 2-yard run from Bagwell — early in the final quarter, picked off a pair of passes — Ethan Anderson and Lawton Farr each nabbed one — and punctuated the victory with Malin's 13-yard touchdown dash with less than two minutes left in the contest.

Scott singled out the interceptions as key plays down the stretch.

"They did a great job of scheming us up during the game, but I felt like our coaching staff did a great job of getting our kids in the right spot," he said. "And our kids felt comfortable with what they were doing. It turns out they made a couple of big plays there in the fourth quarter, and I'm proud of them for that."

The Raiders relied on the senior running back time and time again to move the chains on Thursday.

"Nice might not be a strong enough word," Scott said with a laugh. "It's awesome. Colton has a great mentality. He never gets flustered, and he keeps pounding. He knows guys are going to hit him. He knows people are going to circle him to try to stop him. I want to give a lot of credit to our strength and conditioning coach (Patrick McDonald). He does a great job with our guys getting them ready for a game like this. It's a physical game. Our offensive line ... we're undersized a lot of times, but our kids have guts. And Tanner just makes us go at quarterback. And we've also got guys who can help take the load off him and Colton."

Anderson pitched in 44 yards on six carries, and Burns reeled in three catches for 32 yards.

Anderson, Eli Pugh and Paydon Bagwell also got involved in the passing game.

Cochran completed 6 of 14 passes for 80 yards. He registered 72 yards on eight carries as well.

West Point will look to bounce back at home next week against Lawrence County.

On Thursday, however, all Farley could do was compliment the home team.

"Hats off to Good Hope," he said. "They do an excellent job. 11 (Malin) and 24 (Bagwell) run their scheme very well. I didn't do a good job getting our guys ready. Too many mistakes. We have to put this behind us and move forward. We have a great opportunity to learn and get better."

The Raiders will head to Ashville next week for their region opener.

They'll do so undefeated, too, which is music to Scott's ears.

"It's awesome," he said. "Of all the years, we're taking this one game at a time. We're going to savor this one, and it's good to be a Raider."