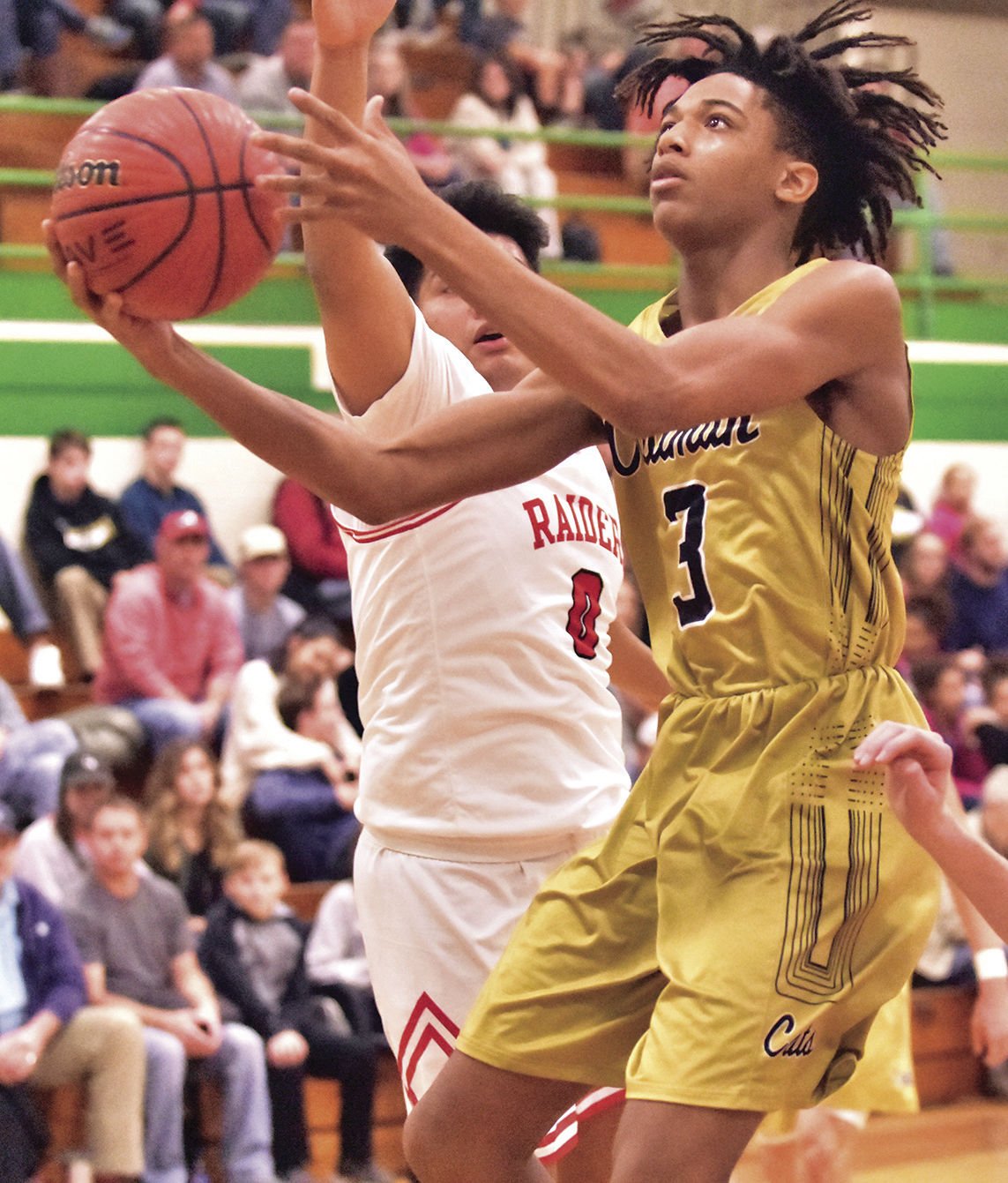 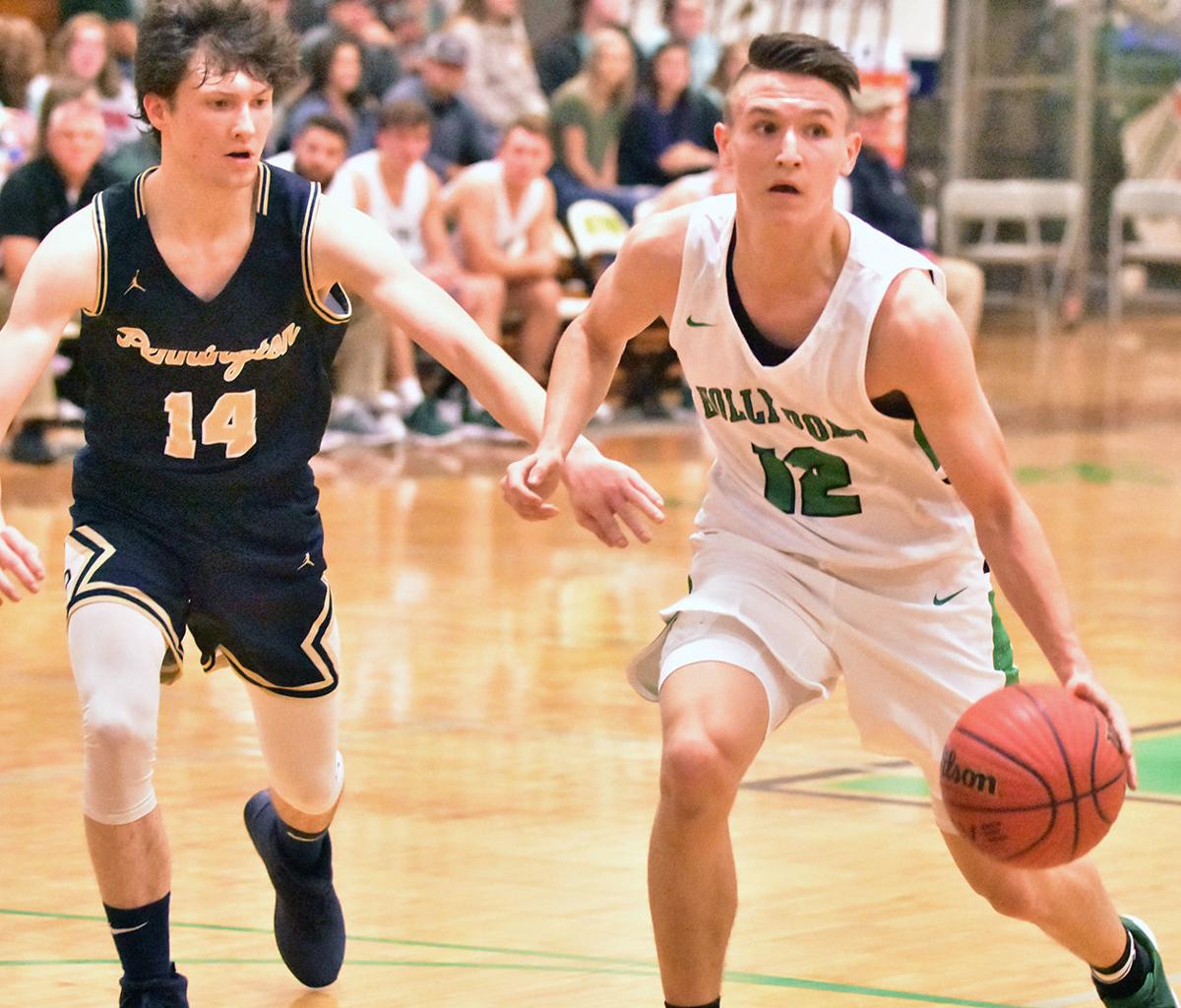 Holly Pond's Griffin Morris drives to the basket on Wednesday.

Holly Pond's Griffin Morris drives to the basket on Wednesday.

HOLLY POND – Cullman’s varsity boys used a dominant first half to build a commanding lead en route to a 67-41 win against Good Hope at the 61st annual Holly Pond Thanksgiving Tournament on Wednesday.

The Bearcats closed the first quarter strong and outscored the Raiders 20-8 in the second frame to take a 36-17 advantage into halftime. Coach Bobby Meyer’s squad forced numerous turnovers with its stout defense and parlayed them into transition baskets on the other end of the court.

Drew Morton, Dylan Finch and Noah Bussman earned 12 points apiece, while Zane Manley (nine), Nick Williams (eight) and Trey Tucker (six) also got in on the action for the Black and Gold (3-3).

“Good Hope gave us a ton of effort, but I think our depth got to them a little bit,” Meyer said. “We really haven’t had a lot of practice time on the floor, so we’re trying to get better at being us. We’ve had a few breakdowns defensively, and we’re working on it offensively. This game was good for us.”

Kyler Chaney was next in line with 12 points, while Jake Harris, Cooper Jones and McKinley Garrett each had nine.

The two teams were tied after the first frame, but Holly Pond led by 15 points at halftime and 26 points at the end of the third quarter.

% Hanceville 72, Tarrant 53: The Bulldogs strolled past the Wildcats on Wednesday night and straight into the championship game of the 35th annual Hanceville Thanksgiving Tournament.

The Purple and Gold moved to 2-2 this season with the win. Stats were unavailable.

% Curry 49, Cold Springs 36: The Eagles fell to 1-3 this season following Wednesday’s loss against the Yellow Jackets.

Dylan Byrd racked up eight points for Cold Springs, while Mason Harris and Hunter McClendon came up with six apiece.

West Point lost to Brewer 59-49 on Wednesday night to fall to 1-3 this season.

The Warriors dropped Tuesday night’s tilt against Priceville 64-58 in overtime.

% West Point 80, Phil Campbell 66: The Lady Warriors wrapped up a perfect week with a tremendous victory against the Lady Bobcats on Wednesday night.

Though the Maroon and White collected a 4-0 record in their tournament, Florence did the same and ultimately took home the title by allowing fewer overall points than coach Richie Penn’s squad.

% West Point 81, West Morgan 60: The Lady Warriors had no trouble scoring in Wednesday's opener against the Lady Rebels.

% West Morgan 47, Cold Springs 43: Despite 21 points from Camryn Crider and 14 points from Toni West, the Lady Eagles couldn’t get over the hump in Wednesday night’s loss.

Cold Springs, which wrapped up the tournament 2-2 overall, is now 3-3 this season.

Neely Ellison and Aubrey Negron rounded out the scoring with six and two points, respectively.

Cold Springs took home the team title as well by winning the tiebreaker over West Point.

% Colbert County 69, Cullman 67: Olivia Neal’s 3-pointer gave the Lady Bearcats a one-point lead with 25 seconds remaining, but the Lady Indians came up with the plays down the stretch to deny the Black and Gold their sixth win of the season on Wednesday night.

Malia Howell, meanwhile, was the top scorer for the Lady Bulldogs with 10 points.

% Hanceville 51, Good Hope 39: The Purple and Gold wrapped up their tournament outing with an impressive showing against the Lady Raiders on Wednesday.

The Lady Raiders lost to Colbert County earlier in the day. Stats from the contest were unavailable.

% Hanceville 59, Russellville 52: Kelly Pickett balled out for 32 points to lead the Lady Bulldogs to a fine triumph on Tuesday night.

% Holly Pond 53, Sacred Heart 49: The Lady Broncos held on for their first triumph of the season on Wednesday night.

Maddie Heatherly was key for Holly Pond, netting a team-high 18 points. Kolby Holcombe (nine) and Kirsten Campbell (eight) came up large as well, while six other players had at least two points.

William James Welsh, age 98, of Cullman, passed away on Saturday, January 15, 2022, at Summerford Nursing Home. He was born August 18, 1923, in Jersey City, New Jersey, to Edward I. and Eleanor Welsh. Mr. Welsh proudly served in the U.S. Army as part of the 94th Infantry Division for four ye…