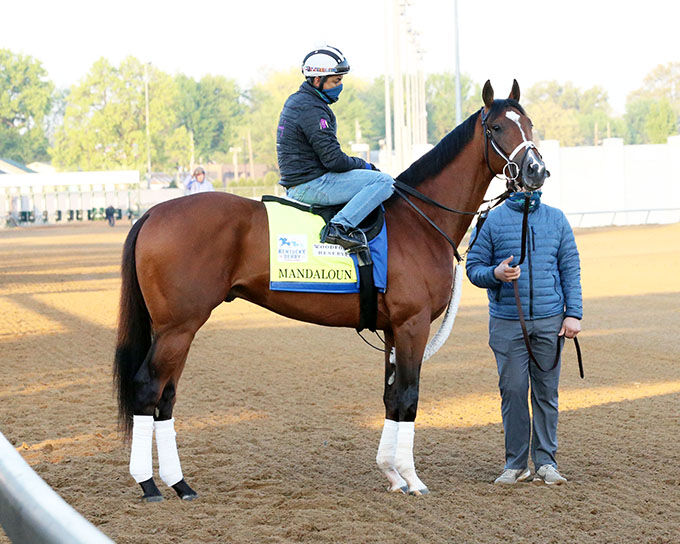 Mandaloun, which is trained by Brad Cox, has 15-1 odds in Saturday's 147th running of the Kentucky Derby. 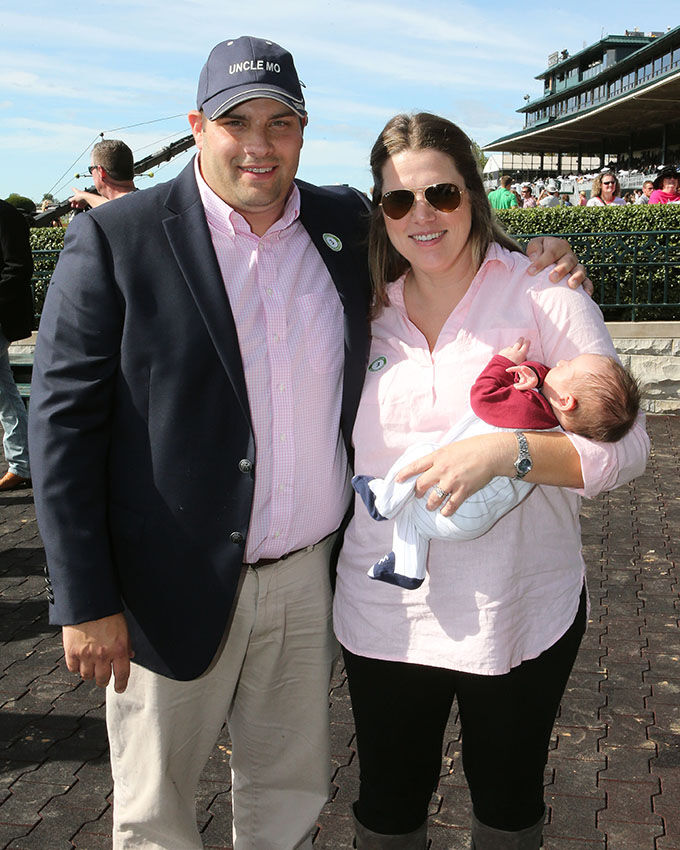 Brad Cox, pictured here with his wife Livia and son Brodie, will try to become the first trainer from Louisville to win the Kentucky Derby on Saturday.

LOUISVILLE — The Kentucky Derby is full of interesting facts and statistics.

One of those that seems almost unbelievable is that in 146 years a trainer from Louisville, the Derby City, has never won the Run for the Roses.

Brad Cox is hoping to snap that Louisville losing streak with his first appearance in the race — and he’ll get two tries at it. Cox, 41, will send out 2-1 morning-line favorite, Essential Quality, as well as 15-1 Mandaloun in Saturday’s 147th Kentucky Derby.

Cox, who grew up two blocks from Churchill Downs, began his training career in 2004 but didn’t get his first win in a Grade 1 stakes race until 14 years later. In 2018 Monomoy Girl won Keeneland’s Ashland Stakes in preparation for the Kentucky Oaks, which she won a month later.

In the three years since then, Cox not only won another Kentucky Oaks (with Shedaresthedevil in 2020) and seven Breeders’ Cup races, including last year’s Breeders’ Cup Juvenile with Essential Quality. He's also the reigning Eclipse Champion trainer. These are feats that may take a trainer a lifetime to accomplish, yet Cox did it in the span of three years.

“We’ve been very fortunate to win two Kentucky Oaks, seven Breeders’ Cup races and an Eclipse Award — and those are things that I’ll never forget and am very proud of those — but Kentucky Derby is number one," Cox said. "I’m not bashful about saying it. We have a lot of goals. It’s not just the Kentucky Derby, but that is number one and it would mean a lot. So it would be a great accomplishment, to say the least.”

But the Kentucky Derby isn’t a race you choose, it’s one you earn. The race is restricted to 3-year-olds and is limited to 20 horses that have earned the most points on the Kentucky Derby leaderboard by finishing within the top four in selected prep races.

“The one thing is good horses, for sure, but there are several things that put us in this position," Cox said. "(One is) clientele, we have great clientele. (Another thing is) great help, great assistant trainers. So, I have a lot of help and we got the right people in the right place. We're very blessed to have great clientele supporting us with great bloodstock.”

Essential Quality is undefeated in five career starts. In addition to the Breeders’ Cup Juvenile, he counts the Southwest Stakes and Blue Grass Stakes among his victories. Owned and bred by Godolphin Racing, LLC, the Tapit colt broke his maiden at Churchill Downs on the Kentucky Derby undercard last year.

Cox also counts the Juddmonte homebred Mandaloun on his list of Derby starters. He may not have the unblemished record of Essential Quality, but the son of Into Mischief has only lost two races in five starts, with last being a sixth-place finish in the Louisiana Derby.

“I’m not so sure he doesn’t have a photographic memory,” Jimmy Bell, President of Godolphin USA, said of Cox. “He is so quick with what his horses are doing, what other horses are doing, other races, who’s winning, what kind of racing styles they have, how that compares with his own, so he's always very well-prepared and very knowledgeable. I think he really knows where to place his horses, from the very good ones to the ones falling under expectations. He’s completely absorbed with it.”

Cox’s talent is not only acknowledged by his owners, but his competition is also taking notice.

“I think when you get to that level more people recognize you, and the expectations increase,” two-time Derby-winning trainer Todd Pletcher said. “So that’s ultimately the position that you’re hoping to get to as a trainer and Brad has done a terrific job of building a really, really strong stable. And he’s doing all the right things with it.”

Pletcher’s four horses (Known Agenda, Sainthood, Dynamic One and Bourbonic) will be among the 18 horses trying to prevent Cox from capturing lightning in a bottle in his first go at the most prestigious and most sought after race for any trainer, Louisville native or not.