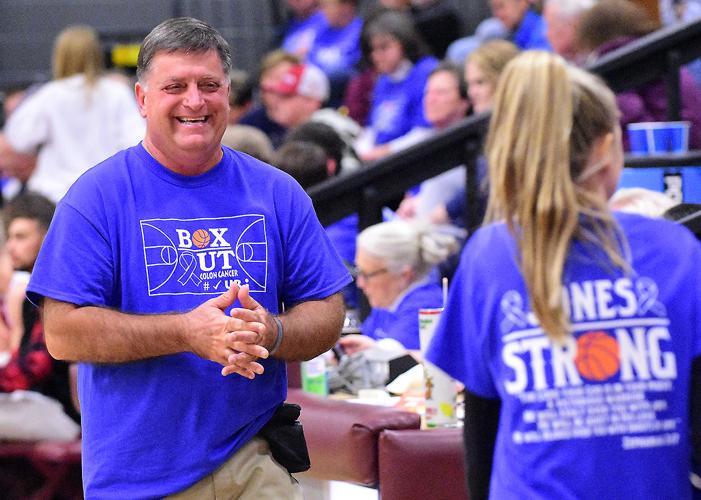 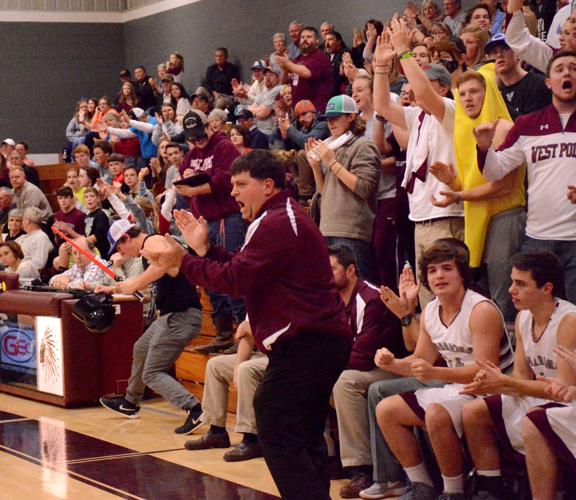 Coach Randy Jones and the West Point bench and student section get pumped as the Warriors close in on a win during the 2015-16 season.

Coach Randy Jones and the West Point bench and student section get pumped as the Warriors close in on a win during the 2015-16 season.

No one exuded what it means to be a Warrior quite like Randy Jones did.

Be it his courageous battle against a 2019 cancer diagnosis or the respected manner in which he competed during his 10-season tenure as West Point’s varsity boys basketball coach, Jones gave it everything he had in a way that made the Maroon and White community — one that loved him through and through — remarkably proud.

Jones died Sunday at age 54, and that aforementioned community he served admirably for so many years is now mourning a loss that came far too soon.

“He’s going to be greatly missed,” said Heith Yearwood, who coached with Jones before becoming the principal at West Point and, later, headmaster at Cullman Christian. “Randy and I go a long way back. We played sports together, and I have a lot of fond memories. We also coached against each other and with each other. He was one of the smartest guys you could ever know and a valuable assistant.

“West Point always meant something to him, and it’s a tough loss because he meant so much to West Point. He was tied into it in so many aspects — his family, coaching, teaching — and the kids learned so much about life outside of basketball.”

Yearwood recounted Jones’ initial bout with cancer and how, despite his condition, Jones wanted to return both to the bench and the classroom.

“He came back that last season, and he really shouldn’t have,” Yearwood said. “I think the kids really learned about his commitment and respected that. From the stories I heard, he gave it everything he had and was wiped out afterward. He just loved being around the kids. That’s what he missed the most when he did miss time. Up until this year, even, he was teaching.”

Jones won a county title (2012) and an area championship (2015) during his tenure with the Warriors, which also included a trio of county and area runner-up finishes. He was able to coach his two sons, Ryder and Rylan, and also shared coaching duties at West Point with his wife, Regina, a longtime basketball and volleyball leader for the Warriors who coached their daughter, Ryleigh, on the volleyball court.

When Jones stepped down in 2021 due to his illness, he wasted little time assigning credit where he felt it was due.

“A coach doesn’t accomplish anything without great players,” he told The Times in a phone interview. “And I had a lot of them. I just hope people say about my kids that they played hard and gave it all they had, whether as a favorite or an underdog. My goal was that my kids gave it everything on the floor.”

Mason Voce, meanwhile, saw Jones’ style of coaching up close, both as a player (2010-13) and assistant (2019-21) before taking over following his departure.

In both instances, Voce recalled his former coach “instilling grit” in his teams.

“As a player, we understood what was expected,” he said. “You were going to work hard and practice hard, or you weren’t going to play. You had to be tough, mentally and physically. My first year as an assistant was when he got his initial diagnosis. And he was sick. But he never missed a practice or a game. I had the utmost respect for him. He always told the kids that bad things are going to happen and to just fight the fight and control what you can control. Everything he told us about adversity … he was that person. He never wavered from who he was — a positive, people-loving person.

“He was also so stinking smart. We’d go scout teams and I would take notes, and he’d ask me what I was doing. I’d be like, ‘Coach, I’m taking notes.’ And he’d just point to his head and say, ‘It’s all right here.’ It was an honor to play for him and coach beside him. Everyone who came into contact with coach Jones is a better man for it.”

“Without him, I would not be serving in the position I have today,” said Boyd, who shared a bench with Jones from 2014-18. “I was blessed to be with him for four years. He taught me what it took to run a program. His generosity gave me an opportunity to get closer back to home, and I’ll forever be grateful for our friendship.”

Boyd’s respect for Jones extended far beyond the court, too.

“He was a great man who gave everything he had for the people around him,” he said. “The relationship he had with Jesus was a true living testimony. Randy knew his strength came from God and never ceased to give Him the glory. His life was lived to serve God, and his testimony is a light to all of us.”

Those who grew accustomed to seeing Jones at the head of the bench also became familiar with Scott Brown, who served as Jones’ varsity assistant and junior varsity coach for eight seasons. The recognizable tandem also assisted Yearwood for eight seasons prior to Jones’ tenure and even shared a couple of years together coaching middle school football.

While Brown recalls many moments shared on the court, it was Jones’ influence on the kids that stood out most to him.

“As a coach, he expected you to do it right … and he gave you the opportunities to learn to do it right,” Brown said. “But he used the game as a platform to teach you to do things right in your life. I watched him mold young men to be good husbands and good fathers. Not only did he try to teach them, he lived as an example of that with his family.

“I’ve had a lot of memories running through my head, and I had a chance to visit Randy a couple of weeks ago. We talked, and I shared with him the impact both he and Regina have made on peoples’ lives. A few years ago, we had a gentleman that had hired a man who had played basketball for us. He said one of the main reasons he hired him was because of his work ethic. I knew that Randy had helped instill that work ethic not only in him, but in so many others who came before him.”

For Don Farley, his friendship with Jones — one that stretches through many, many years — is something he’ll always cherish.

“He was a guy who cared about his kids, his players, and the coaches he worked with,” he said. “Our friendship was deeper than just sports, too. He was always kind of like a mentor for me. We were able to confide in each other and work through some issues in all walks of life. Sometimes, it’s good to have a person who understands what you’re going through. And Randy was always there for me. We spent a lot of time together, and we kind of always joked and felt like we had the world’s problems fixed if people would just listen to us (laughs). ”

Jones served on staff several seasons for the longtime football coach, and Farley couldn’t be more appreciative of his efforts.

“He was the guy in my ear in the press box,” he said. “Even after he wasn’t there due to his illness, he would still watch film on Hudl and offer up advice and tell me things he saw. And he always did it in a positive and influential way. He was always lifting us up, always telling us what a good job we were doing no matter what the record was.

“In addition to that, he was first-rate in the classroom. As a coach or a person or a Christian, he was unbelievable. You always knew what you were going to get with Randy. He always worked hard and was so dedicated to what he was doing. It didn’t matter if it was helping a student with a math test or working in the hay field — he was always, always, always giving it the same drive and commitment. He's going to missed."