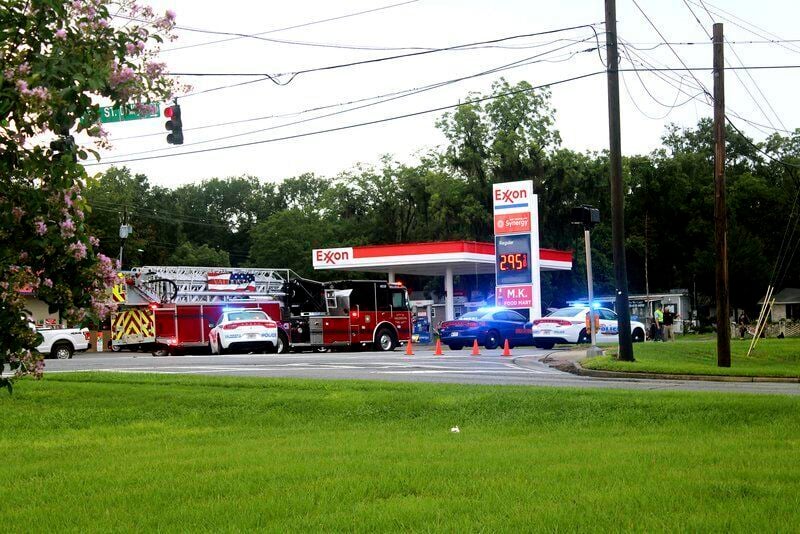 Terry Richards | The Valdosta Daily TimesLaw enforcement cars block off the intersection of the Madison Highway and Dampier Street in Valdosta Monday following an accident which injured three firefighters and a police officer. 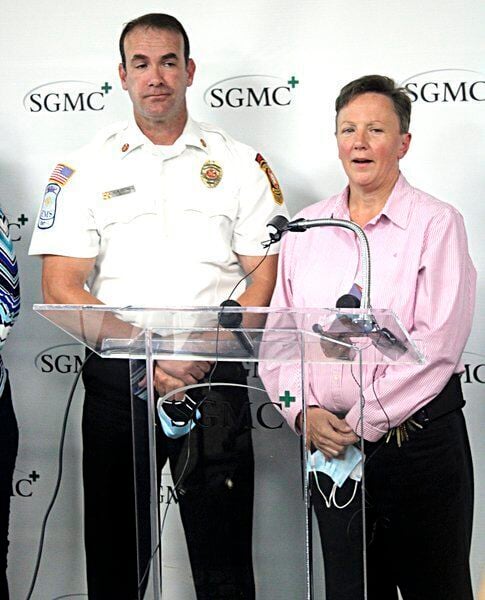 Terry Richards | The Valdosta Daily TimesLaw enforcement cars block off the intersection of the Madison Highway and Dampier Street in Valdosta Monday following an accident which injured three firefighters and a police officer.

VALDOSTA — Two firefighters and a police officer remained in the hospital Tuesday after an accident involving a downed power line Monday, officials said.

Monday, police and firefighters responded to a call about a power line down on Madison Highway near the intersection with Dampier Street. The accident took place after a heavy thunderstorm had moved through the city.

“We had vehicles that were being directed to drive through the area,” Manahan said. “Unfortunately, as they were driving through, a semi picked up one of the wires and pulled it, and when they pulled it, the power pole broke, which caused the power pole to break in half and shoot across the road.”

A police officer and three firefighters were struck by the power pole and were injured on the scene, she said.

“This is extremely unexpected,” Manahan said.

The firefighters and police officer were taken to SGMC for treatment, Boutwell said. One firefighter was released from the hospital Monday night, he said.

On the scene, the police officer was walking around, “dazed and confused,” with facial injuries and was taken by squad car to the hospital, Manahan said.

One firefighter suffered a below-the-knee amputation on the scene, while the other firefighter is being observed for injuries, Boutwell said.

The names of the injured are not being released at this time for the families’ sake, Manahan said.

“We’ve run thousands of calls of lines down, especially those that are storm-related,” Boutwell said., “and all personnel operated on the scene just as we always did, following protocol … It was just a tragic event that occurred unforeseen.”

Both chiefs said they had never had to deal with a tragedy like this before.

“In many years in public safety we’ve responded together to tragic events, but this is the worst,” Boutwell said.

They also praised the community spirit and prayers that have been dedicated toward the injured.

Mayor Matheson said a donation fund for the four injured city employees has been started at Guardian Bank in Valdosta.

One of the firefighters has worked with the department for 11 years, another for 16 and the third for one year, while the police officer had been on the force for two years, said Ashlyn Johnson, public information officer for the city.

Terry Richards is senior reporter at The Valdosta Daily Times.