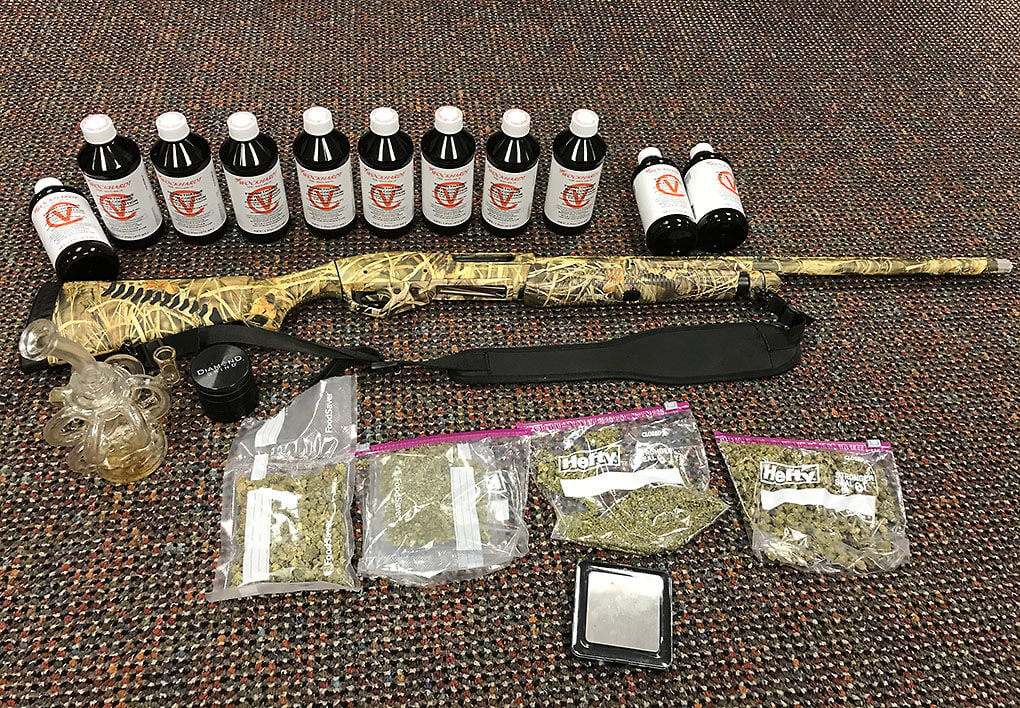 Deputies located eight pints of promethazine with codeine, approximately three ounces of marijuana, a 12 gauge shotgun and other drug paraphernalia while serving a warrant on Dustin Tuff McGraw.

Deputies located eight pints of promethazine with codeine, approximately three ounces of marijuana, a 12 gauge shotgun and other drug paraphernalia while serving a warrant on Dustin Tuff McGraw.

GARDEN CITY — A suspect in a home invasion is being treated for gunshot wounds after exchanging gun fire with the home owner, the Cullman County Sheriff's Office reported.

According to the CCSO, residents of a Garden City home woke in the early morning hours of Monday, Aug. 17 to find four suspects breaking in.

One suspect, who has not been identified, was shot during an exchange of gunfire and is now being treated in a regional hospital. Charges are pending on the suspect.

Dustin Tuff McGraw, 21, of Vinemont fled the scene, but was later arrested around noon Monday, Aug. 17 near Trimble by the CCSO Special Response Team, CCSO deputies and investigators. While executing a warrant on McGraw, deputies located eight pints of promethazine with codeine, approximately three ounces of marijuana, a 12 gauge shotgun and other drug paraphernalia.

All three suspects are being held at the Cullman County Detention Center without bond.

“This is a great example of citizens utilizing their second amendment rights and protecting themselves and their family. I have often stated that law enforcement can be minutes away when you only have seconds to defend yourself and your family. That’s why we at the sheriff’s office are proponents of not only having a weapon for self defense but also being proficient in how to use it,” said Sheriff Matt Gentry.