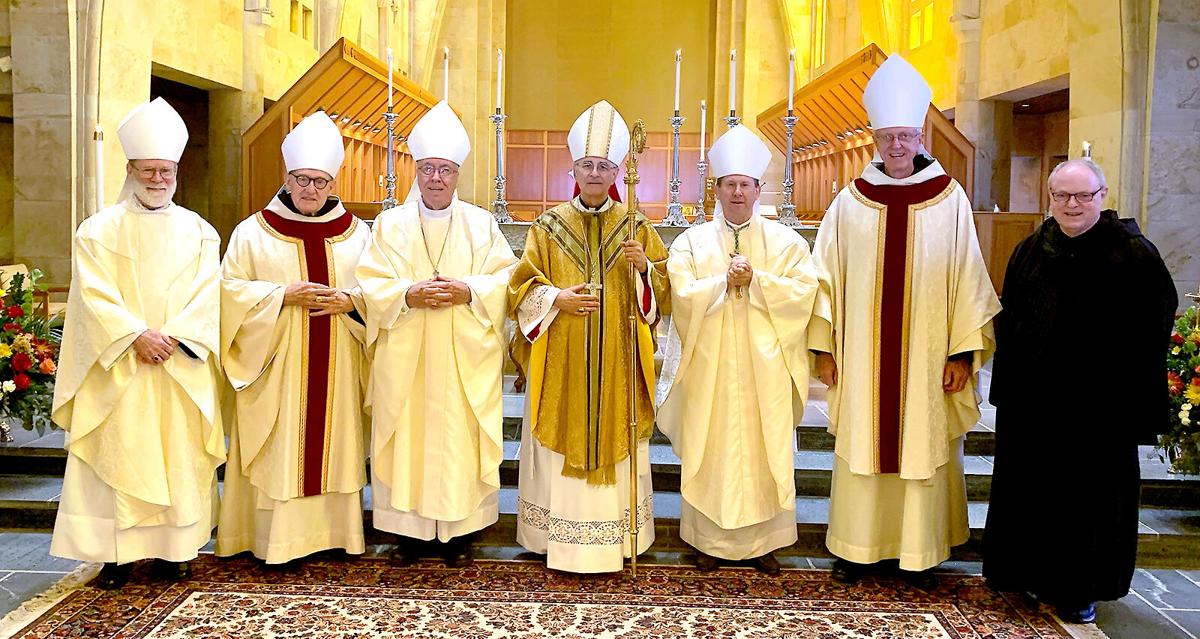 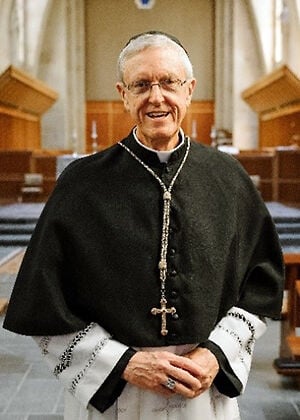 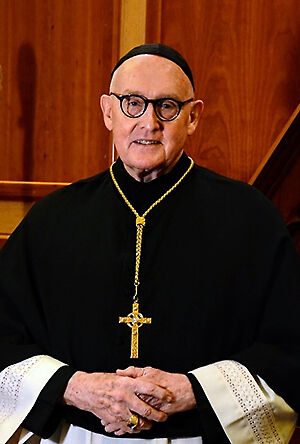 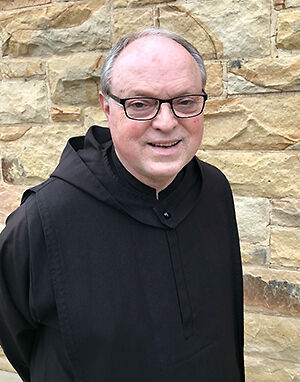 The monks of St. Bernard Abbey recently joined with clergy, friends and family to celebrate the 50th Anniversary of three of their members. In 1971 Br. Charles Manning, O.S.B., made his vows as a Benedictine and also that year Abbot (ret) Cletus Meagher, O.S.B., and Abbot Marcus Voss, O.S.B., were ordained to the priesthood. It was a joyous occasion that brought people to St. Bernard from as far away as California to celebrate with the honorees. Concelebrants included Bishop J. Mark Spalding of Nashville, TN, Bishop (ret) Robert Baker of Birmingham, and Bishop Steven J. Raica of Birmingham, who was the main celebrant and delivered the homily. Also included in the concelebrants was Abbot Placid Solari, O.S.B, of Belmont Abbey, NC.

In his homily Bishop Steven J. Raica emphasized three aspects of the lives of the jubilarians: thanksgiving for all that God has done, renewal in the on-going work of God’s Spirit and joy that comes with the Lord’s presence in our lives. Bishop Raica commended the monks on their 150 years of combined service stating there will still be many surprises ahead. He concluded by saying, “We are thankful for your response to God’s call and your vibrant steadfast witness of faith. May we walk together sowing seeds of hope and love as we fulfil our respective calling from the Lord himself.”

After the ceremony, a reception was held outdoors on the campus Quad and was catered by IZ Catering of Birmingham.

Music for the occasion was provided by the St. Bernard Choir under the direction of Mrs. Ashley Russell. Rebecca Whited served as organist.

Altar Servers were from St. Bernard Prep School’s Knights of the Altar.

Born and raised in Cullman the son of Joe and Catherine Voss. Attended St. Bernard Prep School 1957-60 and graduated from Cullman High School in 1961. Enrolled at St. Bernard College 1961-66 graduating summa cum laude with a BA degree in Philosophy and a minor in Business Administration. Earned a Masters of Divinity from St. Louis University in 1970 and a Masters in Spirituality from Creighton University in 1981. Ordained to the priesthood 1971 and from 1971-2019 served in the weekend ministry throughout Alabama. Was the Abbey Choir Master 1971-1991 and published a four-volume “Book of Hours” for use in the monastic choir. Has been a member of the Senior Council since 1971. Appointed Sub-Prior 1977-82. Served as registrar of St. Bernard College/Southern Benedictine College 1970-78 and was Campus Minister in 1979. Appointed Director of the Abbey Formation Program 1979-86 and also served as the Business manager of St. Bernard Abbey 1995-2008. Has served as a Visitator for the American Cassinese Congregation since 1988. Assigned as the Headmaster of St. Bernard Prep School 1986-92, President 1992-2011 and Development Director 1992-2019. In 2019 elected the 10th Abbot of St. Bernard Abbey.

The fifth of six children of Oscar A. and Mildred (Sommers) Meagher born November 15, 1944 in Cleveland, Tennessee. Primary school education was under the tutelage of the Nashville Dominicans at Notre Dame Grammar School in Chattanooga, TN. In 1958 entered St. Bernard Preparatory Seminary and graduated in 1962 –last graduation class of St. Bernard Prep until re-establishment in 1984; continued seminary studies at St. Bernard College Seminary 1962-1964; entered St. Bernard Abbey in 1964 as novice and professed vows in 1965; resumed college studies, graduating in 1967 with a Bachelor of Arts in Philosophy and minors in Psychology and English. Completed theological studies with a Masters of Divinity from St. Louis University in 1971 and ordained Priest in May of that same year.

As a monk, served the monastic community in various capacities, viz. Sub prior, Prior, Novice Master / Formation Director, Procurator (treasurer) and member, of the Senior Council. In ministries of St. Bernard, taught theology at St. Bernard College / Southern Benedictine College 1971-1979, served as chaplain at Sacred Heart Monastery, campus ministry at St. Bernard College, Cullman College, Southern Benedictine College, appointed pastor to Sacred Heart Parish (Cullman) 1986-1995, appointed member of Presbyterial Council of Diocese of Birmingham, elected Ninth Abbot of St. Bernard Abbey in May 1995, served in that capacity until retirement from that Office in July 2019. In retirement has served as Spiritual Director and Confessor.

Abbot Cletus is a Golden Jubilarian of profession as a monk and priest; a Silver Jubilarian as Abbot.

The son of John J. Manning and Margaret Murray Manning, Br. Charles is the second of three sons. He is a native of Knoxville, Tennessee, where he attended catholic schools under the direction of the Sisters of Mercy. He graduated from Knoxville Catholic High School in 1969 and entered St. Bernard College the following fall. He entered St. Bernard Abbey and professed first vows July 11, 1971. He graduated from St. Bernard College with a BA in Biology 1974. After graduation, he studied physics at Loyola University, New Orleans, where he lived with the Jesuits in formation. After college graduation, he worked for one year in the Biology department at St. Bernard College before attending graduate school. He earned a MS in Aquatic Biology from the University of Tennessee in 1978. While at the university he lived with the Paulist Fathers and made life-long friends in their community. After graduate school, he served at the Registrar the last year of Southern Benedictine College 1978-79. During this time, he taught high-school “Sunday School” at Sacred Heart Parish, Cullman. After the college at St. Bernard closed, he taught sciences at St. Augustine Colle, Nassau Bahamas 1979-1980. He returned to St. Bernard to open the St. Bernard Retreat Center in 1981. He served on the Diocesan School Board for a number of terms beginning in 1979 to 2018. At various times, he has served the monastic community in the formation program, on the senior council, as the chapter and senior council secretary, and in the business office. He was the first non-priest to be appointed Sub-prior of the Abbey by Abbot Hillary Dreaper. Over the years he has enjoyed working on the campus grounds and landscaping, planting a number of trees on campus. He was a member of the planning committee for the opening of St. Bernard Prep School 1983. When St. Bernard Prep School opened in 1984, he taught Biology and Physics in the Prep School 1984-2018. He was appointed the Treasurer (Procurator) for St. Bernard Abbey 2019 and serves in that position at present.

Stephanie K. Eddy Burroughs, 58, of Vinemont, Alabama passed away October 15, 2021, at her home. She was born August 9, 1963, in Roanoke, Virginia, to parents Arnold and Eva Eddy. She was a 1981 graduate of Hartselle High School and a graduate of the University of Alabama where she earned a …