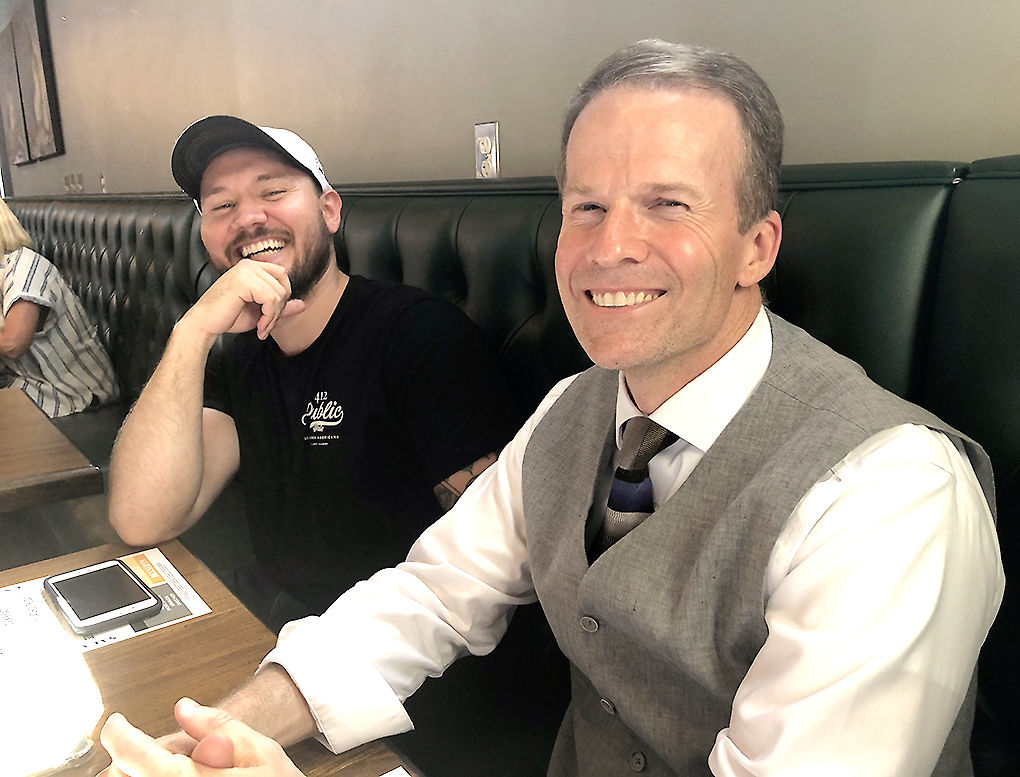 Co-owners Trey Jordan, left, and Stephen Gannon enjoy a pause at 412 Public House Friday while discussing their next ambitious food idea: Seasoned Catering, a catering & restaurant concept that will soon be moving in at the high-perched space formerly occupied by Top of the Town restaurant in downtown Cullman. Also involved in the new venture, but not pictured, is 412 co-owner and head chef Rico Nishimura. 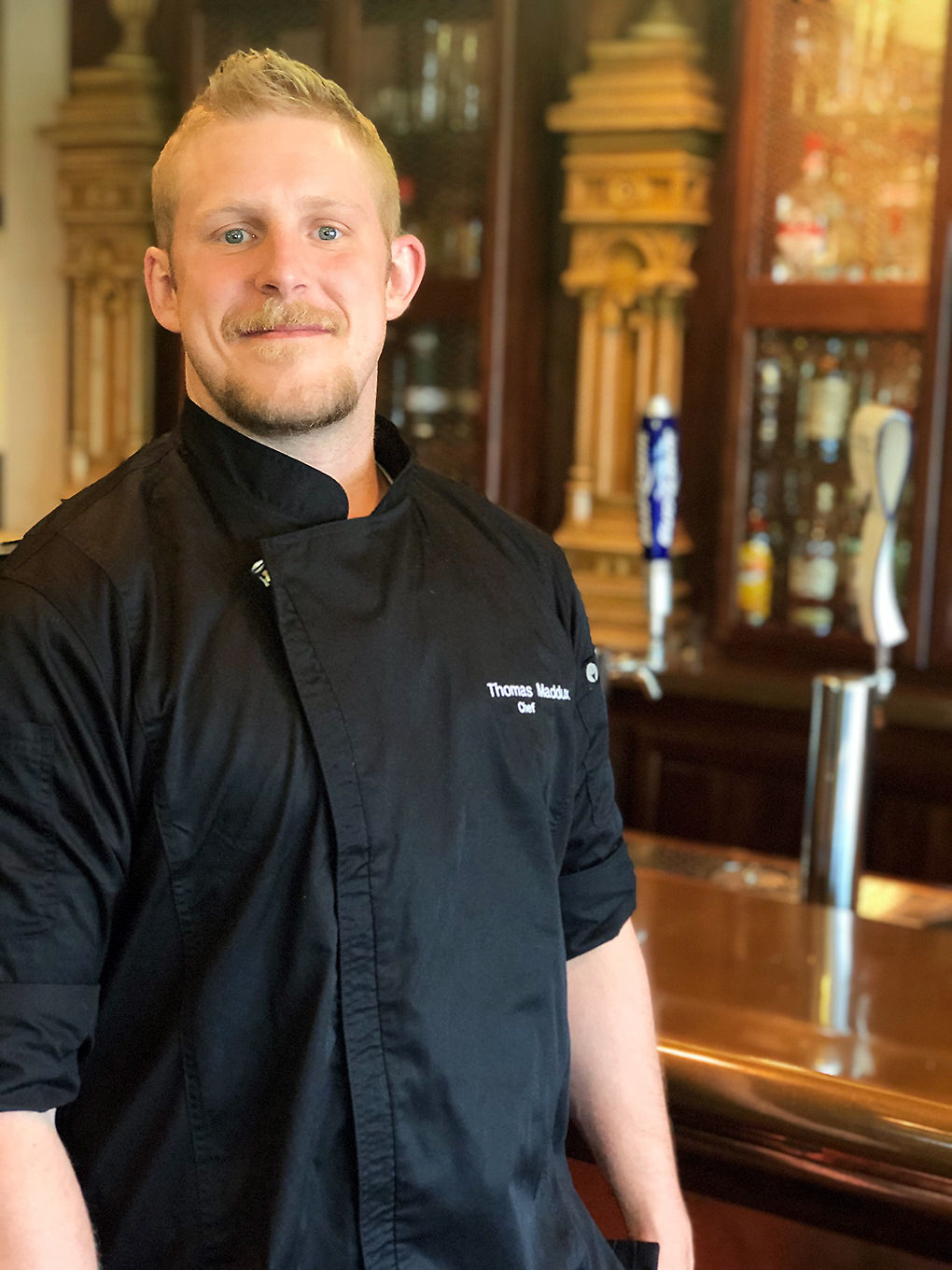 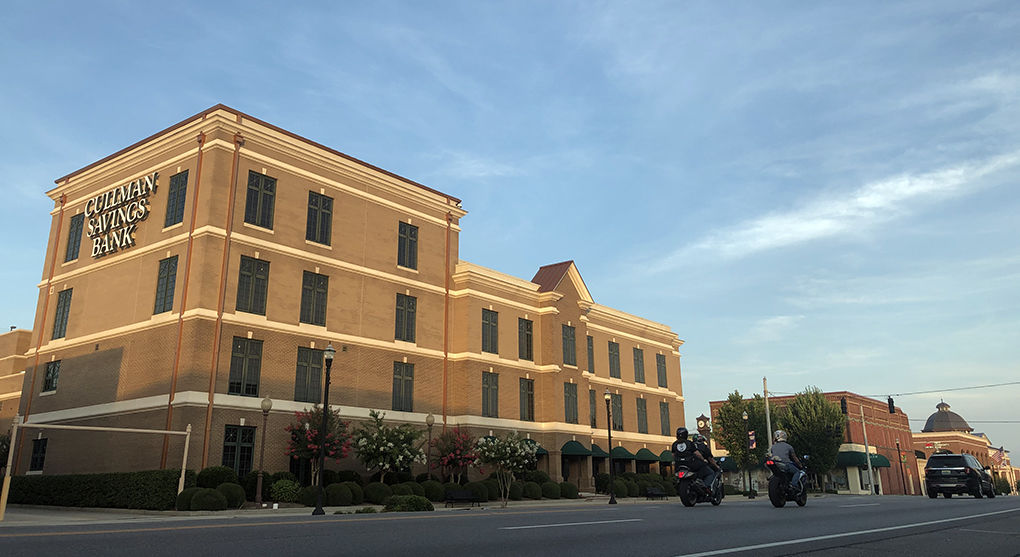 Co-owners Trey Jordan, left, and Stephen Gannon enjoy a pause at 412 Public House Friday while discussing their next ambitious food idea: Seasoned Catering, a catering & restaurant concept that will soon be moving in at the high-perched space formerly occupied by Top of the Town restaurant in downtown Cullman. Also involved in the new venture, but not pictured, is 412 co-owner and head chef Rico Nishimura.

The owners of 412 Public House are about to expand even further their culinary reach in Cullman’s historic downtown.

With a new head chef and one of the city’s most recognizable spots for a home, 412’s owners are prepping the launch of Seasoned Catering, a new, multifaceted catering service and restaurant — all based out of the penthouse level of Cullman Savings Bank. Like the group’s soon-to-open Historic Bakery (right next door to 412), the new business will complement and expand upon the signature, small-scale drinks and dining scene for which 412 already is known.

Local diners won’t have trouble recognizing Seasoned Catering’s location. It’s the former home of Top of the Town, the 4th-floor restaurant (and catering venue for Designs by Grace) that 412 owners Stephen Gannon, Trey Jordan and Rico Nishimura recently acquired in an amicable agreement with the bank and former business owners Mike and Judy Pitts.

Seasoned Catering will serve as the umbrella under which the new concept’s full array of food services, both on- and off-site, will operate. The 4th-floor venue itself will soon reopen under a new restaurant name — City Vista — and will house a newly-rebranded, full-service bar that regulars will come to know as The Copper Top.

Overseeing it all will be new head chef Thomas Maddux, an Alabama native whom Jordan described as a perfect combination of natural talent and professional skill. “Getting Thomas on board was an absolute no-brainer for us,” said Jordan. “He’s incredibly versatile with food, and he doesn’t pigeonhole himself. His culinary background is just unbelievable, and he can pretty much do anything. We’re basically stepping back and letting him run the show.”

Curious locals don’t have long to wait before getting a chance to sample Cullman’s newest food spot. Seasoned Catering will host a soft restaurant opening for City Vista on Sunday, July 19, throwing wide the penthouse’s 4th floor doors on a first-come, first-serve basis. The opening will run from 11 a.m. until 3 p.m., with no prior registration required (though Jordan said he expects the venue to fill up quickly). Although guests can always stop in on Sundays, other hours of operation may only be another day or two during the week.

The catering portion of the new concept will anchor the overall business, with Seasoned Catering offering a flexible and accommodating menu (“We take requests!” says Jordan) — both at the venue, which will be available for reservations, or wherever Maddux and his staff are summoned to bring the party (and the food).

What kind of food can restaurant diners expect? On site, City Vista will open with a menu that Maddux is still refining — but expect to see a curated lineup of refined Southern entrees like Prime Rib with creamy horseradish & Au Jus, Low Country shrimp & grits, and bacon-wrapped pork loin. For next weekend’s soft open, both staff and guests will be following all COVID-19 social distancing and safety guidelines established by the Alabama Department of Public Health, Gannon noted.

“One of the great things about having Thomas,” said Jordan, “is that he really brings a flexibility both to the restaurant, as well as to the catering side of things. The restaurant’s really only the beginning. If you want Cajun; Italian, or pretty much any other type of food for your event, he knows how to do it — and if, for some reason, he doesn’t, he’s one of those rare people who loves digging in and mastering it.”

“This was really the next step that we have wanted to take in Cullman for a while,” said Gannon. “We have an amazing talent here at 412 in Rico [Nishimura], but our venue here is so limited in size; and Rico’s attention has been so in demand as the chef here, that we’ve really been looking for an opportunity somewhere else in Cullman to branch out.

“Mike and Judy Pitts, as well as Cullman Savings Bank and everyone involved, have been so incredibly gracious, in terms of their time, vision, and overall good will, to help us get up and running,” he added. “I really can’t express enough our gratitude to Cullman Savings Bank for putting their trust in us; in our ideas and our commitment to the business — and to Cullman.”

Tapping the power of food as a vehicle for culture, as well as the most fundamental way to bring people together, has always propelled the concept for all of the group’s restaurant and related business ideas, added Jordan.

“It’s really been our goal at 412, as well as at the new bakery and everything we’re doing, to create a constant and evolving food culture for Cullman,” he said. “I think food is the way to introduce new things in cities that are growing like ours. Since we’ve started doing this with 412, we’ve legitimately fallen in love with everything about food service in Cullman, and it’s really become a passion for all of us. We love making people happy through food, good company, and great service, and we really want to keep bringing that to Cullman in as many ways as we can.”