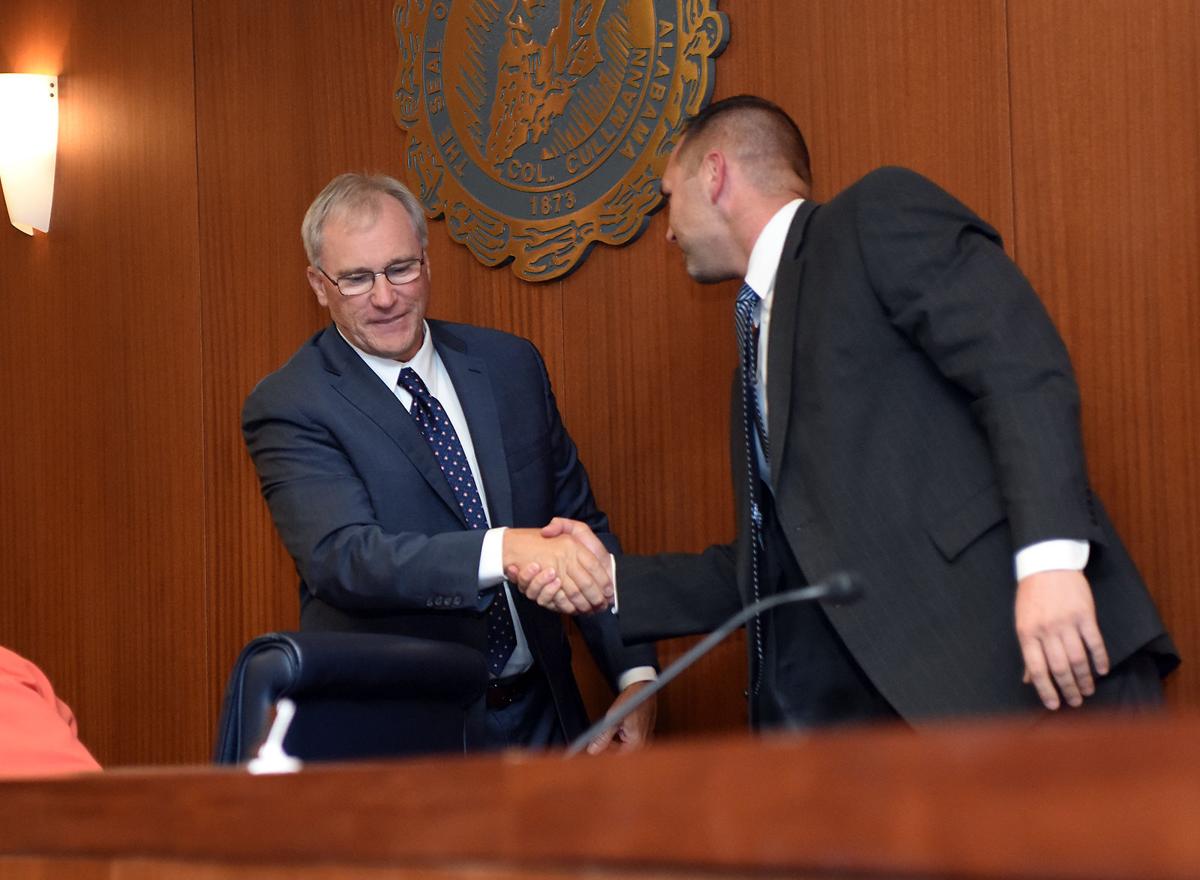 David Moss, left, is congratulated by Clint Hollingsworth as Moss takes his seat on the Cullman City Council Monday night after being sworn in replacing Garlan Gudger. Gudger officially resigned from his position Friday afternoon as he prepares to enter his new role as an Alabama State Senator. 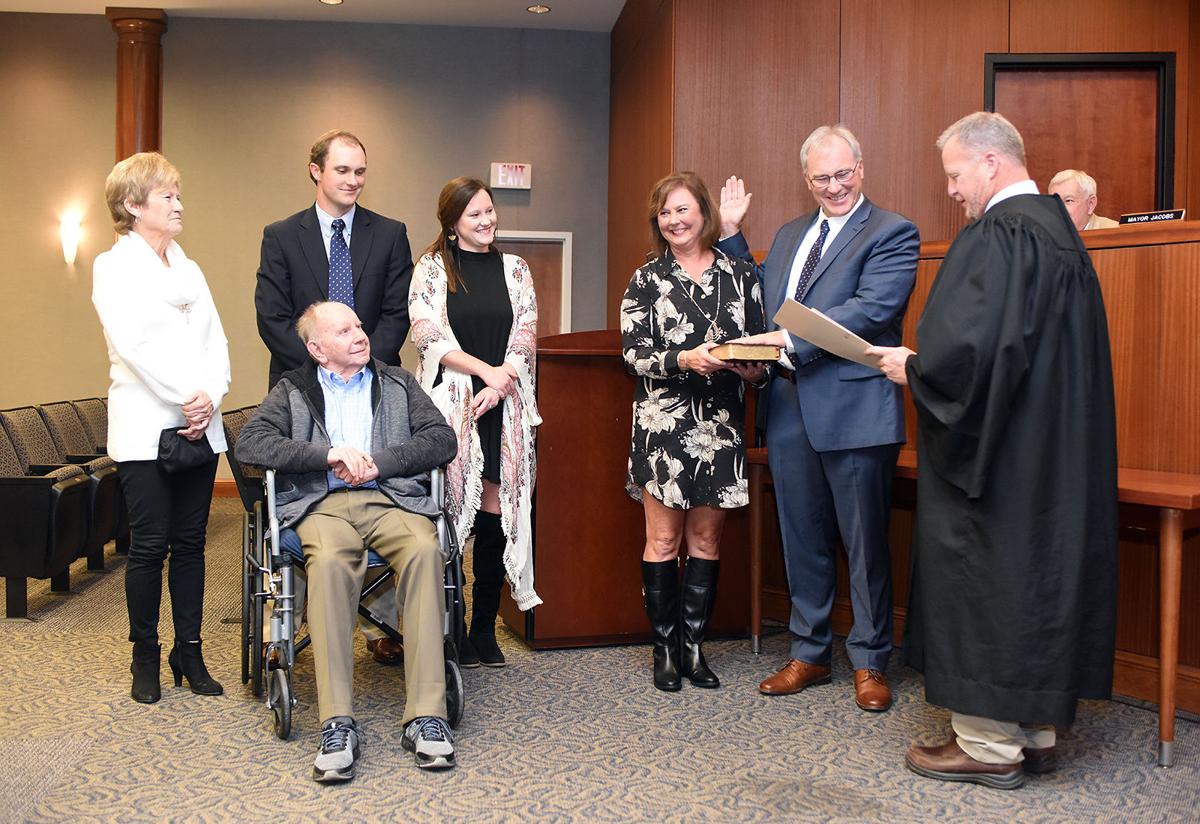 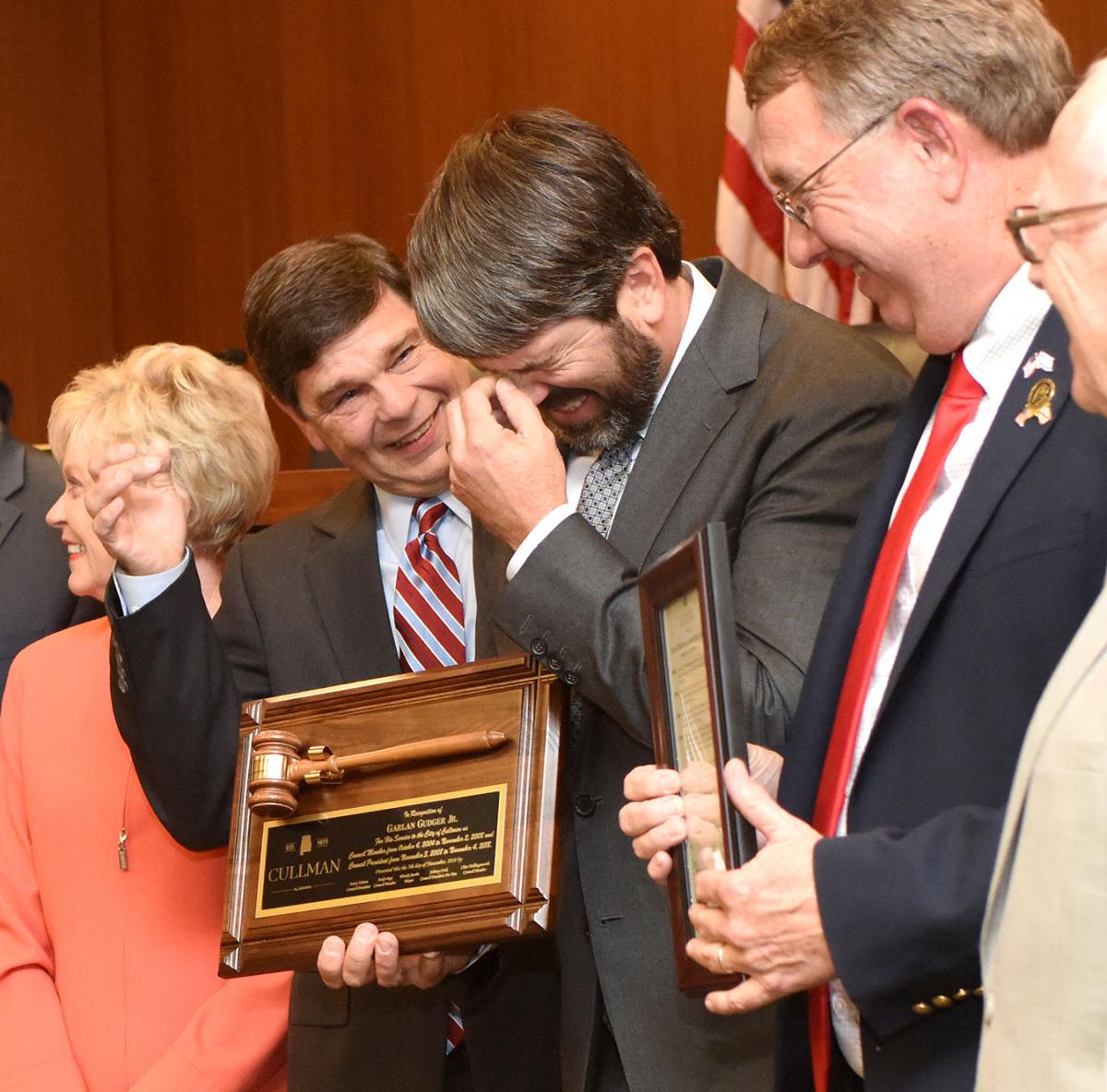 David Moss, left, is congratulated by Clint Hollingsworth as Moss takes his seat on the Cullman City Council Monday night after being sworn in replacing Garlan Gudger. Gudger officially resigned from his position Friday afternoon as he prepares to enter his new role as an Alabama State Senator.

An emotional night of change highlighted the Cullman City Council meeting as David Moss Jr. took a seat on the governing body while former council President Garlan Gudger was honored for 14 years of service.

Family and friends of the two leaders attended the Monday meeting, which saw a unanimous approval of Moss coming onboard the council and Gudger expressing his appreciation for his colleagues and the city he has served. Gudger is moving to the Alabama Senate, representing District 4, after winning the Republican Primary and having no opposition from the Democratic ticket.

“I’m very excited to have the opportunity to serve on the City Council. Someone had asked if I would be interested in serving, and it’s an honor to join with this group and continue working on all the good things that have happened in Cullman,” said Moss, whose grandfather, the late Grady Moss, and father, David Moss Sr., who attended the meeting, established Moss Service Funeral Home.

Moss is a sales manager for Oriental Weavers of Dalton, Georgia, which distributes products across the nation.

Gudger served 10 of his 14 years on the council as president. During his tenure the city has enjoyed unprecedented industrial and retail growth, particularly since the 2011 tornado outbreak.

“Thank you, everyone, for your support through these years,” Gudger said as he was presented a plaque for distinguished service and his gavel and plaque from City Council President Jenny Folsom.

“I know you never want to take credit for it, but you always met with everybody and you were a leader as the city was growing,” Hollingsworth said. “And the first call I got was from you when I had lymphoma.”

Graveside Service for Hermina Johnson, age 82, of Vinemont, will be announced at a later date. Cullman Heritage Funeral Home is in charge of arrangements. Mrs. Johnson passed away on Tuesday, December 1, 2020 at her residence. She was born, October 14, 1938 to Herman Schaffer and Louise Scha…

Mary Grace Smith of Cullman, passed away on Sunday, November 29, 2020 at the age of 94. She was born on February 25, 1926 to Ewell C. and Myrtis B. Smith and grew up on a farm in the Fairview community. She graduated from Fairview High School in 1945 and was the youngest member of her class.…