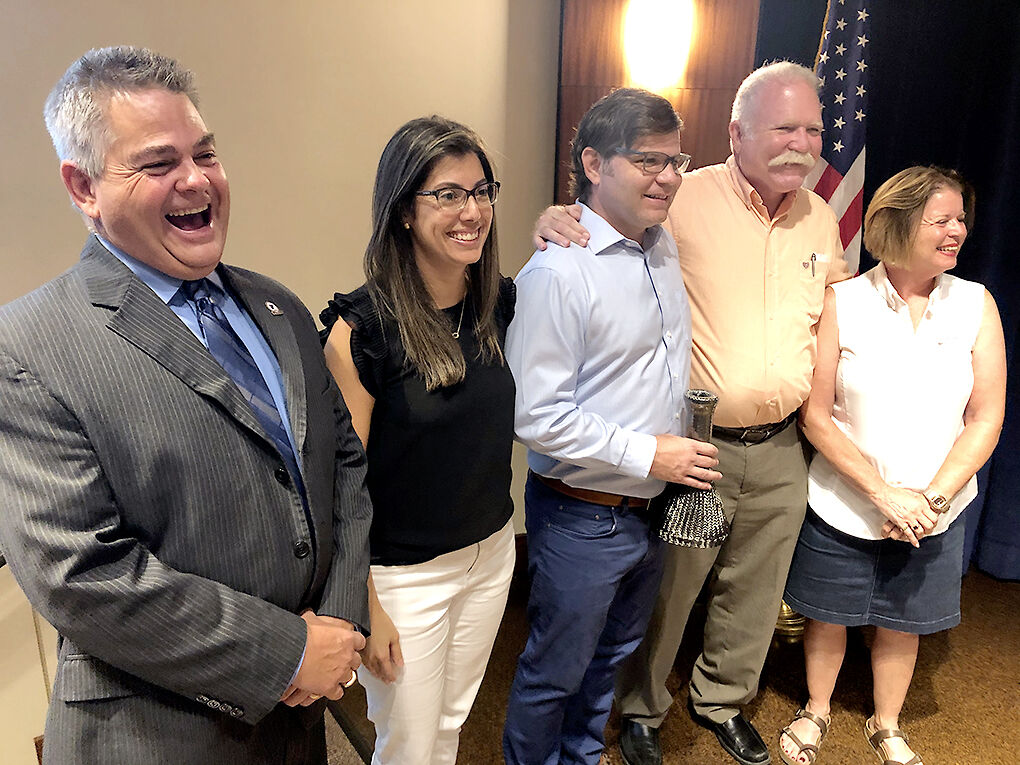 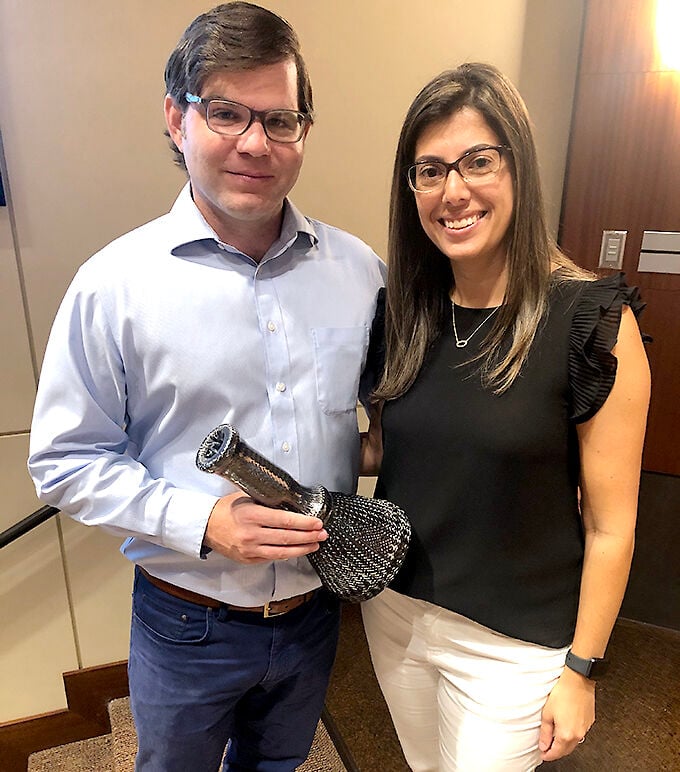 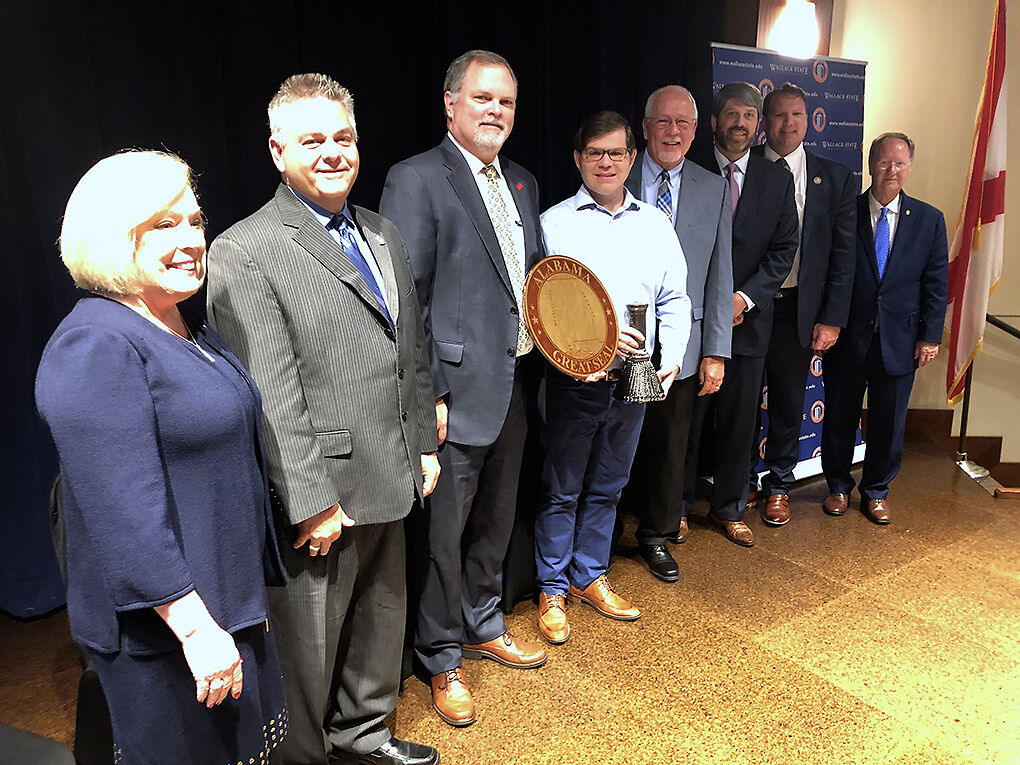 HANCEVILLE — A small manufacturer is bringing some big high-tech ideas to Hanceville.

Startup materials engineering company DBTechnologies revealed its intention to make Hanceville its permanent home base Friday, drawing a crowd of local leaders to a heavily-attended announcement event at Wallace State Community College. Since DBTech’s founding, WSCC has served as its temporary startup host as the business has progressed from an idea into an operation that’s outgrown its donated space on campus.

The announcement was a big deal — not for the fact that it’ll jumpstart the company with six high-tech jobs already in place (and an estimated two dozen more likely on the way as operations expand). Rather, the buzz was all about the organic, home-grown way that DBTech found a receptive community host in Cullman County, and about the cooperation between local governments, education, and legislative leaders that made it happen.

Founder and owner David Branscomb, a Ph.D. who’s developed proprietary materials technology to create strong, heat-resistant woven fiber that can be used in everything from tennis rackets to rocket boosters, credited Wallace State for helping get his business off the ground, as well as Hanceville leaders for scurrying to secure DBTech as a long-term industrial tenant.

“Without the support of Wallace State Community College’s business incubator program, we could not have started the business or completed many of our projects,” he told a crowd that included county commissioners, members of all three local industrial development boards, Hanceville, Cullman, and Good Hope city leaders, utilities representatives, and local legislators.

“Being part of the business incubator has provided space, infrastructure, and important resources that are necessary for us to grow,” he said, adding that his company, in its brief lifespan of less than two years, already has employed Wallace State graduates.

What does DBTech make? Branscomb, who owns the business with his wife, Dr. Patricia Branscomb, explained their sophisticated materials tech startup as one that “specializes in employing high-strength fiber-reinforced materials, such as carbon, aramid [a materials class that includes Kevlar and Nomex], and ceramics.

“We utilize advanced materials in concert with additive manufacturing and textile technology to solve important problems where conventional materials are inadequate. Our unique product solutions are currently employed in nuclear, automotive, military, and oil and gas markets,” he added. “If you need to make things lighter and stronger, we can help.”

In a community first, the City of Cullman contributed $25,000 in initial funding to help Hanceville get started on redeveloping an existing building for the company to occupy. That kind of cooperation — putting skin in the game to help land an industry in a neighboring city — typifies what makes the business climate in Cullman County, and the many personal partnerships that nurture it, a rare and unique environment for companies in search of a place to put down roots, said Hanceville mayor Kenneth Nail.

“This is they way government should work,” he said, turning to Ted Clem, director of the Alabama Department of Commerce’s Business Development division, who represented the state and Gov. Kay Ivey onstage.

“The way this project came together is one of the most unique things I’ve ever seen,” added Cullman Economic Development Agency director Dale Greer, whose office fielded an initial inquiry from Branscomb that eventually led the company to Wallace State. “It is the most unique thing I’ve seen in more than 20 years of economic development experience,” he added, remarking on the community cooperation that aided DBTech’s growth at the bootstrap level.

In all, money and in-kind labor backing from Cullman, Hanceville, the Industrial Development boards and other sources will total more than $400,000 to prepare the new facility, a 55’ x 280’ building located on Alabama Highway 91 at the city’s western edge. That doesn’t count capital investment from DBTech itself, which will move its current equipment into the new building even as it plans for future growth.

The company certainly has the brain power to support its vision. Branscomb named a list of research partners that include Oak Ridge National Laboratory, NASA, Auburn University, and the University of Tennessee at Knoxville as collaborators in developing or deploying the tech behind the company’s proprietary process — which itself was hatched from Branscomb’s Ph.D. work, supported by the Alabama Space Grant Consortium, while at Auburn.

COVID-19 travel restrictions and other large-market forces of the past few years had previously obstructed Branscomb’s early efforts to give his ideas a firm business footing. But on Friday, he sounded happy to finally have found a place that offers the stability and support that a small tech startup needs. “We look forward to growing our business and developing jobs in this community,” he said.