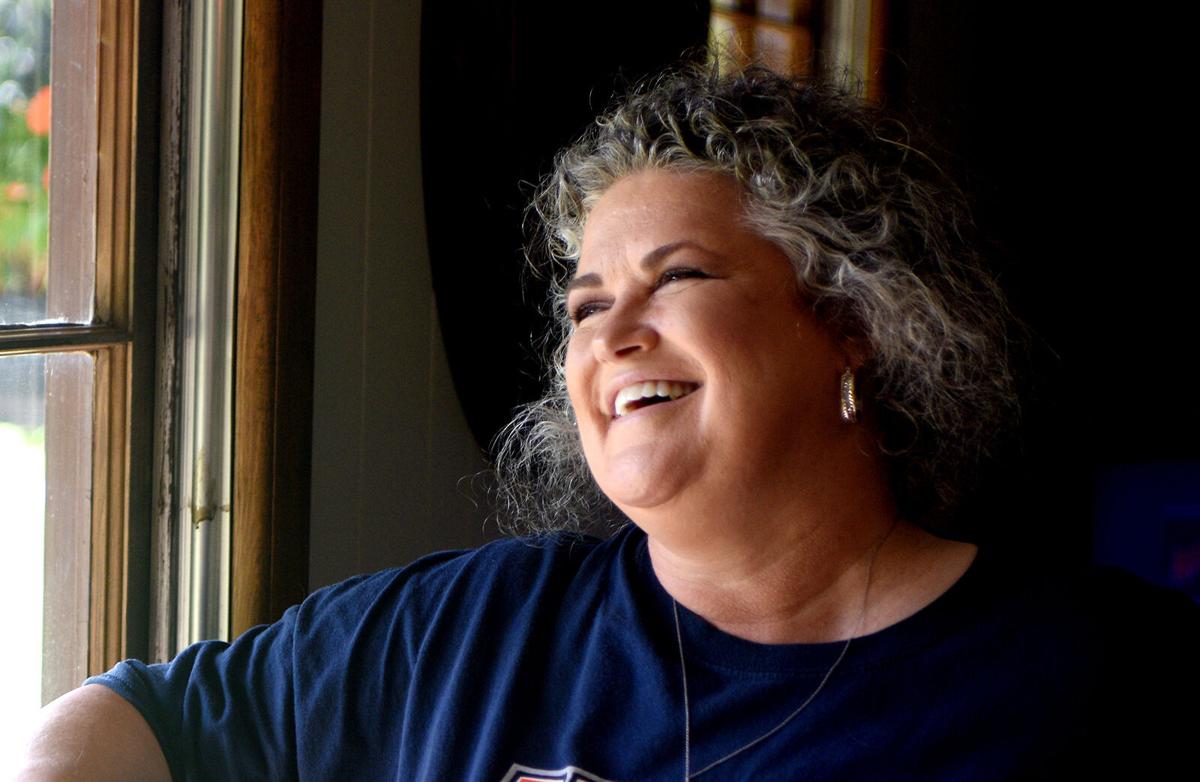 COVID-19 survivor Kimberlee Chambers Striker is seen at her home in Fairview on Thursday morning. “I try to stay happy and keep a smile on my face. It’s hard to do, but I do.” 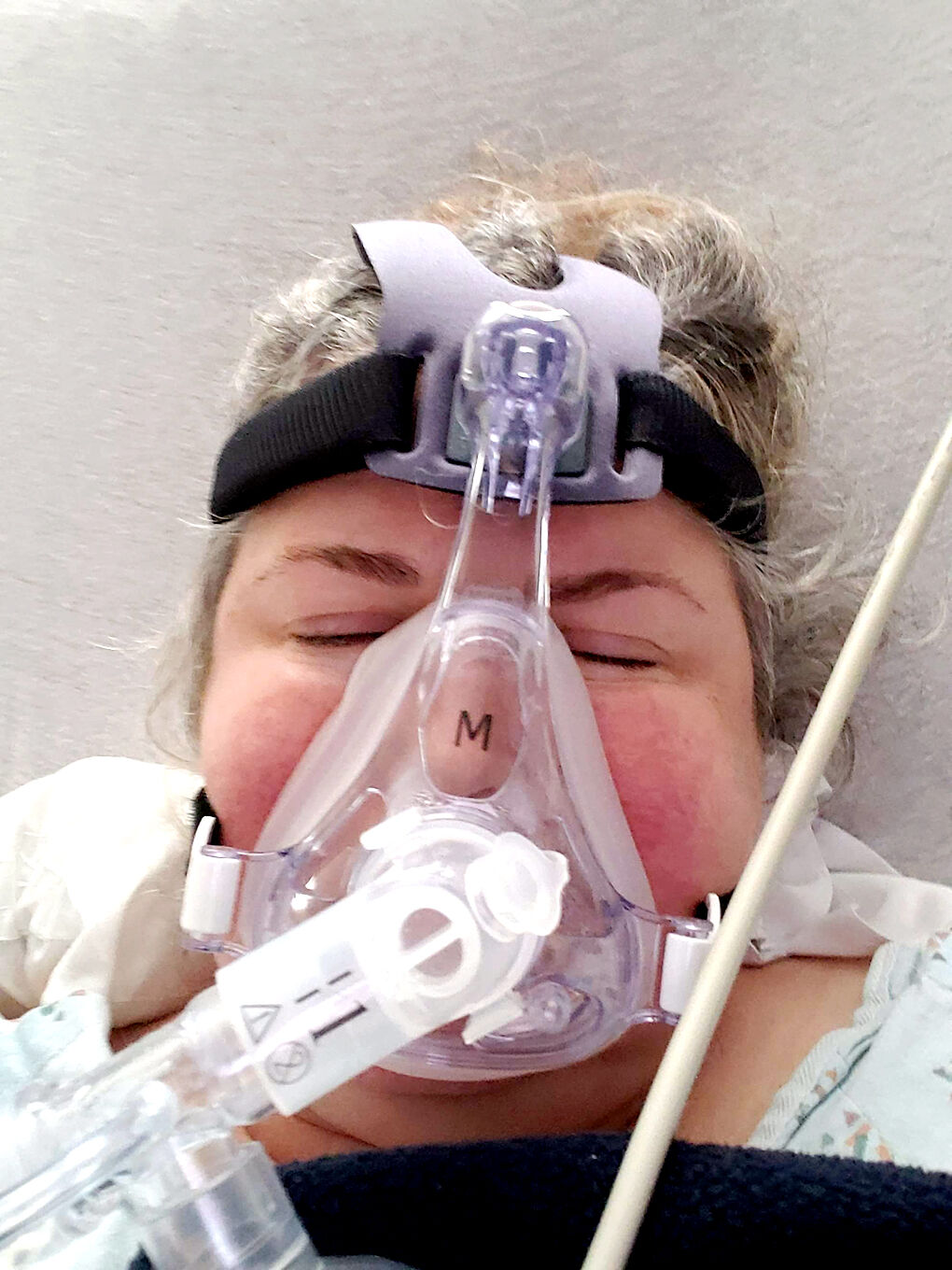 “I couldn’t move, I couldn’t talk, I could hardly swallow. It damaged my vocal chords, they’re still damaged,” said Kimberlee. 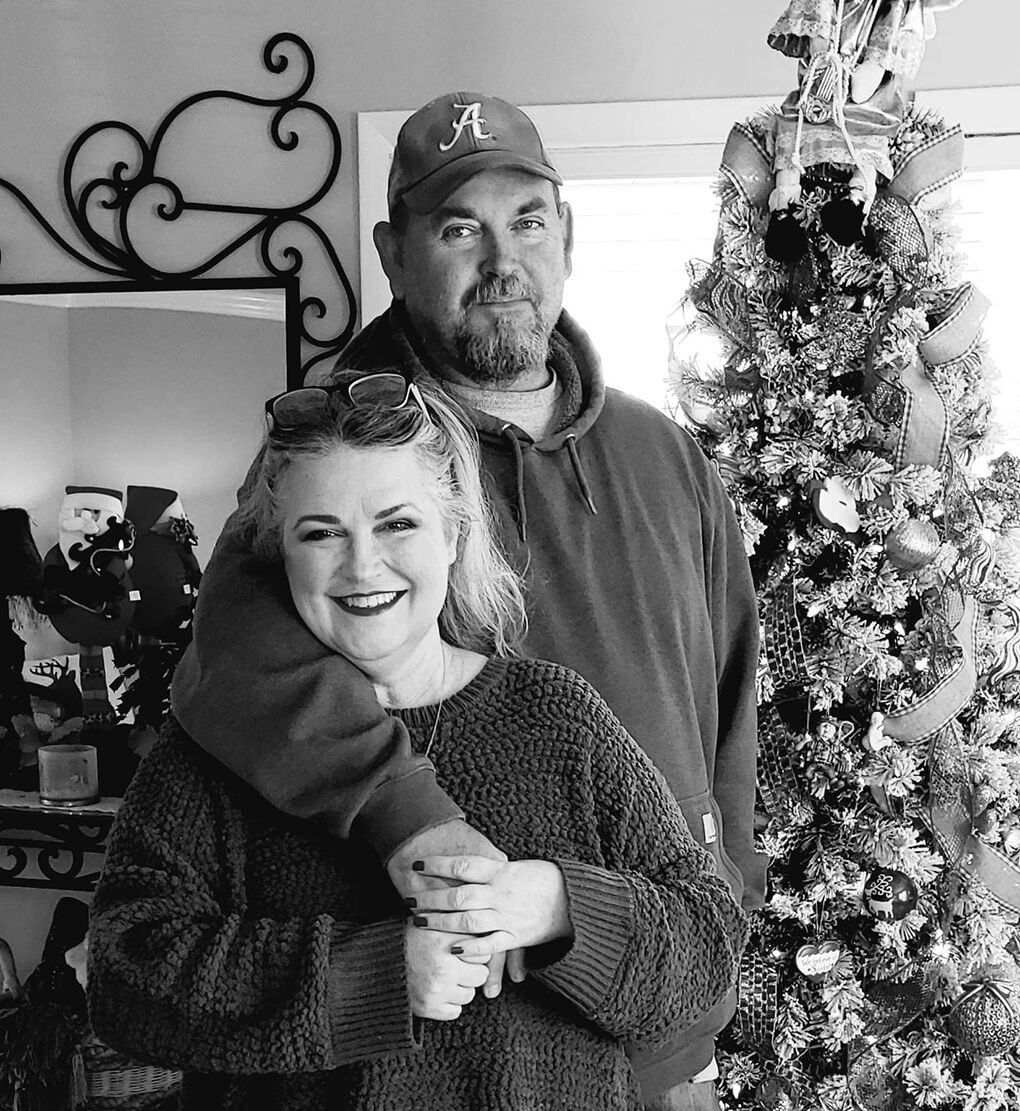 This October, Kimberlee and Shawn will celebrate 20 years of marriage. “To see your husband cry... he’s a big, strong logger, he don’t cry. That broke my heart.’ Kimberlee says she would rather be sick than be in her husband’s shoes. 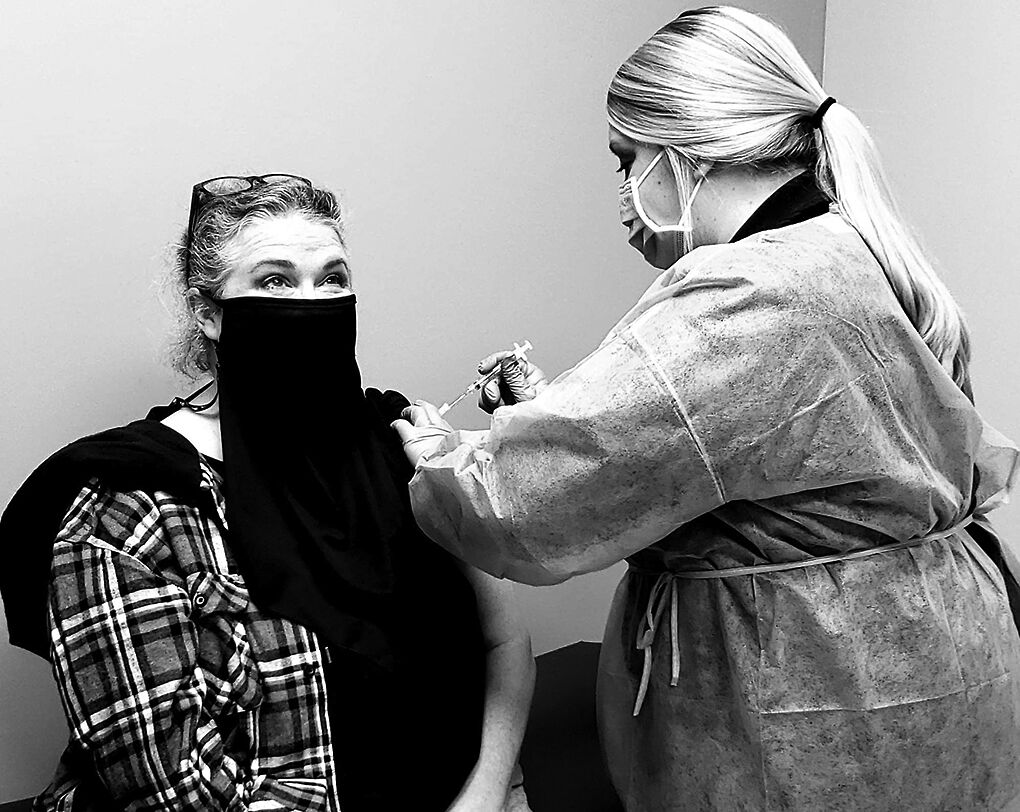 Kimberlee said she was near tears when she got her vaccination. “I trust those people making the vaccines. God put intelligent people on this Earth to help us.” 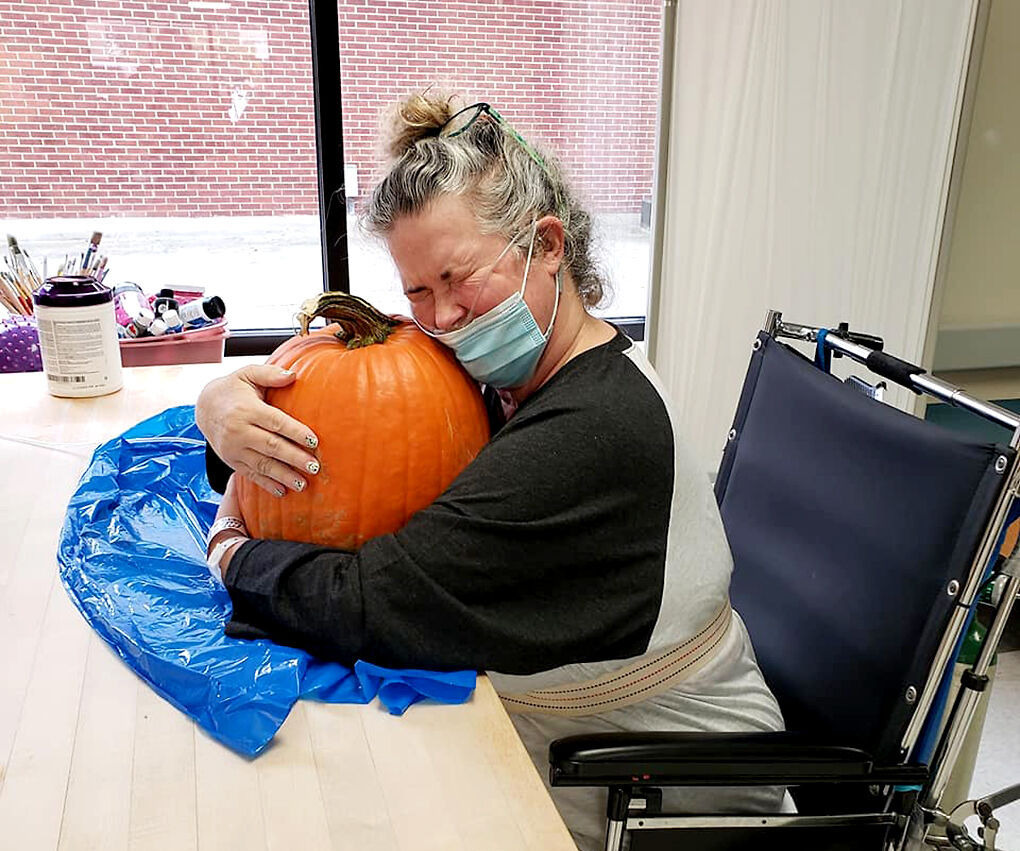 A huge Halloween fan, Kimberlee didn’t think she would be home in time to celebrate last year. Her physical therapist in Huntsville surprised her with a pumpkin to paint as part of her occupational therapy. “I cried,” said Kimberlee. 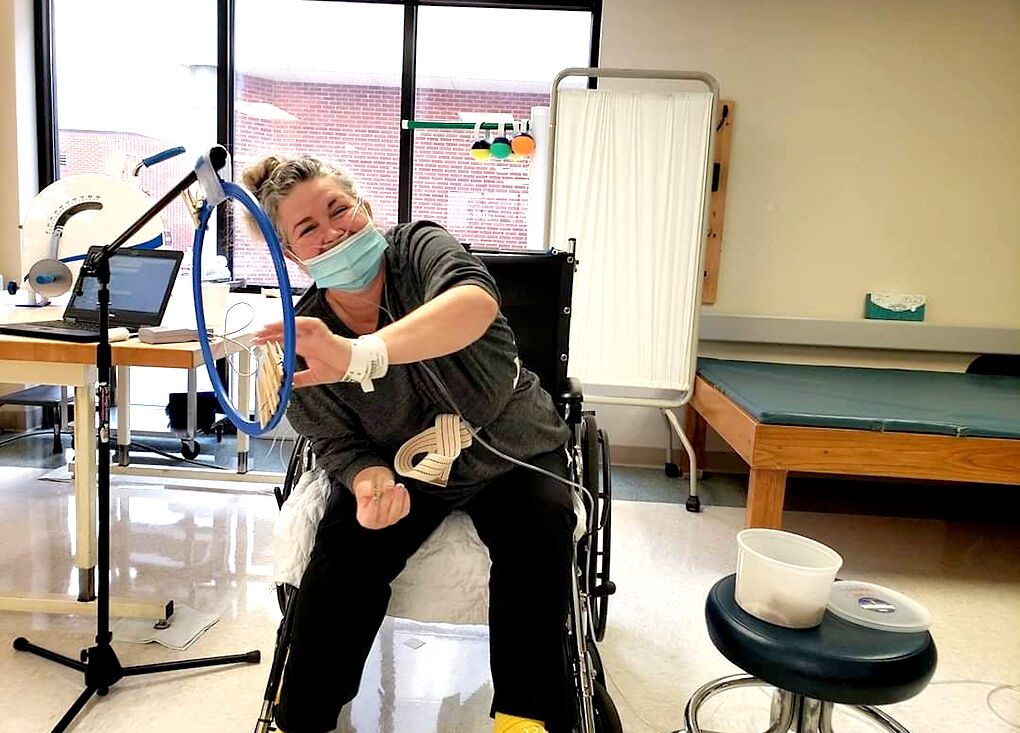 COVID-19 survivor Kimberlee Chambers Striker is seen at her home in Fairview on Thursday morning. “I try to stay happy and keep a smile on my face. It’s hard to do, but I do.”

A huge Halloween fan, Kimberlee didn’t think she would be home in time to celebrate last year. Her physical therapist in Huntsville surprised her with a pumpkin to paint as part of her occupational therapy. “I cried,” said Kimberlee.

Just a little over a year ago, Kimberlee Chambers Striker started coughing. The cough got progressively worse and her lower back hurt. She was tired. She couldn’t breathe.

“It’s a panic like you’ve never felt,” she said. “You can’t take a deep breath. You just try to stay calm but it’s hard to do.”

She went to the emergency room, twice. The second time, she told her husband, “When you take me today, I’m not coming back.”

Kimberlee did come back, or at least she got out of the hospital, but she continues to battle the longterm effects of COVID-19. She is one of the estimated 80% of covid patients who suffer from the effects of the disease well after the onset of the illness. Common symptoms so-called “long haulers” face include fatigue, headache, body aches, difficulty breathing and joint pain.

This October, she and Shawn will celebrate 20 years of marriage. The couple, who don’t have children, enjoyed getting out and doing things together. She was an avid angler, gardened and did hair at her salon.

“I was very active,” she said.

The night that Shawn watched her being wheeled off into the Emergency Room at Cullman Regional changed all that.

“He sat in the parking lot for three hours, thinking I was going to come back out,” she said. Finally, he called her cell phone. “I told him, ‘Baby, you need to go home, they’re going to put me in ICU.’ He just got really quiet,” said Kimberlee.

Shawn also came down with COVID-19, but his case was mild. That is fine with her. “If I had to do it all over again, I’d rather be sick than be in his shoes,” she said.

Shawn had to get updates from doctors and nurses as to how his wife was doing.

She wasn’t doing well. “They were trying everything and I was fighting them,” she said. “I wouldn’t leave the BiPap on and they told me they talked to me about it.” She doesn’t remember that.

Nor does she remember when they put her on a ventilator. She told the nurse she didn’t want to remember it.

“Nurse Patterson said, ‘I promise you won’t remember any of it,’ and I don’t,” said Kimberlee. The ventilator, she said, “Is definitely something you don’t want to be put on.”

“That was wild,” she said. “I couldn’t move, I couldn’t talk, I could hardly swallow. It damaged my vocal chords, they’re still damaged. My husband, who is not an emotional person, was leaning over me with big tears coming out of his eyes.”

Shawn’s emotional response was perhaps the biggest shock to her. “He was crying. I’ve never seen him cry. I was looking at him and I thought, ‘what have you done?’” she said. “The last thing I remembered was passing out in the emergency room.”

When they told her everything she’d been through in the past month, she thought at first they were joking.

“When I realized he wasn’t lying it was very emotional. To see your husband cry,” she paused, the emotion of that day still with her. “He’s a big, strong logger, he don’t cry. That broke my heart.”

The beautician lost handfuls of hair and toenails. She gets splotches on her skin and had a fungus creeping up her legs. She thought she’d lost all her teeth.

“That was the weirdest feeling,” she said. “I kept asking my husband were my teeth okay. He said they’re fine, but they still feel loose.”

She had to suffer the ignominy of using a bed pan, having others bathe her, and her husband changing her diapers. “That is something you don’t ever want to happen,” she said. “It’s total humiliation.”

After being released from the hospital, she was sent to rehab clinics for another three months. Although she’s home now, the past year has been an extension of the rehab she started there.

“I’m still doing pulmonary cardiac rehab,” she said. “I’m still trying to strengthen my lungs and the muscles around my lungs.”

She didn’t go home empty handed. “You bring in handicapped stuff into your home to help you,” said Kimberlee. “Walkers, canes, shower seats.”

The fatigue that set in with the covid has not passed. “It’s a fatigue you’ve never experience in your life,” she said. It takes her 20 minutes getting up the stairs. Even showering, maybe especially showering, is exhausting.

“It got to where you don’t want to take a shower because it wears you out so bad,” said Kimberlee.

Where once she was on her feet all day cutting and coloring hair, she’s limited to just haircuts because her damaged lungs can’t bear the chemicals from the processing. These days, she has more doctors appointments than hair appointments. Along with her general practitioner, heart and lung doctors, she’s seeing an ob/gyn, dermatologist and, if her persistent headaches don’t improve, she’s going to be seeing a neurologist. She will likely have to see a rheumatologist as well.

“I know some of it is not going to get better,” she said. “It changed my life big time.”

“I don’t know if my lungs will ever be back to normal. I can’t really make it all day talking,” she added. “I tried to do a friend’s haircut and instead of 10 minutes it took 45. There’s no way I can go back to work like I did, making that much money.”

She clings to her positive outlook, something doctors told her likely played a role in her recovery. “I think I’ve only had two mental breakdowns,” she said. “I try to stay happy and keep a smile on my face. It’s hard to do, but I do.”

Especially hard are those friends and clients who refuse to get vaccinated. “Mentally it is . . .” she paused. “I can’t talk about that a lot because that hurts. That hurts. I’ve begged and begged. I just don’t understand. I don’t judge, I just pray they don’t have to go through the hell I’ve been through.”

Had the vaccine been available before she fell ill on Aug. 30 last year, Kimberlee said, “I would have got it in a heartbeat. I trust those people making the vaccines. God put intelligent people on this Earth to help us.”

Her battle with covid has been one of resilience and determination, and it’s also reminded her of what’s important.

“We all need to love each other, and take care of each other,” said Kimberlee. “The thing I craved, aside from being able to taste food, was hugs. My thing now is to love harder and hug longer. Every hug means so much to me.”