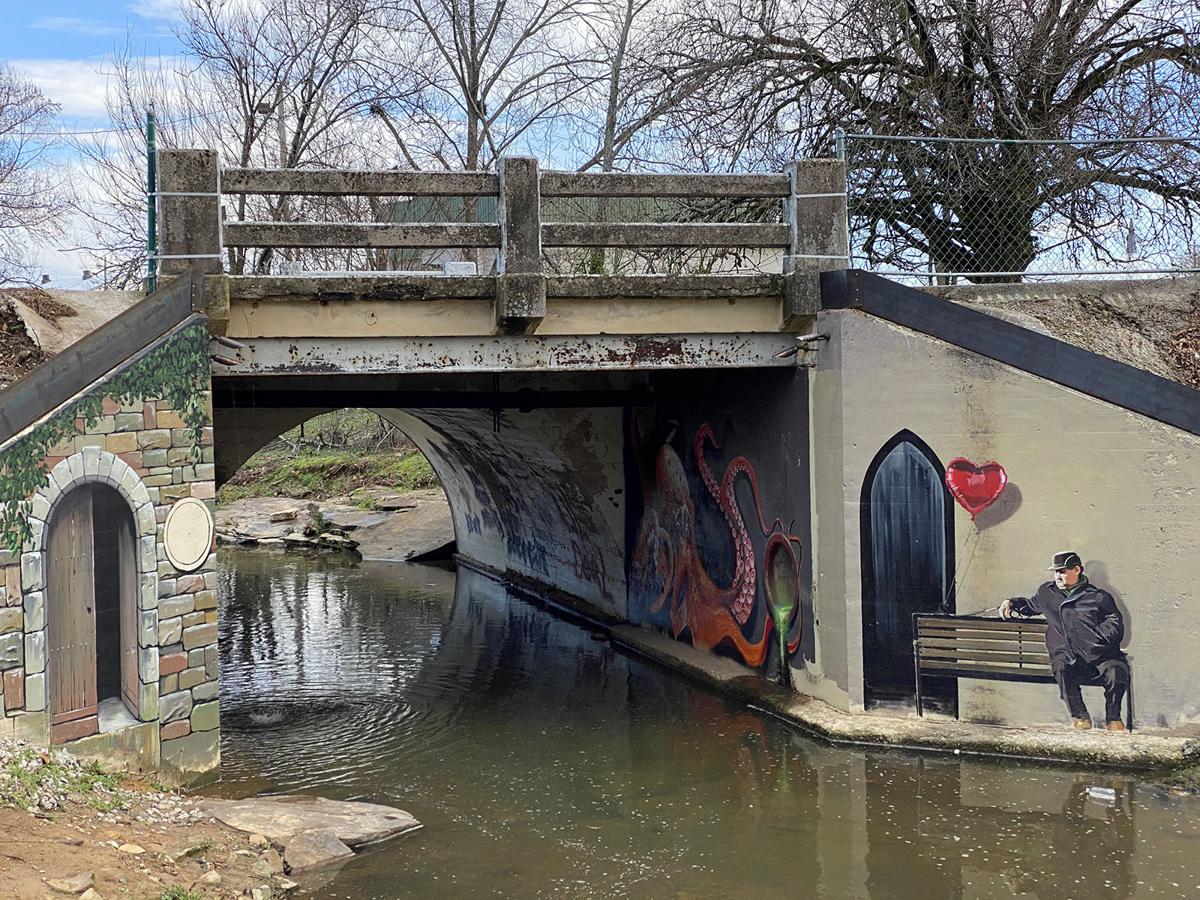 Drivers are probably unaware of the art work created by Donald Walker beneath them as they pass by Art Park along Main Avenue in Cullman. 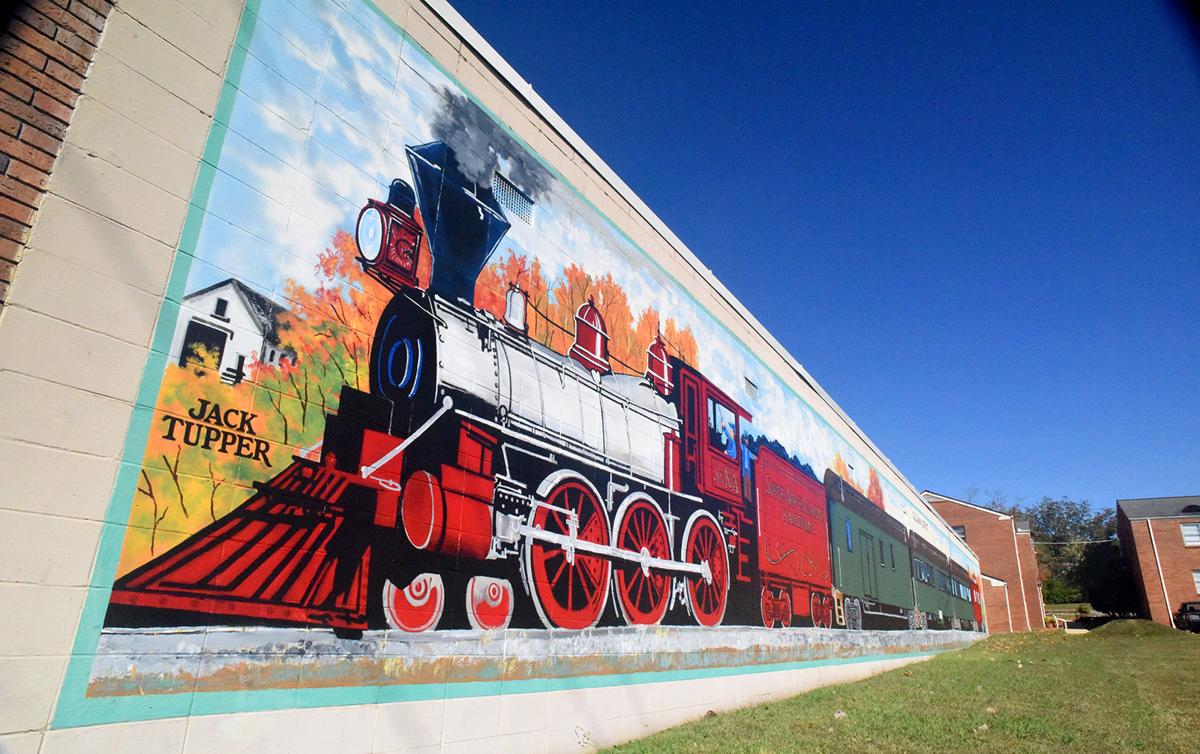 Drive along 2nd Avenue Northeast in Cullman  and you won’t be able to miss Jack Tupper’s mural of Cullman’s first railroad. 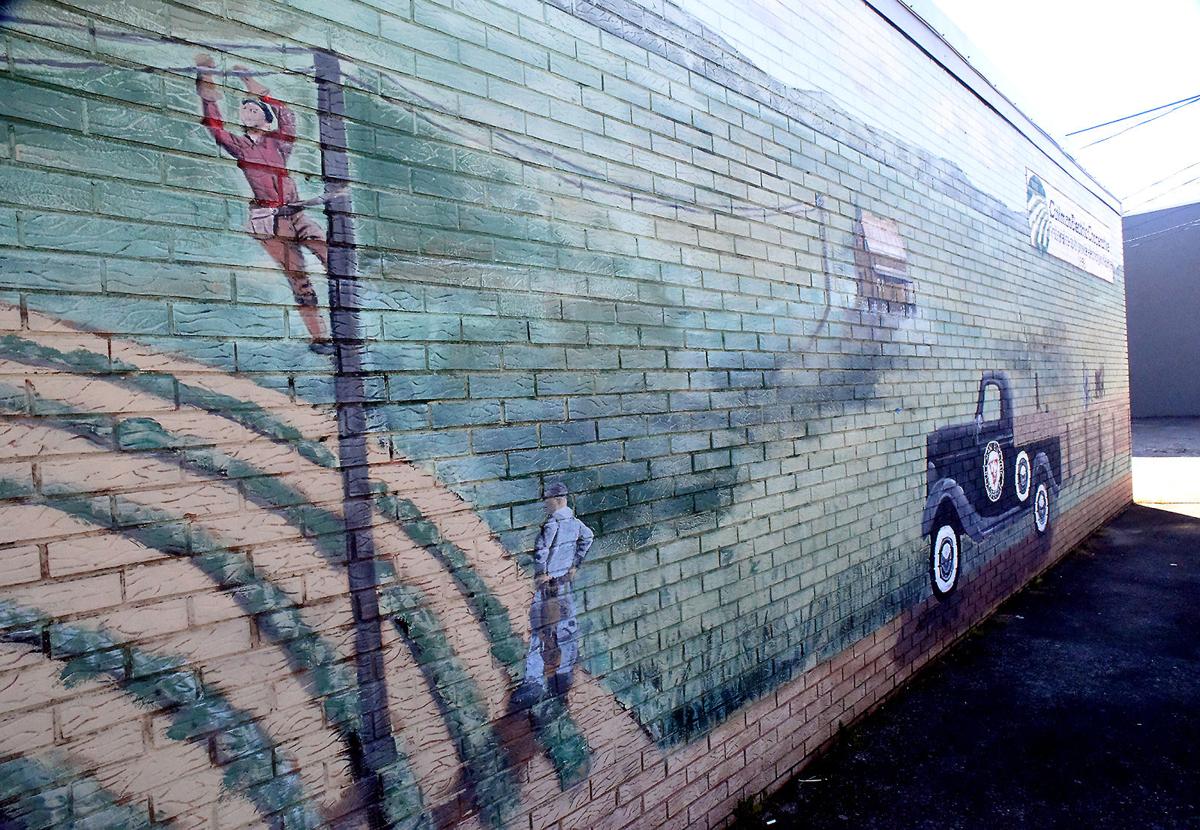 Bethany Kerr created this tribute to the Cullman Electric Co-op. Find it on 2nd Street Southwest. 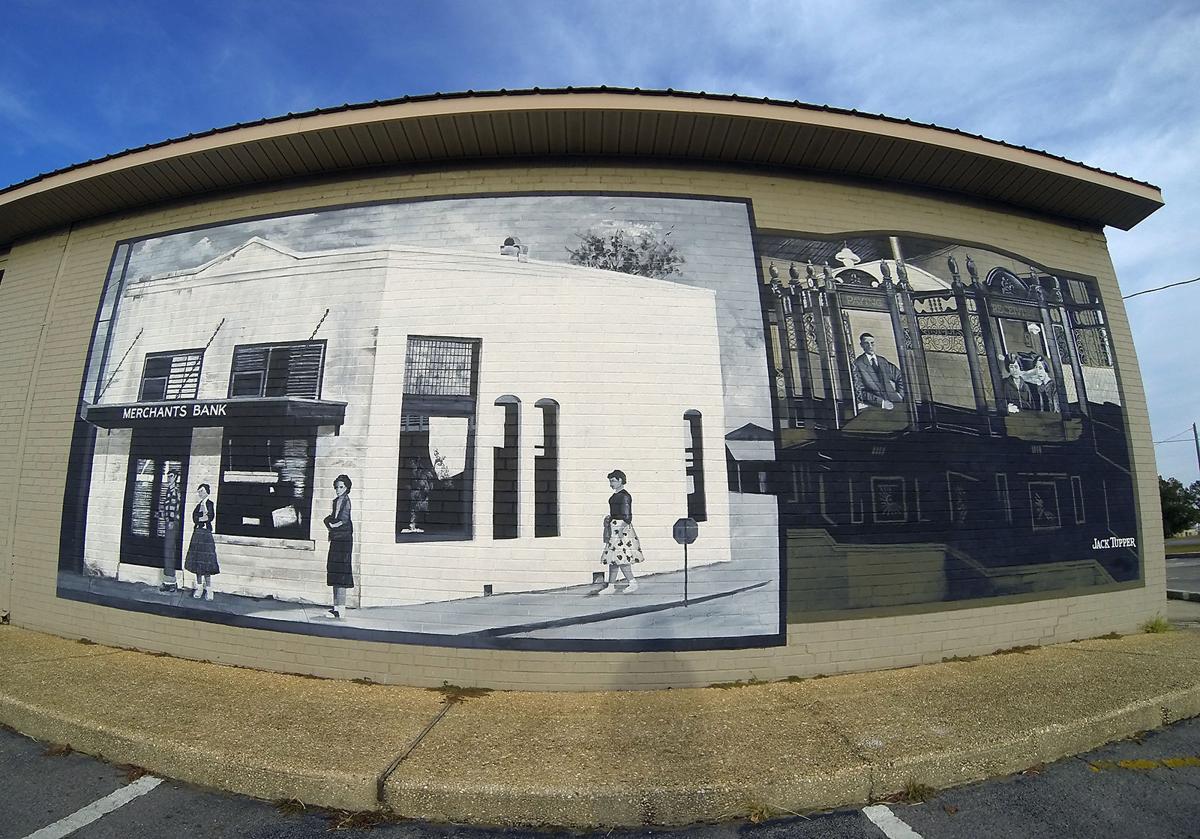 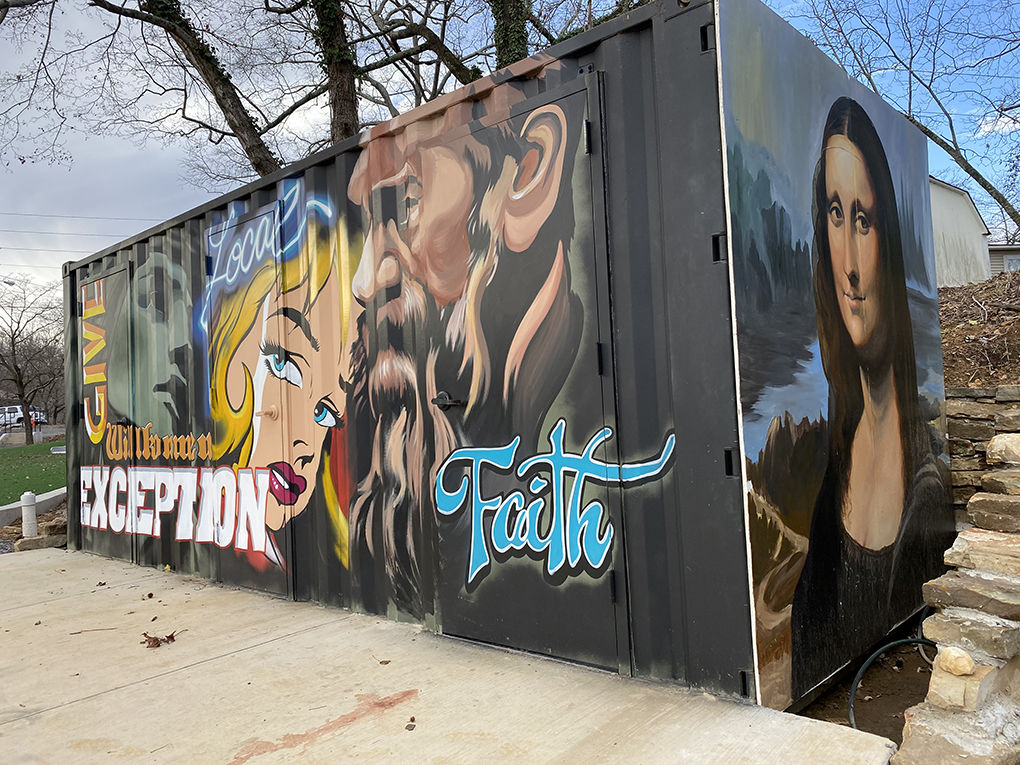 Even the restrooms at Art Park are eye popping, thanks to artist Donald Walker.

Drivers are probably unaware of the art work created by Donald Walker beneath them as they pass by Art Park along Main Avenue in Cullman.

Drive along 2nd Avenue Northeast in Cullman  and you won’t be able to miss Jack Tupper’s mural of Cullman’s first railroad.

Bethany Kerr created this tribute to the Cullman Electric Co-op. Find it on 2nd Street Southwest.

Even the restrooms at Art Park are eye popping, thanks to artist Donald Walker.

If Alabama’s old brick walls and cracked building facades could talk, they would likely tell an elaborate story of a state that’s experienced profound transformation in the past century. Downtown drags coming to life, falling into disrepair, then experiencing a rebirth — these are just some of the storylines that might emerge if these walls could talk.

Thanks to countless artists — and an initiative led by the University of Alabama’s Tourism & Community Development Center — those stories are becoming less speculation and more concrete.

For the past few months, the Tourism & Community Development Center (an extension of the university’s Center for Economic Development), has been curating a list of Alabama’s public murals. From large-scale street art to small-scale scenes depicting community character, these murals, collectively, help tell the story of our state.

The goal of the initiative — currently referred to as The Alabama Mural Trail — is to locate murals in all 67 Alabama counties. To date, Cullman has submitted more than 20 murals to be featured in the project.

“With Cullman’s murals, it tells the history of the community,” said Susan Eller of the Cullman Economic Development Agency.  “Many of the buildings in the Historic Central Business District have signs of former businesses.  It reminds us of how much the community has grown, but also keeps a link to the past.”

Candace Johnson, community development project manager leading the charge for the Mural Trail, said the goal of the project is to visually capture the concept of Placemaking in each Alabama county. Placemaking, Johnson explained, is a way for communities to capitalize on their public spaces to create scenes that promote a sense of joy and wholeness while also driving foot traffic to areas of town that might not otherwise be visited.

“Murals are the perfect way to do that,” she said.

By compiling a list of counties, murals, and artists, the project will collectively help tell the story of Alabama and its communities. So far, the project has collected information on 474 murals — and that’s just the tip of the iceberg, Johnson said.

“When this first started in my head I thought, ‘we’ll have this nice printed piece that people can check off like a passport,’” Johnson said. “Well, clearly that is going to take on a different life and we’re going to do a lot of it digitally.”

What the final product of The Alabama Mural Trial will look like is still to be determined. It could be a social media platform, a book, a website — or maybe all three. One thing is for certain, however. Cullman will have a great presence in the project. With dozens of murals already submitted, the city is doing its part to make sure Cullman is on the Alabama mural map.

“Through efforts of the Cullman Historical Society and contributions from the City of Cullman, many of the old painted signs have been refurbished and have become pieces of art with a link to our history,” Eller said, adding that murals also give a nice boost to city tourism in that they encourage visitors to explore the area — and maybe take a “selfie,” or two, when they spot a colorful patch of wall.

With many murals already dotting the downtown area and beyond, the Mural Trail will certainly have enough material to work with when it comes to spotlighting the city of Cullman.

A Peek Behind the Paint

Behind every painted train, sprawling landscape and larger-than-life angel wing, there’s an artist who mapped out the massive painting first in their mind, then picked up a paintbrush and brought it to life. A big part of the Mural Trail, Johnson said, will be giving credit to the artists and entities responsible for the murals.

“It feels wonderful to capture something on paper or canvas and then bring something to life,” said Bethany Kerr, the artist responsible for the “Welcome to Cullman” mural on Newman’s Cleaners building. “There is a satisfaction there that I can’t really seem to find in anything else.”

Kerr teamed up with the Cullman County Historical Society in 2010 to bring a splash of color to the city. After approaching the county commission and sharing her vision to make Cullman a little more colorful, Kerr learned that the city was already engaged in a historical mural project. The timing couldn’t have been more perfect — except for one small caveat.

“By the time they had approved the mural project, I was 8 months pregnant,” Kerr said. “But I felt like I couldn’t pass up such an amazing opportunity, so I painted both while in my third trimester.”

“There is a personal touch and a history created with each mural,” Kerr said. “Murals give communities a strong sense of identity, and I think they are something to be proud of and can be enjoyed for decades and even centuries if done well.”

As the Alabama Mural Trail continues to grow and evolve, Johnson said she hopes by the end, Alabama and its 67 counties will have a list of artwork that communities, artists and visitors can be proud of. Because art can be found almost anywhere, she encourages folks to keep a keen eye out for a little bit of art in their neighborhood. No matter how small or large, she said, each splash of color tells a story.

“We want anything that might be a mural to get on the list because public art can cross so many boundaries,” she said. “Social boundaries, economic boundaries, even language barriers. We want every community to have the opportunity to be highlighted.”

To learn more about the Alabama Mural Trail and to submit a mural, visit www.uaced.ua.edu/mural.html.

This story first appeared in the 2019 Winter Cullman Magazine.

FAIRVIEW— Pizza Done Right in Fairview took advantage of the COVID-19 shutdown to clean and paint inside the building. But that got manager Latonia Burden and owner Cindy Reid thinking. What about outside the building?