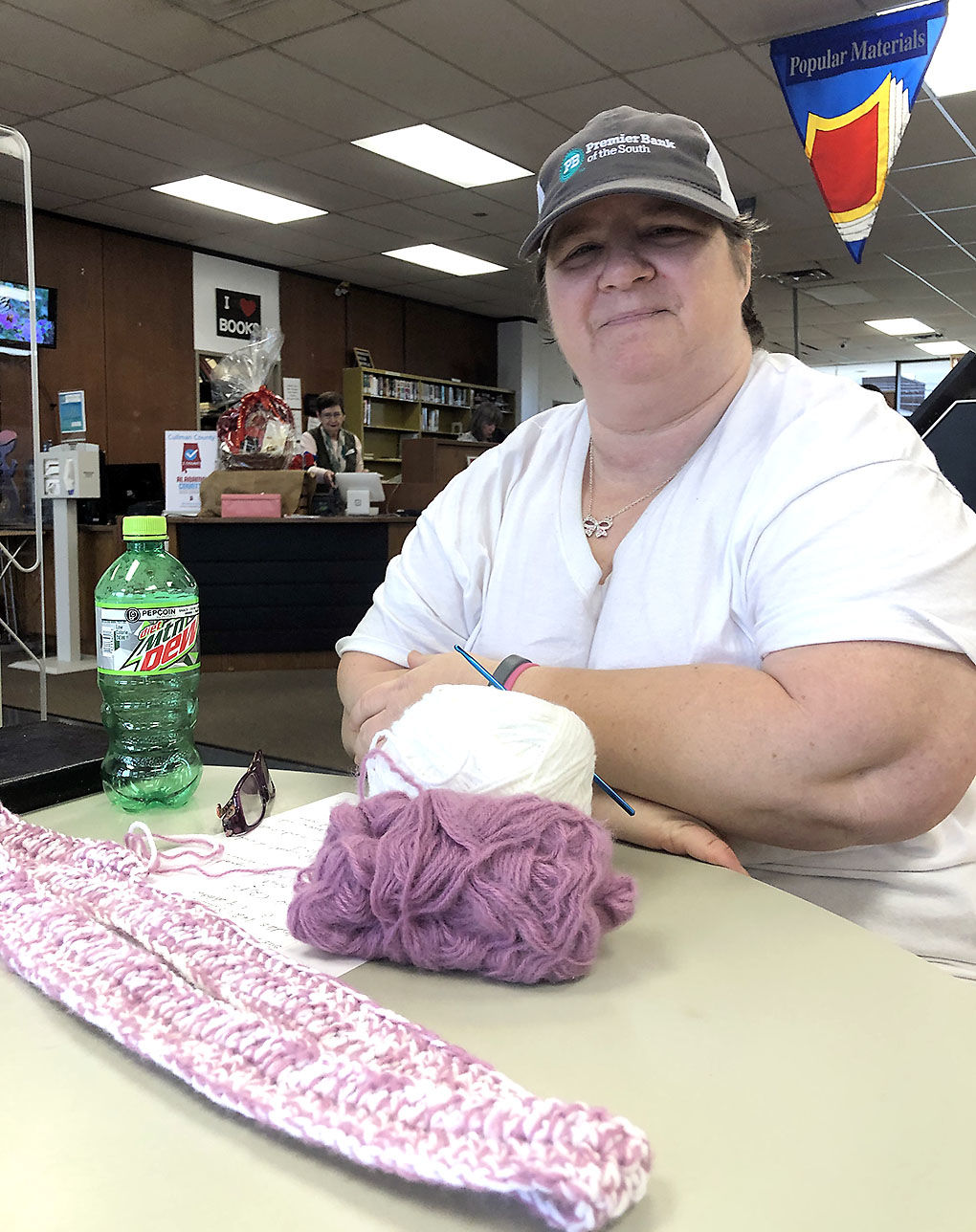 Regina Johnson, one of the Knifty Knitters at the Cullman library, is crocheting a scarf. The group meets every Tuesday afternoon to make items they donate and to teach others how to knit and crochet. 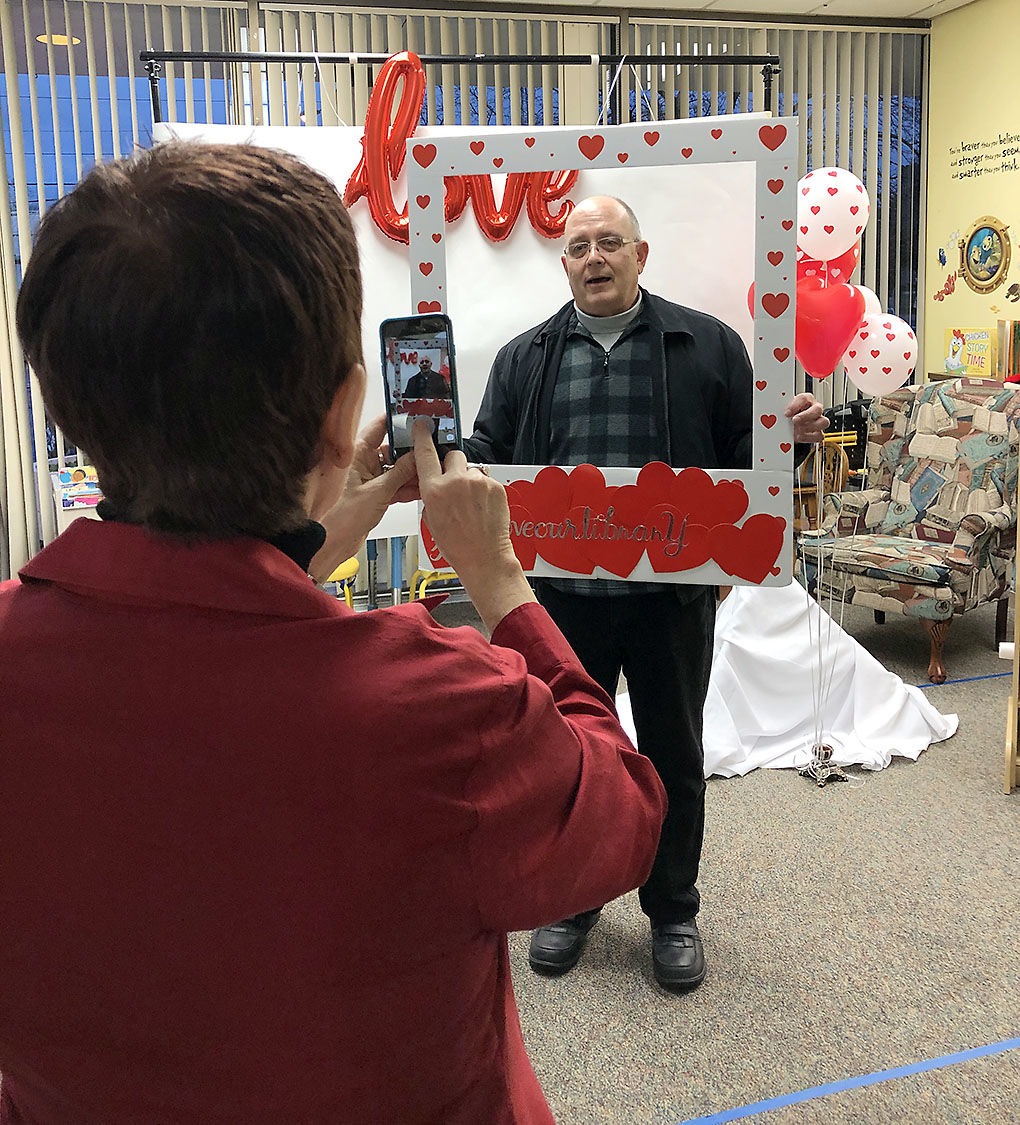 Friends of the Libraries of Cullman County board member Renee Welsh records Drew Green sharing why he loves libraries at a recent fundraiser for the Cullman County library. 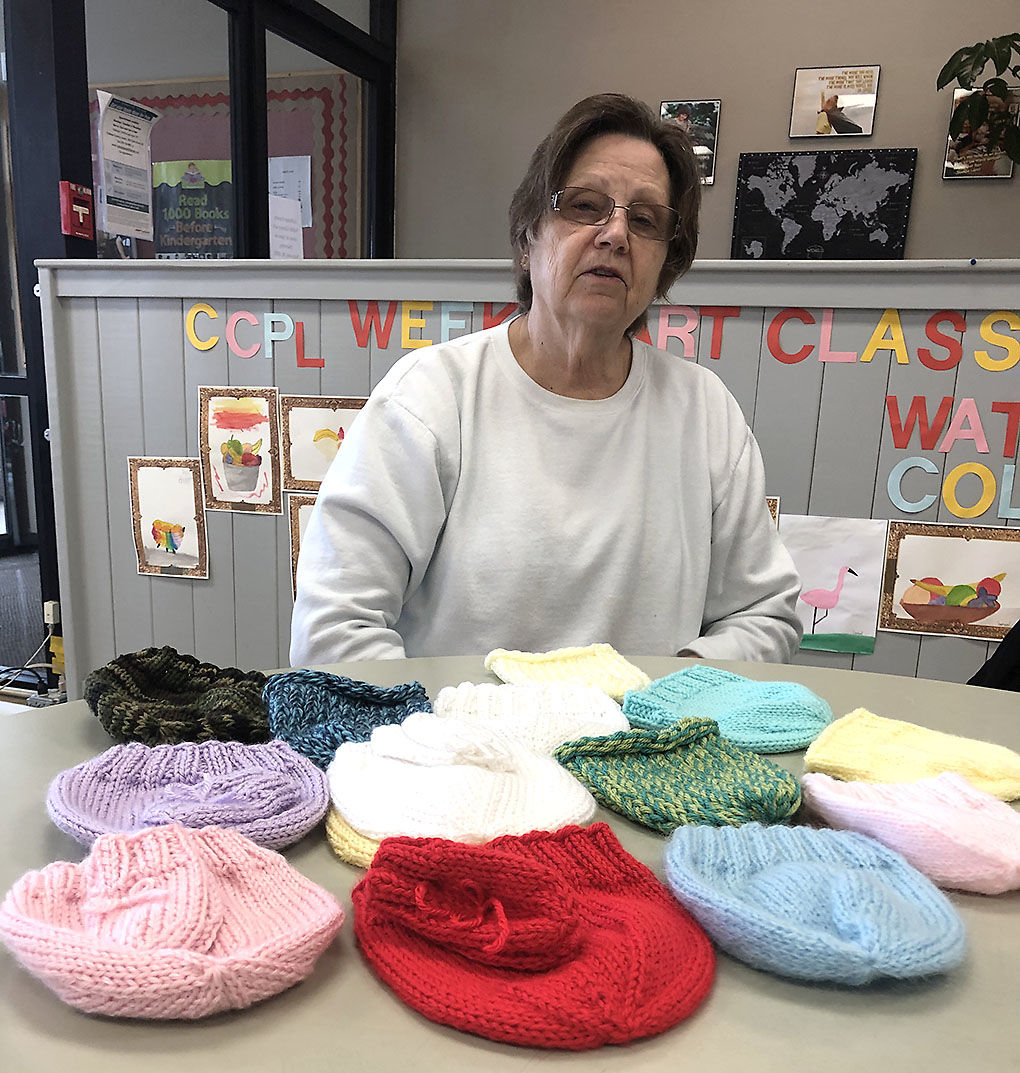 Regina Johnson, one of the Knifty Knitters at the Cullman library, is crocheting a scarf. The group meets every Tuesday afternoon to make items they donate and to teach others how to knit and crochet.

Friends of the Libraries of Cullman County board member Renee Welsh records Drew Green sharing why he loves libraries at a recent fundraiser for the Cullman County library.

Despite being deep into the technical and digital age, libraries - which date back to colonial times in American history - are still going strong.

According to a recent Gallup poll, more people went to libraries last year than they did movies, amusement parks, live sporting events or museums and national parks. The survey found that adults’ visits to the library averaged 10.5 times per year, compared to 5.3 times they went to movies or 4.7 times they attended a live sporting event.

This does not come as a surprise to Cullman County Library Director Sharon Townson. The Cullman County Library system has nearly 32,000 card holders, a remarkable number in a county with a population of around 82,000. “We’re well supported by the community,” said Townson. In the last year, the library had 97,491 visits from patrons coming for books, story time, internet access or just to hang out and study.

“The face of the library has changed, and we’re changing with the times,” said Townson.

The library provides free notary service, online tutoring and online access to the Chilton Auto Repair Manuals. Patrons can also check out Wi-fi hotspots for two-week periods. Townson said the hotspots are great to use on road trips to maintain internet access and for people who may not have internet access in their homes and for kids doing homework online. “It’s really meeting a need,” she said. The library’s two Wi-fi hotspots have been in such demand there’s a waiting list, so they recently purchased six more.

People come to the library to learn knitting and crocheting, take yoga classes or, during tax season, to get help with their taxes.

Janice Calvert of Cullman was one of the people getting free tax assistance at the library this week. “When my husband was alive, we paid over $200 to get our taxes done,” she said. Now legally blind due to macular degeneration, Calvert has been using the AARP-provided tax services for several years. The Cullman County Library began offering the service last year. Assistance is available on Monday, Tuesday and Thursday, from 9 a.m. to 3 p.m. until April 14.

This year was the first time Calvert came to the Cullman library for the service. “It’s real easy,” she said. “They’re so nice to help me fill the paperwork out.”

Kaye Walker is one of the six volunteers who assist people with their taxes. Although the service is offered through AARP, it’s not limited to AARP members and is available to taxpayers of any age. The volunteers are certified through the IRS to help with simple tax returns. Walker, who has been volunteering with the AARP program for 10 year said they did 65 tax returns at the library last year when it was only offered one day a week, but this year “we’re booked out” thanks to word of mouth and publicity from the library.

“Our clients are just great,” she said. “They really appreciate the service.”

Out in the front room of the library, a group of women knit and crochet baby hats, mittens and scarves, among other items. Vera Falkner and Regina Johnson are among the six to 10 “Knifty Knitters” who meet at the library from 12:30 - 3 p.m. on Tuesdays. Both began knitting as teenagers, and use their skills to make hats for newborns, cancer patients and the homeless. “It feels good to help out,” said Johnson.

Newcomers are welcome, as the group also provides instruction and support. Faulkner said yarn and needles have been donated to the library, so people wanting to learn don’t even have to worry about bringing their own supplies.

Throughout the week, library patrons are coming for story times (Mondays and Tuesdays), to check out and return books and to use the library’s internet. The main branch has 16 computers, and there are 43 available system-wide. Last year, there were 21,574 logins to library computers.

“We have tons of people who come in to put in applications, or they come in to do their resumes,” said Townson. Truck drivers, too, make up the library clientele. She said they come in to login and look for jobs and also to check out and return audio books on CDs.

“I think it’s great; they’re on the road and listening to books,” she said. Library card holders can also use Camilla.net to borrow e-books and audio books for free as well.

The stereotype of the quiet library is gone now, too. While screaming is definitely discouraged, the volume inside has been turned up with groups of kids and study groups meeting. The library attracts lots of tutors, Townson said, and for those who need quiet, there are two quiet areas.

Coffee is also available, and although the library does suggest a small donation to help cover the cost, it’s not required. Townson said that while food and drinks are welcome inside the library, they do ask that people keep a lid on beverages while using the computers.

The programs at the library are sponsored by the Friends of the Public Libraries of Cullman County, a non-profit group that supports the programs and services. The Friends group was formed many years ago, but the group went dormant in the late 1990s. Last May, they reinstated their non-profit status and have been busy ever since providing programs, drank writing and fundraising for the library.

In 2019 they sponsored an Oktoberfest event that drew about 70 people to the library, and the Grinch party at Christmas was a full house. This year, they are planning a Storypalooza on March 7, a Mother’s Day fundraiser and summer reading programs, along with the Oktoberfest and Grinch parties. In addition, the Friends have partnered with Panda Express where once a month, customers can use a code when ordering and the library will receive 20 percent of the proceeds. Panda Express was also a partner this year in the library’s Chinese New Year celebration.

Friends of the Library president Tanya Allcorn said the mission of the group is simple: “We’re here to support the library, but mostly we want to be the face of the library.”

“They have been amazing,” said Townson.

The Friends of the Public Libraries of Cullman County have a Facebook page where people can see upcoming events and share their stories of why they love the library.

Margaret Floyd Stallings, 84, of Cullman passed away April 2, 2020 at her residence. Services will be announced at a later date. Cullman Funeral Home is in charge of the arrangements. Ms. Stallings was born April 3, 1935 to Emory Talmadge and Delphia Brennis White Floyd. She was preceded in …