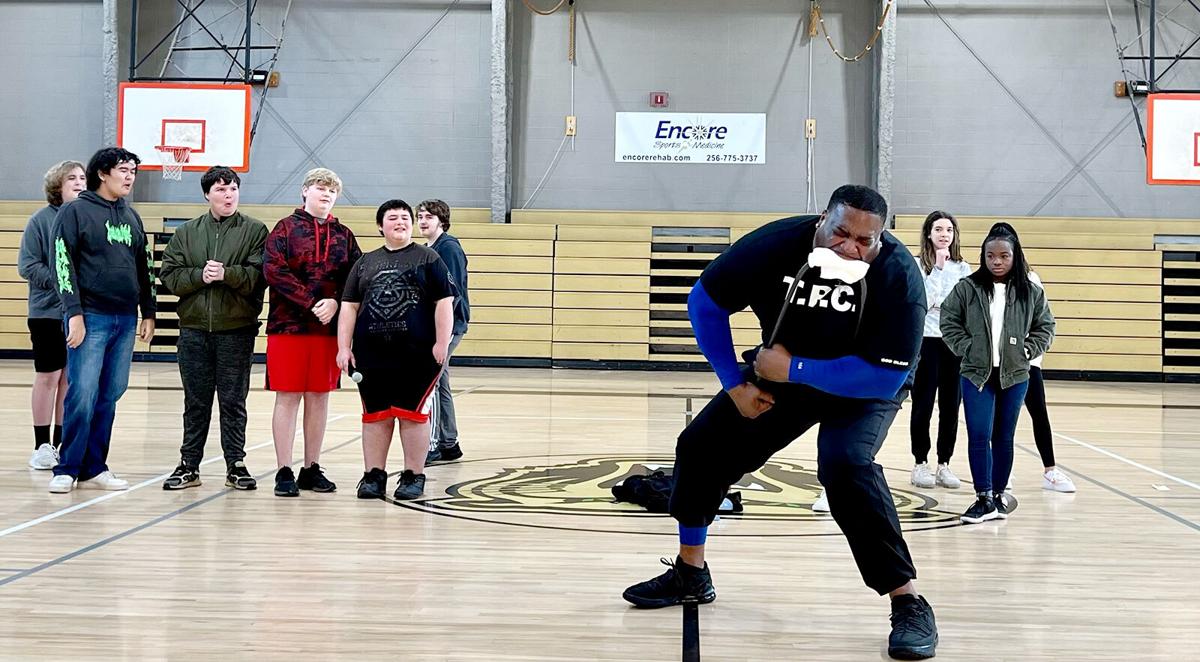 Former NFL player Devin Wyman performs an of strength by bending a bar with this mouth and arms. The current motivational speaker is spending two weeks in Cullman City Schools meeting with students to discuss leadership and inclusion. Read more on Page 2. 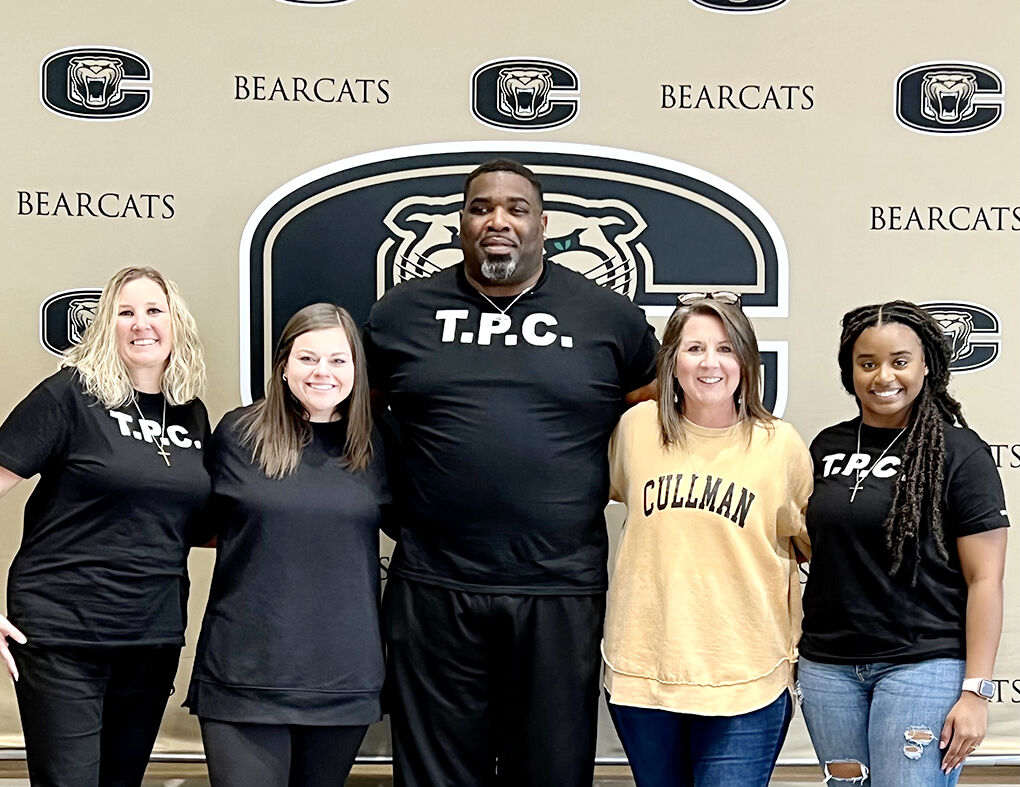 Former NFL player Devin Wyman performs an of strength by bending a bar with this mouth and arms. The current motivational speaker is spending two weeks in Cullman City Schools meeting with students to discuss leadership and inclusion. Read more on Page 2.

Cullman City Schools is in the midst of a two-week rollout of inclusiveness, communication and anti-bullying training for staff and students under the guidance of Devin Wyman, a former NFL player and current motivational speaker and mentor.

“We are excited to get Devin Wyman and his team in our school system as quickly as we did. Kudos to Cullman High School Principal Kim Hall, who initiated the contact with him and put together a full two-week itinerary,” Superintendent Kyle Kallhoff said in a statement. “I appreciate the school board’s role, approval and swift actions in making this happen as well. Mr. Wyman has experiences and expertise in an area where we have an opportunity to grow. I look forward to seeing the results of the time and dialogue he has with our adolescent students; specifically the student leadership teams with which he is working.”

The sessions were first announced by Kallhoff at the December 15, 2021 city school board meeting. Several parents had been pushing the board to address a racist video that surfaced in late 2021. The video, recorded off-campus, features a student saying “Kill the n****” and “White Power” multiple times.

Jocelyn Logan, who said she is the mother of one of only a handful of Black students, faculty and staff in the system, asked the board’s members to put themselves in her shoes and ask themselves how they would feel if someone made a video shouting to kill all the redheads, marching band members or board members.

“At that point, you would take this threat very personally as my family has,” she said during public comments after the sessions were announced.

At a Nov. 16, 2021 meeting, a group of parents attempted to discuss their concerns over how the incident had been handled by the system, but they were not allowed to due to not being on the agenda to address the board.

Wyman has been leading the sessions with teachers and administrators, as well as larger student assemblies with students at Cullman High School and Cullman Middle School this past week. School officials say he’ll continue meeting with smaller groups of students this week, digging deeper into the topics of leadership, inclusiveness and communication.

“We’re talking to kids about making the right choices with the right voices, starting with that as a foundation. When you get the opportunity to speak into people’s lives, build them up with character, integrity and a foundation of kindness,” Wyman, who is Black, said. “It starts with 1,000 students, then you take 10 percent of that and it gives you 100. Then take 10 percent of the 100, and that’s 10 people. That’s 1 percent. Start with 1 percent. Start with building a room of diverse leaders who can sit and communicate, and it grows from there. It’s a life skill to be able to communicate, and to do it with a foundation of kindness.”

Wyman notes that can start with something as simple as having conversations with your peers or teachers, learning to see people as individuals and learning to connect with them about their differences and shared interests.

“We’ll do some games together, and they’ll find out someone was born in Denver, or Cullman, or Mexico — just things about their classmates they never knew because they’d never asked,” Wyman said. “I told the students, you have an architect who built this building, I’m an architect for building people. That’s what I do. I asked them what does that look like? It’s about empowering someone, speaking life into someone. That’s what we’re working on. To learn to communicate, to forgive and grow.”

Cullman High School Principal Kim Hall noted the last few years of social distancing, virtual learning and general disruptions caused by the COVID-19 pandemic can take a toll on students — and these two weeks of sessions with Wyman and the lessons being learned mark a creative way to help reestablish some of the social and communal connections that may have been lost along the way.

“We just knew that for young people in this critical time in their lives for adolescent development, isolation can be a major obstacle,” Hall said. “We’re making a concerted effort to look at how we can communicate better, and how we’ve become dependent on digital devices and technology. So we’re trying to develop our young people so they’re ready to communicate, to look people in the eye, and have a conversation. To connect and be kind, and share their stories.”

Cullman Middle School Principal Jake Johnson said Wyman has had an amazing impact on his students this month, passing on life lessons and inspiring stories that have resonated with students as they rethink the ways they interact with one another.

“We have enjoyed having Devin speak to our students and faculty,” Johnson said. “He has illustrated the importance of loving others. Despite our perceived differences, we should all strive to be kind to others because we never know what they are going through away from school.”

Looking ahead, Wyman said the lessons students are learning during this period are things they can take with them for the rest of their lives.

“I’m here for two weeks but this doesn’t end. This continues throughout the school year, and the following school year. It’s been so great to just see these students opening up and being so receptive. That’s what we need, what we want. To see them being willing to communicate,” Wyman said. “As an ex-NFL player it’s about ‘Are guys buying in to what coach is providing?’ That’s how you win Super Bowls. To be successful you have to buy in, and that’s what we’ve seen here in Cullman. Students are buying in to the ideas of kindness and character and communication and connection.”

The hope is that the lessons students learn during this period will inspire them to be the next generation of leaders in Cullman City School and the community at large.

“We just want to cultivate that within them,” Hall added. “There’s so much potential for them.”

Michael R. Evans, age 70, of Cullman, Alabama passed away on Tuesday, January 25, 2022. Michael was born March 28, 1951 in Birmingham, Alabama to Ruben and Catherine Basinger Evans. He was preceded in death by his parents, granddaughter, Kamryn Greer Chamblee. Mr. Evans worked for and retire…