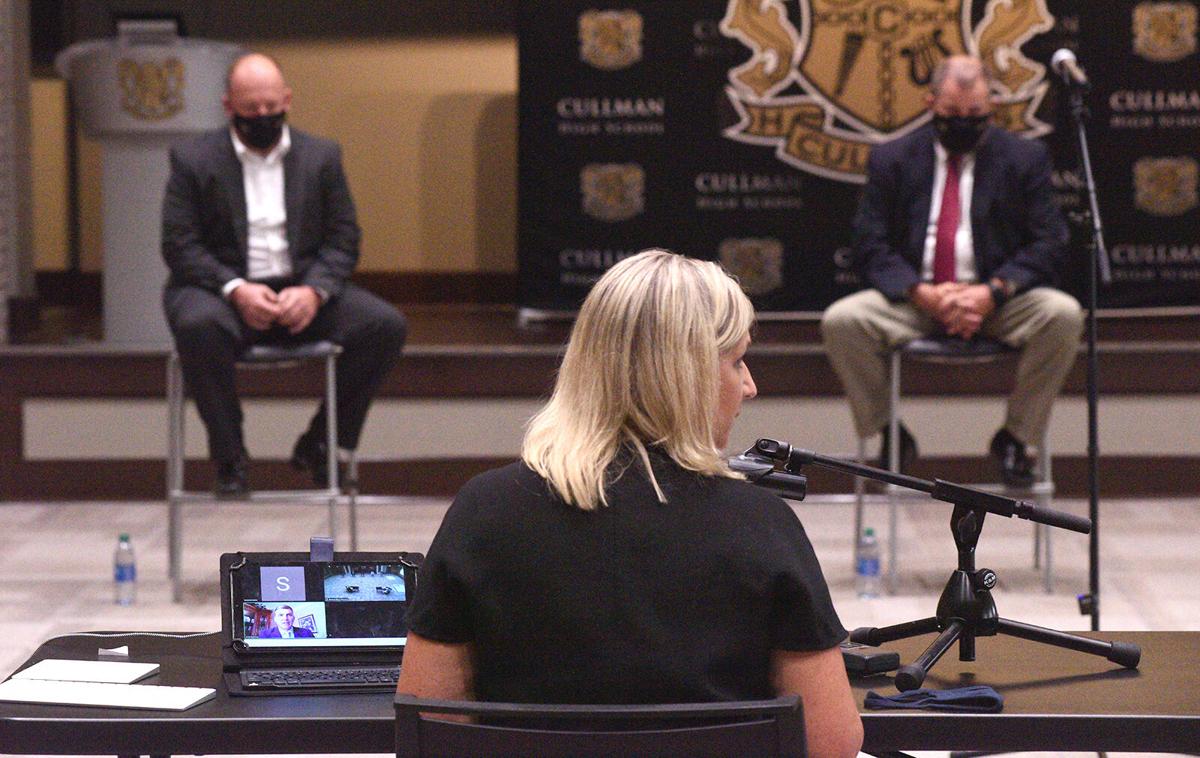 Cullman City Schools board member Suzanne Harbin prepares to ask a question during Wednesday evening’s school board candidate’s forum. Harbin is not seeking reelection. Candidate Scott Sessions, seen on the laptop at Harbin’s left, participated by Zoom from self-quarantine after a family member’s possible exposure to the coronavirus. 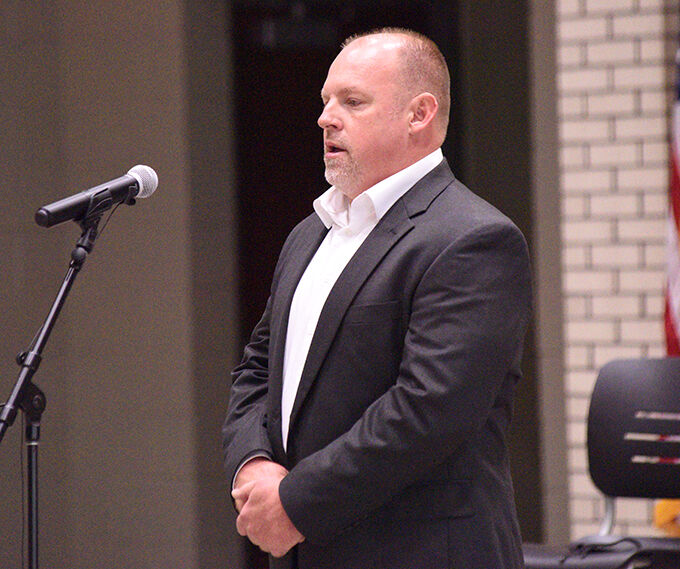 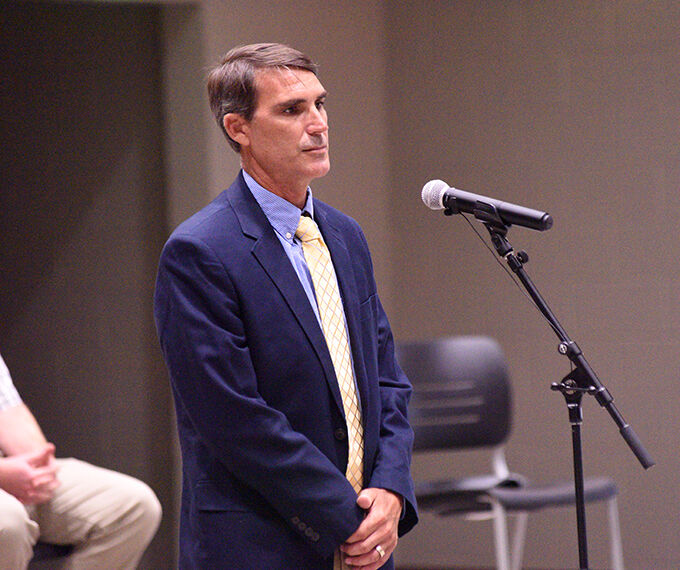 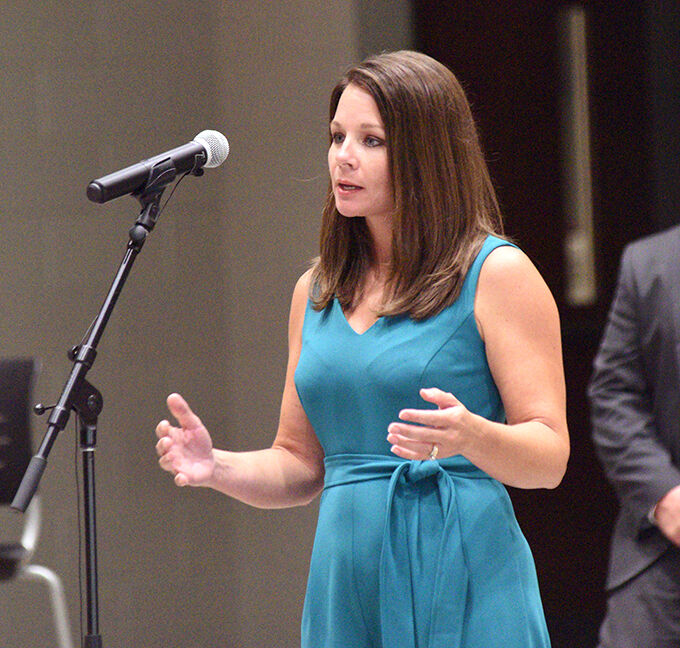 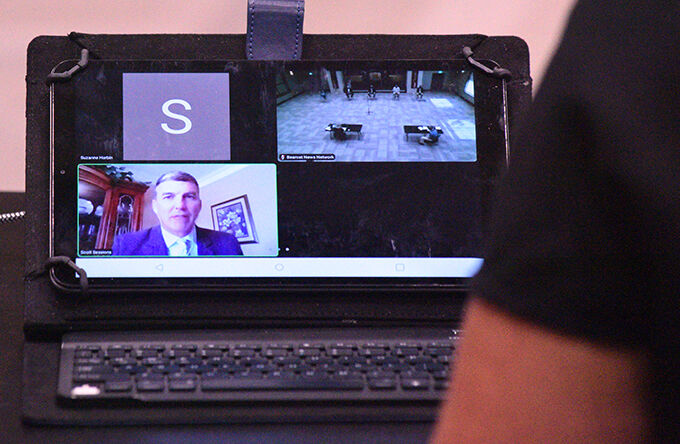 Scott Sessions appeared at the forum via Zoom. 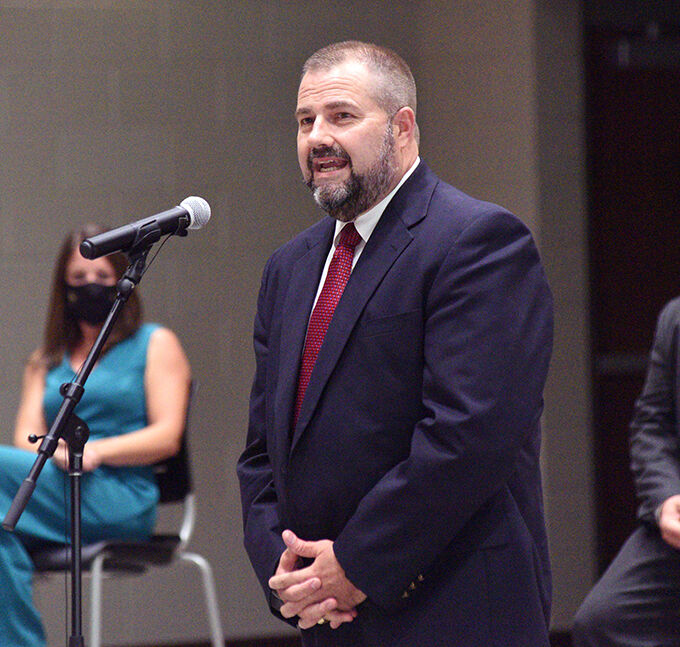 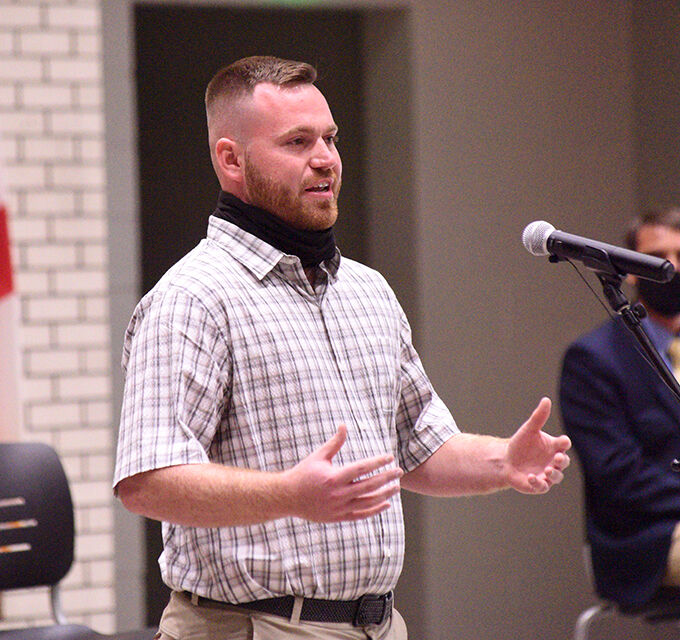 Three of the five seats on the Cullman City School Board are up for grabs on Aug. 25, and the candidates for those positions were able to answer questions and share some of their goals during a forum Wednesday hosted by the Cullman Area Chamber of Commerce.

Seats 2, 3 and 4 are all up for election. Incumbent Chris Branham will face Nick Dumas for Place 2, Cheryl Harrison and Scott Sessions are running for Place 3 and incumbent Jason Neal is being challenged by Nathan Haynes for Place 4.

Every candidate was able to speak at the forum, including Sessions who attended virtually out of caution due to a self-quarantine after a family member’s possible exposure to the coronavirus.

To open, each spoke about their reasons for running and what makes them qualified to serve.

Sessions said he has a lot of stake in the city school system, with four children who are all enrolled in the system and his wife who teaches special education at West Elementary School.

“I just feel like I bring some value to the school board,” he said.

As a pastor for more than 20 years, Sessions said he has experience with budgeting and his previous experience in retail, manufacturing and teaching will all factor in to his work on the board if elected.

“I provide a variety of experiences in life and a perspective that I hope to bring to the school board to make it even better than it is today,” he said.

Harrison said she is running because she has a passion for the people of Cullman and the students in the system.

“I want to make a difference,” she said. “I want to unify, not divide.”

She said her profession as an interior designer requires teamwork, communication and the ability to have a vision.

“Not just a vision, but being able to take that vision and break that down into action,” she said. “Those are some of the things that I think would be a great addition to the men and women that serve on this board, and I would love to have that opportunity.”

Branham said he first ran four years ago with the goal of giving back to the community, and the board has been working since that time to address the need for additional facilities for the growing student population.

“We realized that we are in need for facilities, and we have been working for the last 3.5 years on that facilities plan, and my goal for the next four years is to roll that out and act on that,” he said.

Neal said he is running for reelection to continue to represent and serve the community.

“I think that’s one of the most important things that a school board member must have, I think you have to want to serve the children, the faculty and the community in that order,” he said.

Neal said he has a heart to help people.

“I want to continue to serve, and I’m able to bring leadership and experience that I believe this board will need in the next four years,” he said.

Haynes said he is running because he wants to see better representation between all of the city’s schools.

“I feel like we need to have better communication between the administration, the teachers, the community,” he said.

The local business owner said as a 2016 high school graduate, he has the most recent experience in the classroom.

“I’ve been in school with all this technology, I know how all of that works,” he said.

Dumas said he wants to make the city’s schools better that they already are.

“I believe that we can make it better, and that is my goal,” he said.

“Between my educational background and my business side, as far as budgeting and everything together that goes into running a business, I feel like that makes me a qualified candidate,” he said.

With Cullman continuing to see growth and the city’s current schools beginning to see the strain from that growth, the candidates were asked how they would work with the city government to address the issue and whether they would support a sales or property tax increase to pay for new facilities.

Branham said he would not be in favor of more taxes, and believes the school system and city can find the funding in their existing budgets.

“I believe there are ways that we can find to help pay for a new facilities plan if we put our heads together and work,” he said.

He said the system is already working on a facility plan, and money shouldn’t come into play until those plans are more finalized and have a better cost estimate.

“I believe that you grab the plan first and agree on what needs to be done, and then we can figure out how to pay for it,” he said.

Neal said he would not want to raise taxes on the city during the middle of a pandemic, and it will take the city and school board spending a lot of time working together to implement the board’s current facility plan.

“I believe that we have resources that are there, whether it’s alcohol money, whether it’s future tax increases, that we can work together with the city council and create a plan over the next 10 or 15 years and build the school like we need to,” he said.

Haynes said he also opposed a tax increase, and he believes the money for facilities can be found in the system’s budget.

“I feel like we should tighten our belt, cut useless spending and dig down deep in the budget,” he said. “We’ll find it there that way.”

Dumas said he was against the raising of any taxes, and believes the citizens of Cullman would vote against a tax increase if it was up to them.

He said an increase in state funding meant that the school system — which had to pay for 21 teacher units out of local funding in 2016 — saw that number decreasing to six local units in 2019, which represents around $1 million in extra funding alone.

There are other ways to reduce spending in the system that may require some tough cuts, but the board needs to prioritize what the schools really need, Dumas said.

“I think if the city wants to give us more money, then that would be great also,” he said. “I think we need to communicate with them and work with them, but I think we need to get our own budget in order first before we go ask for any help.”

Sessions said the system could be more frugal with its spending, as there have been large increases in administrative, classroom and maintenance costs in recent years.

“I think we can really go through the budget with a fine-tooth comb and find ways that we can tighten our own belt,” he said. “We can be very creative and not have to raise taxes.”

Harrison said she would want to have a chance to pore over the budget and see where money is currently being spent before supporting any additional taxes.

“I think that takes a little bit of learning and being able to really see where that stands,” she said. “So I wouldn’t feel comfortable going to the public and asking for a tax until we really had all the ducks in a row and found out the best route to go.”

She said she does believe in being on the same team with the city council and wants to be sure to keep open communication with its members, and has heard from the council and mayoral candidates about how important the city’s schools are to them.

“I think that puts us in a really good place,” she said. “I think they understand the growth that’s happening here, and to keep our schools top-notch, we’re going to have to make those investments.”

Candidates were also asked to use their imaginations for one question, as they were asked what they would do with a hypothetical $1 million grant that was able to be used for anything that would benefit the system.

Haynes said he would want the money to go towards repairs and maintenance for the system’s schools to get them back up standards.

“They’re not safe,” he said. “If they need the maintenance, that’s what I would be spending that money on is repairs.”

Dumas said he would like the money to go into something that would directly benefit the students, and said technology upgrades would be a likely target.

“Technology’s always changing, so you’re going to have to keep spending money on that, so to get that latest technology or whatever that is right now, I would spend that money on that, use that for the kids,” he said.

Sessions said the greatest need for the system is school safety, and he would want to use $1 million to upgrade schools with new cameras, alarms and sprinklers. There is also a need for instructional assistants to help take some of the work load off teachers, he said.

“A million dollars would go a long way toward every grade in every school having an instructional assistant,” he said.

Harrison said she has been sitting down with all of the system’s administrators to discuss their challenges and needs, and she would want to continue that communication to determine the best use for the grant.

“I would really hope that we could sit down and have a conversation with our administrators and our superintendent and find the best needs for that money, to divide it, and to address the immediate needs that would help each school system to see success,” she said.

Branham said one need that he can see in the system is a need for one or two new school buses.

“That wouldn’t cost $1 million, but it would be a chunk of change there, so if we could save the rest of that money and put that in reserve for a need down the road, I think that would be what was best for our system,” he said.

Neal said the grant would be best spent on new programs for children who need special attention, such as those with dyslexia or autism, which the system is always trying to find funding for, as well as some additional safety upgrades across the system.

“I think we would start there to try to fund them, and we could fund them for a long time, maybe a whole year at a time or two years at a time,” he said.