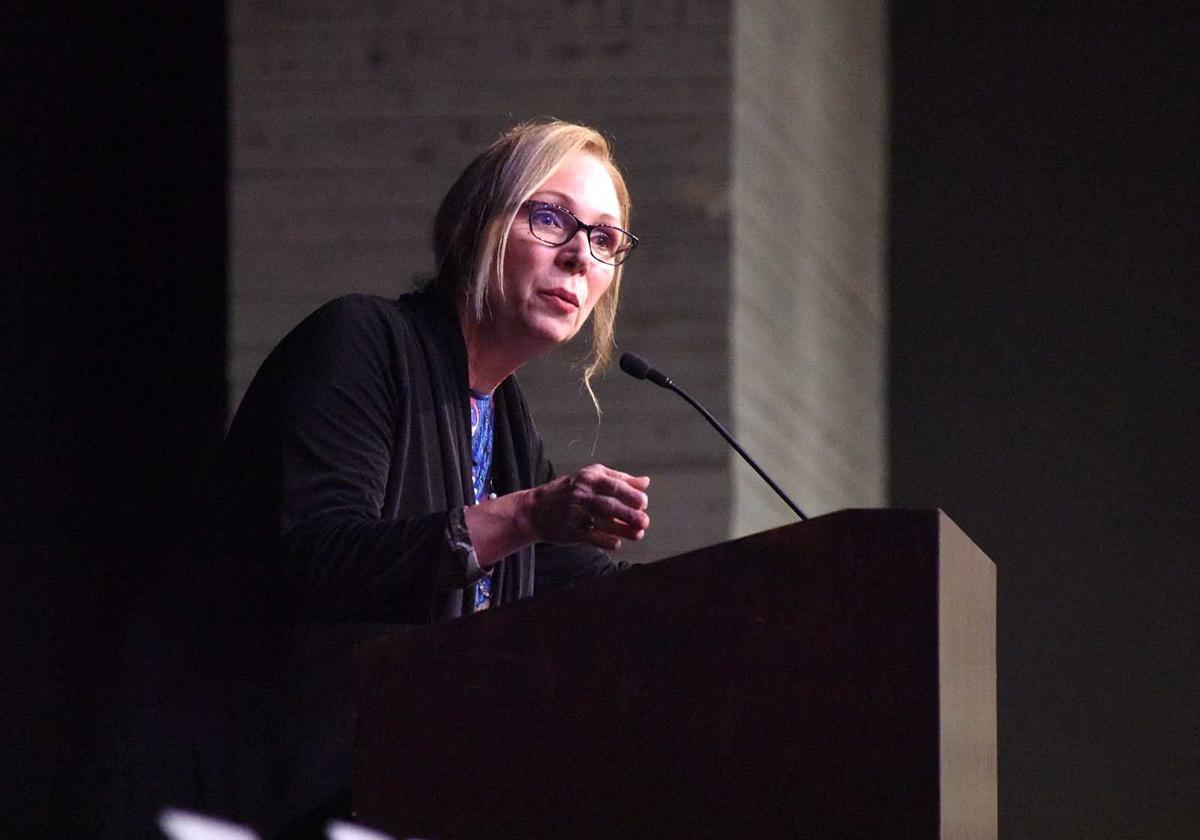 Maria Steele talks about her son Bryan’s long battle with substance abuse that ultimately led to his death. 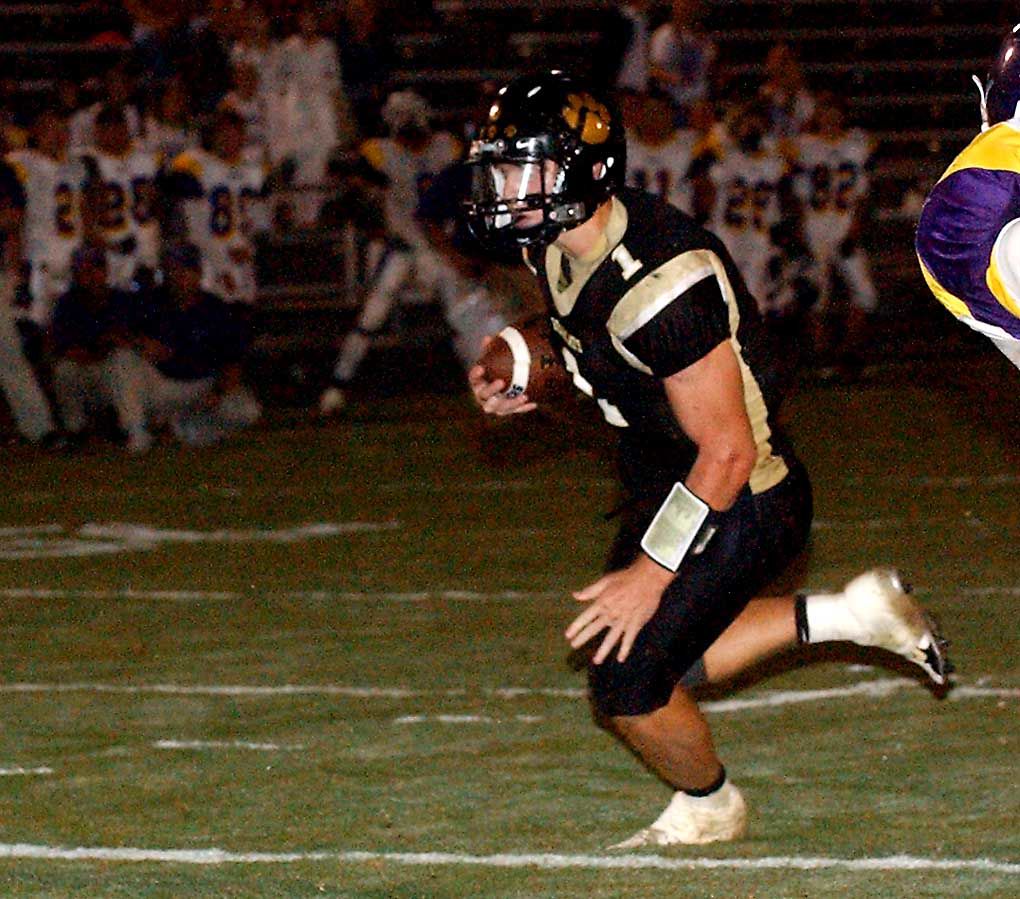 Bryan Steele scores a touchdown for the Cullman Bearcats in this 2008 Times file photo. 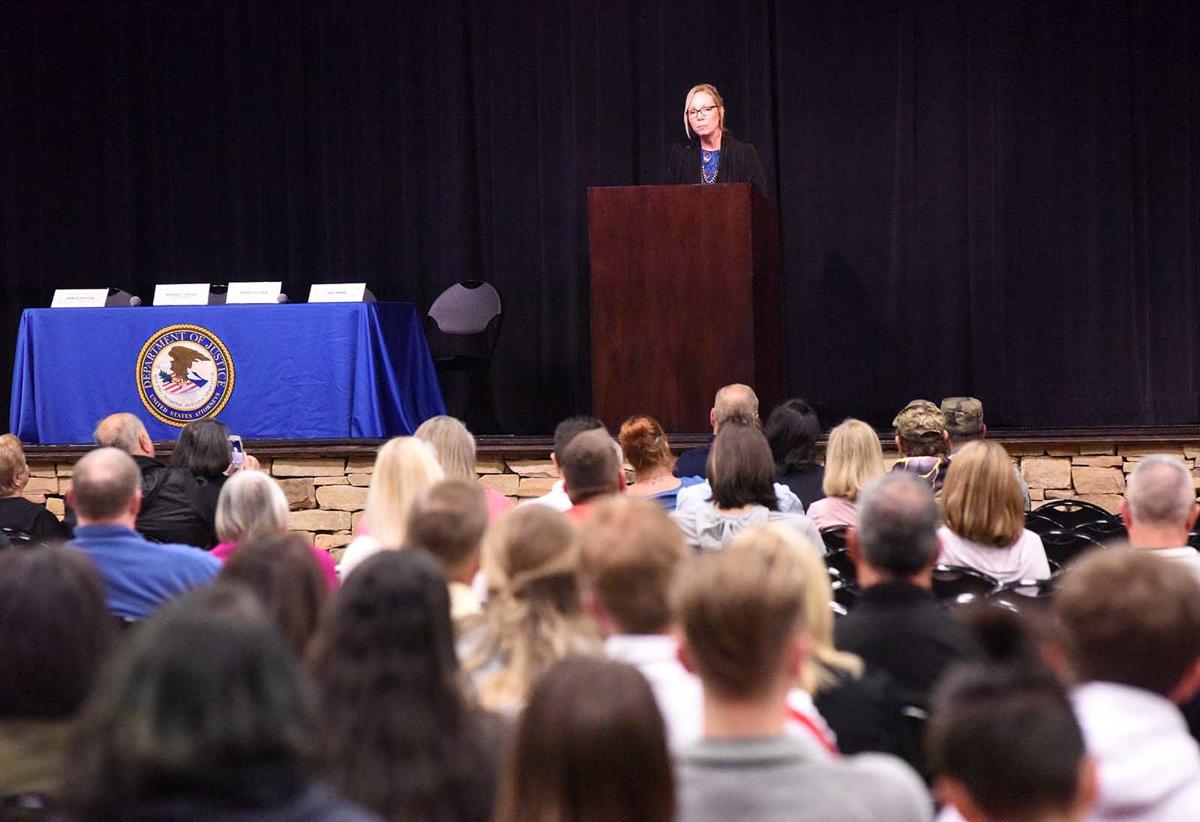 Maria Steele talks to those attending Cullman Civic Center about her son Bryan’s long battle with substance abuse that ultimately led to his death.

Maria Steele talks about her son Bryan’s long battle with substance abuse that ultimately led to his death.

Bryan Steele scores a touchdown for the Cullman Bearcats in this 2008 Times file photo.

Maria Steele talks to those attending Cullman Civic Center about her son Bryan’s long battle with substance abuse that ultimately led to his death.

The opioid crisis has been the cause of numerous deaths in Cullman County and the rest of the nation, and local officials held a town hall meeting at the Cullman Civic Center Tuesday night to address the crisis in the community.

The town hall featured a guest speaker who has a personal connection to the crisis, as well as a panel that discussed the issue further and answered questions from the audience.

Guest speaker Maria Steele, a Psychiatric Emergency Nurse Consultant at UAB and part-time lecturer in UAH’s nursing school, spoke to the audience about her son, Bryan, and his struggle with addiction that led to his death.

Steele said she tells her story to her students as a way to help reduce the stigma that surrounds addiction and to help them understand the underlying causes of addiction and see their patients as individuals.

“Everybody knows that children don’t grow up to want to be addicts,” she said.

Steele spoke about Bryan’s life and how he excelled at football and had a dream of one day becoming a coach.

“He was very well liked,” she said. “He was pretty much exceptional at every sport that he tried.”

The Steeles lived in Mississippi for Bryan’s early life, but moved to Cullman after Hurricane Katrina destroyed their home in 2005.

While living in Cullman, Bryan began having trouble with his grades. His family found out that he was using marijuana. Steele said they began drug testing him after that, and spoke to him about the dangers that can come from drug use.

During this time, Bryan was playing football for Cullman High School, began attending camps around the area, and was being recruited by several colleges in the region. Before Bryan’s senior year, he was slated to the Bearcats’ starting quarterback, but he was found on campus with drugs before the season began leading to his dismissal from the team.

“That was when a lot of the chaos began,” Steele said.

After that, Bryan attended high school in Mississippi and played football there before being homeschooled for his final semester. He went on to play at Northeast Mississippi Community College for two years.

During the final years of his football career, Bryan suffered more injuries and was prescribed more pain medications, and he was later kicked off the team after he was arrested for possession of marijuana.

After that, he returned to Cullman for a time, eventually seeking treatment, but he had a near overdose in the family home in March 2012.

More treatment followed in Memphis, Tenn. He later moved to Kansas to work on a relative’s farm, but he was brought back to Cullman for unresolved legal issues. A trip to another treatment facility in Memphis seemed to work.

Steele said Bryan was a star student at that facility, and was sent to a halfway house after he completed his treatment.

“He called me that morning told me how much he loved it there and how he was looking forward to starting his life, and it was the next day that we got the call,” she said.

Bryan overdosed on opiates and died on his second day at the halfway house.

In a period of 11 months, Bryan attended six treatment facilities, but he was never able to get a handle on his addiction, Steele said.

“Those three or four years was like chasing a runaway train,” Steele said. “We never could get in front of the addiction, it happened just so fast.”

To help make sure other families don’t have a similar story, Steele said the community needs to support families and more talks like Tuesday’s town hall need to be held to help people recognize the symptoms of abuse before it is too late.

“They’re drawing smiley faces or are happy, laughing and playing little league sports, and then the next day something like this comes on and you can’t get your hands over what happened,” she said.

“This is a public health crisis. It is a national crisis,” he said. “It affects all of us.”

These new policies are still new, so their effects aren’t completely visible yet, but they have made an impact already and should continue to do so, Town said.

“It is having an impact,” he said. “I am scared to know where we would be in this country if we hadn’t surged all of the resources and all of the effort into the opioid epidemic.”

Steve "Sleepy" F. Phillips passed away on January, 20 2021. He served 36 years in the Army National Guard in the 20th Special Forces Unit. He served in Operation Desert Shield/Desert Storm, Operation Provide Comfort, Operation Enduring Freedom, and multiple other deployments. He retired as a…