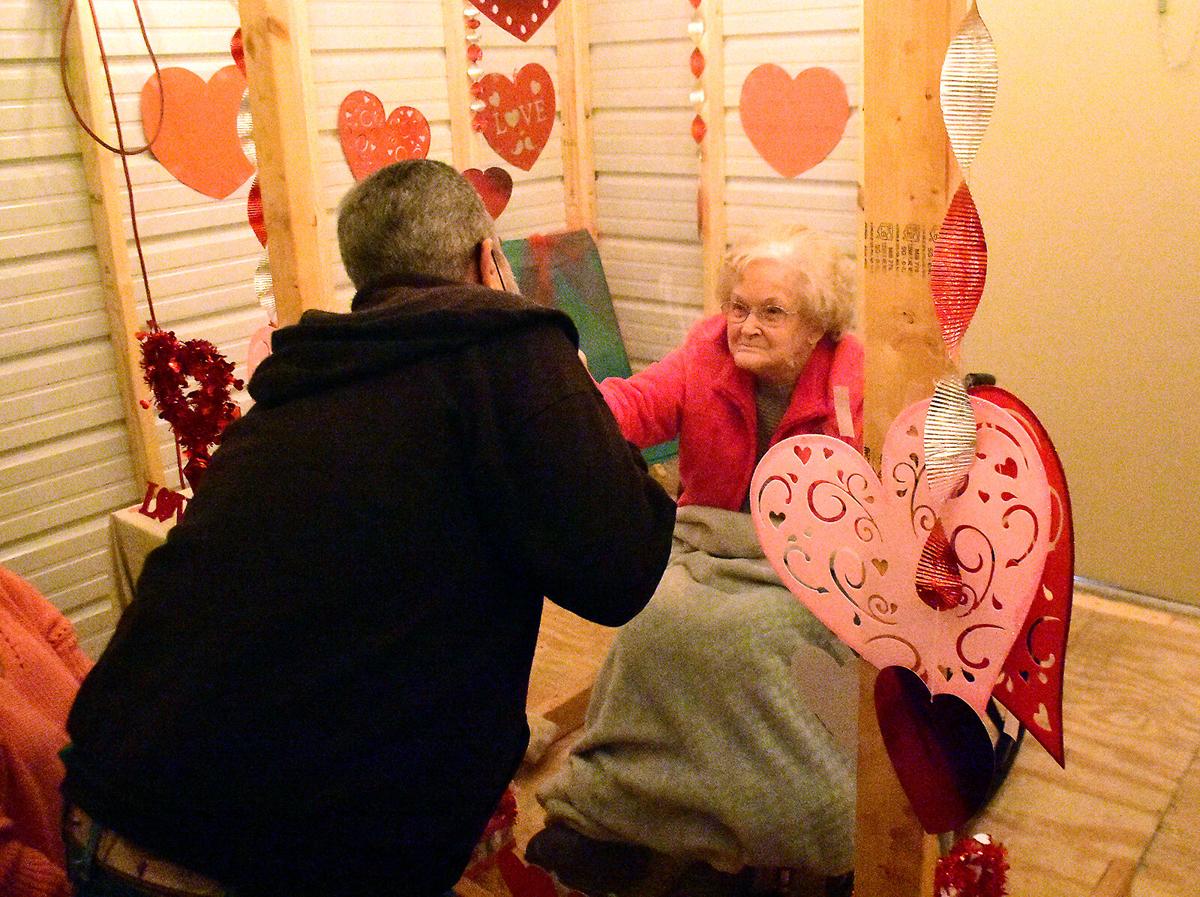 Hanceville Nursing & Rehab resident Kathleen Gregory, separated by plexiglass from son Michael, pretends to tug on his beard during a visit Tuesday afternoon. “She don’t like my beard,” laughed Michael. 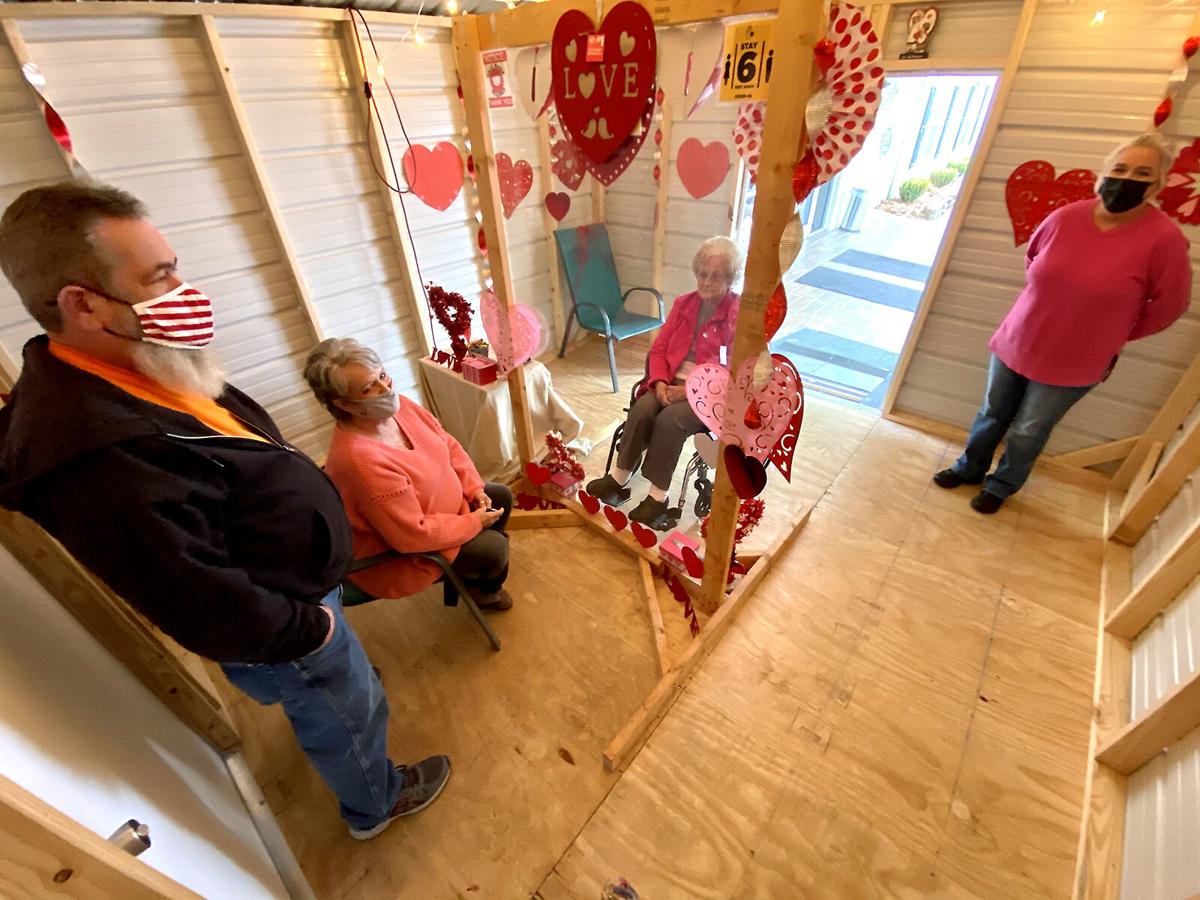 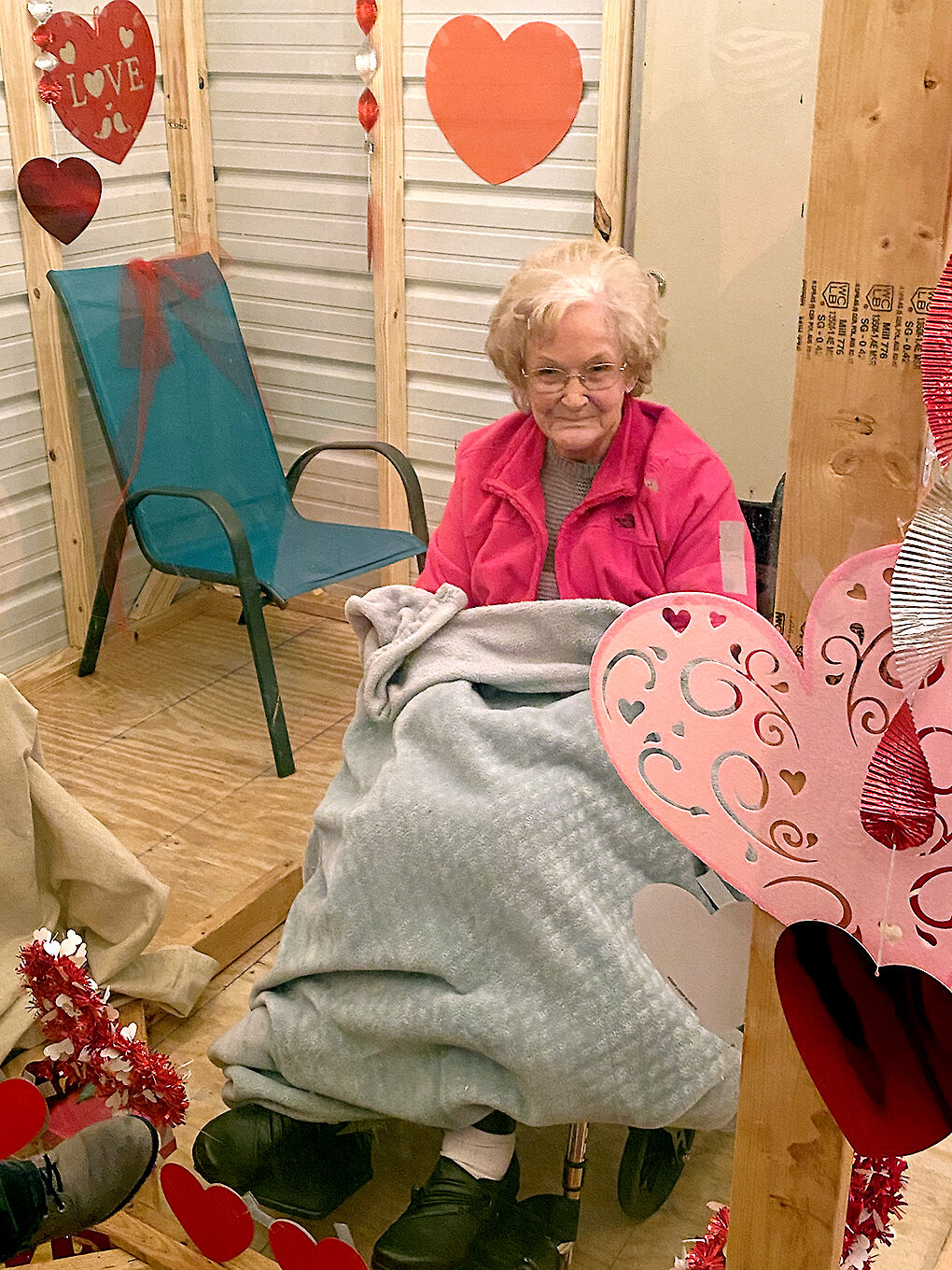 Kathleen Gregory smiles during a visit with her children Tuesday afternoon.

Hanceville Nursing & Rehab resident Kathleen Gregory, separated by plexiglass from son Michael, pretends to tug on his beard during a visit Tuesday afternoon. “She don’t like my beard,” laughed Michael.

Kathleen Gregory smiles during a visit with her children Tuesday afternoon.

Sonny Mullins’ wife, Hilda, has been living at Hanceville Nursing and Rehab for the past two years. When she first moved there, he would visit two to three times a day. Eventually, his doctor told him he was putting too much stress on himself, so he cut it down to once a day.

“I ate supper with her every night,” he said. “We had a good time together and I learned about a lot of people who were there. Some of them are dead and gone now.”

He and Hilda, who worked in the Hanceville High School lunchroom before going to work with her husband at the family’s body shop, have been married for 52 years.

“She would say she loves me and I would tell her I love her,” he said.

Since the pandemic hit, he visits with her outside for 30 minutes at a time and she has an iPad to talk to her family. “She’s actually gotten better,” he said. “She’s been well-taken care of. My wife understand why she can’t come [home] because I can’t take care of her myself.”

Nursing homes, regulated by a number of state and federal agencies, have been on tight visitor restrictions and safety precautions since the coronavirus came to the United States this spring. While intended to protect the people most vulnerable to the disease, it also presents challenges to residents, their families and staff.

“The morale can be affected and it has been,” said Renae Standridge, director of nursing at Hanceville Nursing and Rehab. “We’re wearing two masks every day, getting swabbed twice a week, and then you go out and hear people say, ‘masks don’t work.’”

She said the staff of the 208-bed facility, though, accepts the safety measures they take. “We are the ones who have to protect our residents,” she said.

Unlike other facilities, Standridge said they have not had a shortage of nursing care. “We have not suffered like a lot of people,” she said. “We’ve had temp agencies calling a lot, but we haven’t had to use them.”

Standridge and other nurses credit Administrator Donna Guthrie with taking extra steps to ensure the safety of residents and staff. She purchased state-of-the-art sanitizing equipment, ensured the staff received vaccinations and has provided bonuses and pay increases for health care workers.

“She has worked long, extra hours herself helping us and the residents,” said nurse Stacey Tysinger. “She went far and way beyond what any boss or administrator would do.”

“When the vaccine became available she was proactive and made arrangements to get it to staff and residents as soon as could be done,” said Standridge. “She has said that her first obligation is to protect our precious residents here. We are getting all our staff vaccinated to make this happen unless otherwise advised by their physician.”

Guthrie has also tried to help residents and their families connect. “She bought an outdoor building, heated it and decorated it inside so residents could visit their families and not be in the freezing cold for ‘porch visits.’ She also had several plexiglass and wood screens built for protection,” said Tysinger.

“We see the tears from the residents missing their families and families missing them or losing them,” she said.

Standridge said seeing the separation of families from their loved ones has been the most difficult aspect.

“We try to fill in best as we can for the family,” she said, “but the most important thing to the elderly is their family. We’ve got the added worry about keeping depression from setting in. They’ve been really good to work with us, but there’s only so much you can do.

“There’s just no replacing being able to hold their family. They haven’t been able to hug their loved ones for a long time; that’s more heartbreaking than anything,” she added.

The family takes turns visiting, but they worry about their mom’s mental health.

“In the beginning I think she was depressed,” said Lee.

Munger added, “We thought the more visits the better, but she gets upset when she sees us. But she’d get upset if we didn’t visit too.

“It’s been hard. It’s been tough. We cried, and mama gets upset.”

Lee worries about her mom’s isolation.

“It (restrictions) started in March, and we didn’t get to see her until June. We haven’t touched her since March.” But, she said “As long as we can see her like this, it’s better than nothing at all.”

Guidelines for nursing homes include using the percent of positive cases in the community as a guide for allowing visitors inside the facility. Low risk is considered less than 5 percent. Cullman County’s positivity rate is currently above 13 percent.

Residents at Hanceville Nursing and Rehab began getting vaccinated on Monday. Whether or not that will mean families can reconnect with residents inside the facility is yet to be seen.

In the meantime, Standridge said she understands families’ frustrations at not being able to hug or touch residents since March.

“I don’t blame them,” she said. “They’ve been very patient and understanding, and we’re ready to see this end.”

Sonny Mullins just wants a little normalcy to his visits with Hilda. At one point, months ago when the community spread of COVID-19 was not so bad, he was able to go into the nursing home and have lunch with his wife. He would stop and get her her favorite meal and they would have 20 minutes to eat together.

The nursing home would test him for covid at each visit and he would follow social distancing requirements. “Me and her would sit there and have dinner together,” he said. “You can’t do that now. I can’t go in there and see her and the other people I know there, but it’s what we’ve got to deal with.”