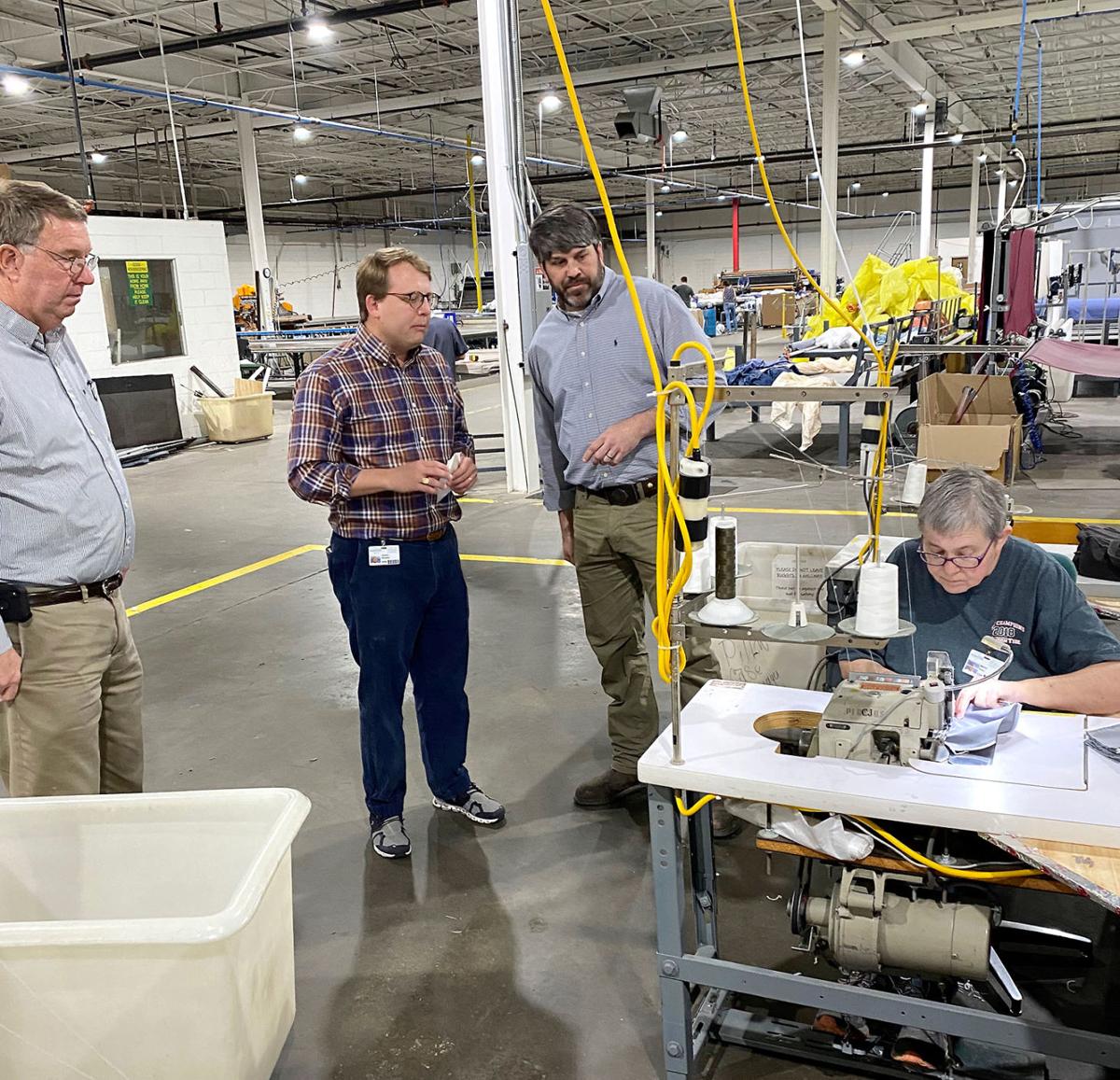 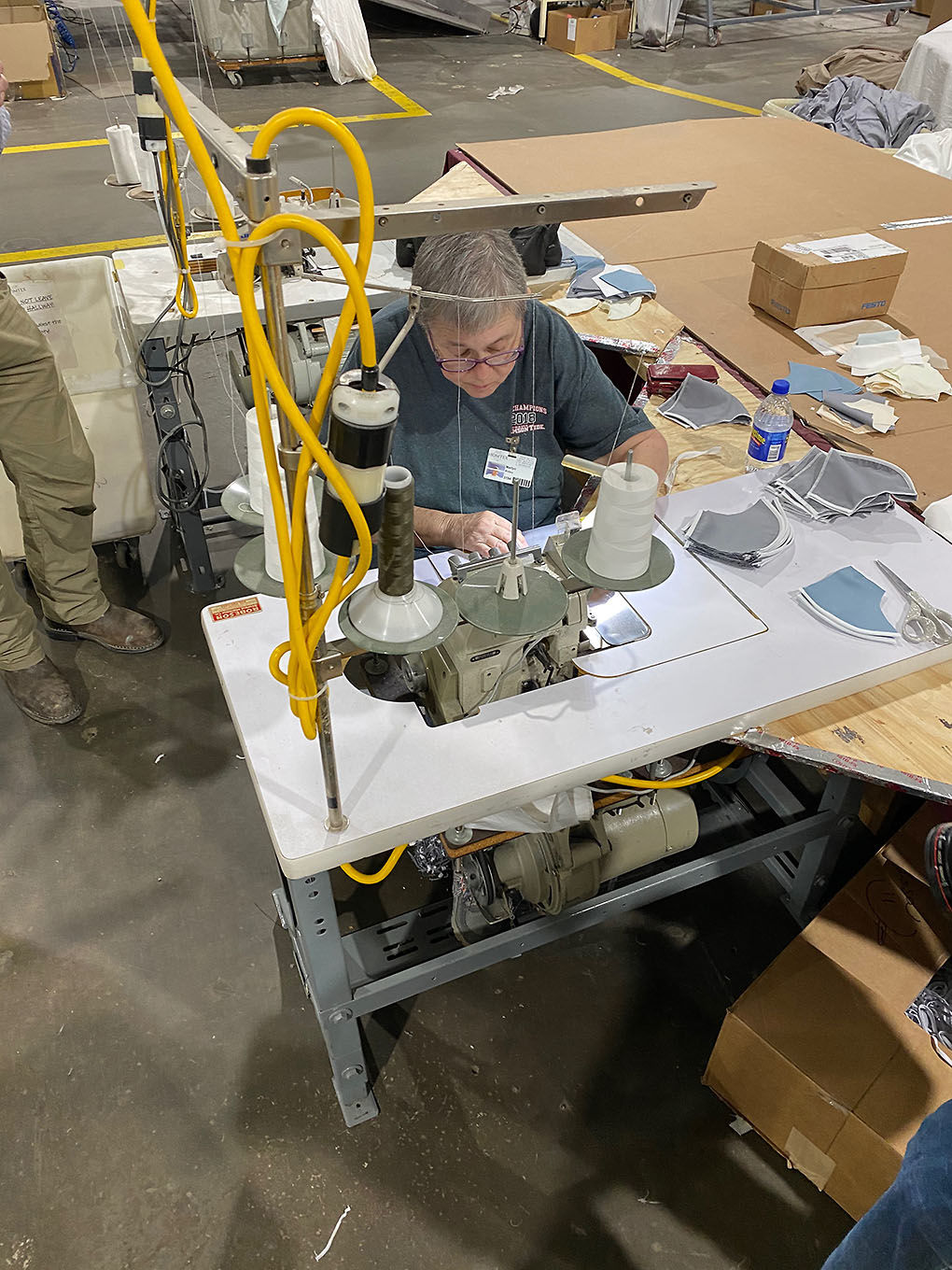 Marilyn Kelso works on a project Friday at Homtex.

Marilyn Kelso works on a project Friday at Homtex.

Beginning Tuesday, Cullman manufacturer HomTex will be switching its operations to begin producing masks for COVID-19. The need is likely to grow exponentially as new guidance from the Centers for Disease Control and Prevention encourages people, especially in areas hit hard by the spread of the coronavirus, to use rudimentary coverings like T-shirts, bandannas and non-medical masks to cover their faces while outdoors.

HomTex will be able to produce 100,000 washable, reusable masks per week to begin with. The masks are not approved by the Food and Drug Administration (FDA) for healthcare workers; however, state and federal officials are working with HomTex to get FDA approval for hospital use. They would not be used by front-line medical workers, who require a higher level of protection.

HomTex Vice President Jeremy Wootten said there’s a huge amount of interests in the masks, especially from the industrial sector. “And we’re going to serve our local industry first,” he said. The DreamFit face masks cost $4 each for a box of 20, with bulk discounts applying for larger orders.

Wootten said that they watched the crisis evolving and saw many sewing companies get into the personal protection equipment market. “We realized there might be a need, but we didn’t feel like that need would be that great from us; we thought there’d be plenty of people to service it,” he said. But over the past decade, the U.S. has lost so many sewing factories that even though they switched to making PPE, the need was still there.

The other issue is the non-woven, the material that serves as the filtration and protection fabric, that mask makers need and is hard to come by. HomTex had a supplier for the fabric because one item they produce are pillowcases for hospitals. “It is highly, highly specific and technical and there’s just not that many entities in the U.S. that can do it,” he said. “In the beginning, we thought there wouldn’t be a need but as it grew and grew over the second week and last week of March where we saw that we [the U.S.] couldn’t import and other factories couldn’t convert as quickly, it became obvious that it was going to be more than a need than we thought. And the demand has been incredible over the last few days since we announced that we were going to manufacture a domestic filtration mask that’s washable and reusable.”

The “washable and reusable” was a key component of the masks, he said. In talking to government officials, including the city of Cullman and Congressman Robert Aderholt’s office, one of the things that came up was that disposables are great but having something that a person could take home, reuse and wash, was immensely intriguing.

Because they have so much fabric on hand, they were able to make the washable masks. The big change, he said, was going from sewing large items to small. Fortunately, their designer came from Vanity Fair. “He has quite a bit of experience in the intimate category, where they’re used to handling smaller garments,” he said. “As a team we pulled some samples together and we were able to create what we thought is a solid product in terms of comfort and usefulness.”

“When you look at what has happened here, they’re retooling that plant in a week,” said Dale Greer, director of Cullman’s Economic Development Agency. “They’re going from making something nice to sleep on, to something that’s going to save lives.”

HomTex began in Cullman in 1987 as a small, contract sewing operation. Today, they have four plants in Cullman, Tennessee, North Carolina and South Carolina. All will be converted over to making masks, starting with the Cullman plant. Over the past week, Wootten said it’s felt like the early days for the business again. “We have millions of dollars worth of automatic equipment and materials handling this plant and I’m back to working on homemade tables and buggies right now,” he said.

The ability to switch over to producing masks comes at a good time for HomTex. Along with the anticipated recommendation that American wear masks, the company’s regular business, primarily big box and independent retail stores, “had come to a screeching halt,” said Wootten. When the stay-at-home orders began being issued, he said 90-92 percent of their regular customers shut their doors.

“This isn’t exactly a money making product for us,” he said. “We’re utilizing the filtration fabric that’s five times the market rate right now, but that’s what I had to pay to get it; my labor compared to what people make overseas, our labor is more expensive. But this keeps labor employed, keeps people in jobs and also provides us some overhead coverage to keep the lights on over the next few weeks

“It really is a win-win,” he added. “It keeps 120 local people employed at our plant and services the other facilities to keep people feeling safer in their jobs.”

Senator Garlan Gudger toured the factory on Friday with city officials. He, along with the governor’s office, city officials and Congressman Aderholt are working with the company on regulatory issues, including getting FDA approval for the masks.

“There is the greatest need and demand for what they’re able to do, and for what they will able to do,” he said. “Everybody is in need right now and we’re so blessed to have something like HomTex who can step up and fill that need,” Gudger said.

For more information about the DreamFit face masks, visit dreamfitfacemask.com.